Secret baby stories are often hard for me to swallow, particularly in this modern day when fathers are more involved in their children’s lives than ever before. Ordinarily, I likely would have set this book aside after the first chapter when it is revealed that the heroine, Fia, has kept her son’s parentage a secret for over three years with her only excuse that the relationship had been a one night stand. 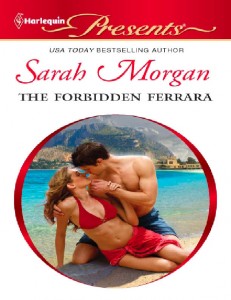 The Ferrara family and the Baracchi family have been feuding for two generations.  Santos Ferrara, a younger son, and Fia Baracchi shared one explosive and secret night with each other which resulted in the creation of Luca.

Santos reconnects with Fia when he decides that he will win back the property lost to his family two generations ago. He needs Fia’s cooperation, cooperation he stupidly (in my opinion) believes he will be able to obtain despite having a one night stand with her and never speaking to her again.  But this is Santos Ferrara and throughout the book, he is treated as a man who makes no mistakes and thus if someone like Fia would not speak to him it is only because she is a foolish child hanging onto foolish grudges.

While I was perturbed with Fia keeping Luca a secret from Santos, Santos never thought to connect with Fia after their one night stand either. Santos refers to their one encounter as a relationship but from the description, it more resembled an anonymous hookup:

Before tonight they’d never actually spoken. Even during that one turbulent encounter, they hadn’t spoken.

Much of the first half of the book was spent reading the two trade accusations, insults, and assumptions about each other. Santos assuming the worst about Fia’s parenting skills and Fia responding with barbs about his lack of experience with children. Santos is often putting Fia in a position to have to apologize. Santos, of course, is never wrong even when he is wrong. Weirdly, when Santos is incorrect, he never apologizes whereas Fia’s dialogue frequently begins with “I’m sorry.”

Santos assumes that Fia is a bad parent because she grew up in a shitty household.  When Fia explains that she would not want for her son the same childhood that she had, Santos questions how she could have even learned good parenting skills:

And if you know what mine was like then you should also know that I would never want that for my son. I don’t blame you for your concern but you are wrong. I do understand what a family should be. I always have.’

‘How? Where would you learn that? Certainly not in your own home.’ Her home life had been fractured, messy and unbelievably insecure because the Baracchi family didn’t just fight their neighbours, they fought amongst themselves. If family was a boat built to weather stormy seas, then hers was a shipwreck.

Santos even believes that Fia has allowed their son to be abused, at least emotionally, on the basis of his years ago past interaction with Fia.

Sweat beaded on his brow. He could barely allow himself to think about what his son’s life must have been like. What was the long-term impact of being raised in an emotional desert? And what if the abuse hadn’t just been emotional?

Santos doesn’t like that Fia uses nannies.  His aunts and cousins could watch Luca but no stranger and certainly not “paid” help. Interaction with Fia shows Santos that she is a good mother, but no apologies are forthcoming from Santos. His outrage and assumptions are justified.

He just took control, she thought numbly, the way the Ferraras always took control. Not once did he hesitate or fumble.

His insistence that they would be passionate lovers again and that he would make her feel for him made me uncomfortable. Certainly this was a romance book and that may be the end result but at the time he was making these delcarations, Fia had just placed her only relative in the hospital, was reeling from having to face the father of her child, and was doing her best to cope. Telling her that she was going to be naked and under him soon enough sounded like an ominous threat and not a passionate promise.

This book hewed so closely to a pattern of HPs and lacked the originality and freshness other Morgan HPs have brought. I wasn’t surprised at anything that came out of Santos’ mouth because it comprised mostly of him telling Fia what she was going to do, where she was going to do it, and how she was going to feel while doing it. Fia, for her part, lived up to the fragile adjective that was used to repeatedly describe her. She would often jump to conclusions which would necessitate her apologizing. “I’m sorry” was her regular refrain.

At one point, Santos admonishes Fia for appearing angry with him in front of the child. How obvious that Fia would be the one to be angry and not Santos because everything Santos does is either right or with the right intentions. Fia is the flawed one.  By the end, of course, Fia opens up beautifully as Santos predicted she would, under his tutelage and passionate hands, and they live happily ever after.  Blergh.  C-

→ Jane
Previous article: Open Thread for Authors (Author Promo) for June 2012
Next Post: Memorial Day Links (and Deals): A LipDub Proposal, Ways to Donate Books to the Troops, and a Recommendation