I was interested in The Fever Tree, your first work of historical fiction, partly because of this beautifully written excerpt at your site, partly because the Booklist review mentioned that it had a social justice angle (the novel is mainly set in late 19th century South Africa), and partly because of the pretty cover (yes, I’m shallow like that). 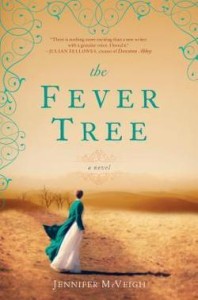 This book was hard, at times even painful to read and it left me with mixed feelings. But before I get into that, a plot summary.

The novel begins with eighteen year old Frances Irvine’s discovery that her father is unwell. Frances’ father is a successful furniture maker who rose from humble beginnings to marry above his station.

Frances’ mother, the daughter of a gentleman, died when Frances was a child, and Frances, the only child of their union, now learns from the maid that her father had a collapse – due, it turns out to losing his fortune in a bad investment. Frances fears she may lose him too.

With her father is Edwin Matthews, a doctor as well as a cousin of Frances’ on her father’s side. Like her father, Edwin comes from a community of poor Irish workers in Manchester, and it was her father’s generosity that helped Edwin obtain an education and medical training.

When Frances was a young teen Edwin came to live with them. His manners appalled Frances, and she found the way he watched her, especially when she played piano, disturbing. After they finish discussing her father’s condition, she senses Edwin is attracted to her, but she wants no part of him.

Frances has cousins on her mother’s side, too, and to them she is the unwanted family member. Her uncle only deigned to invite her to visit after his father’s death. Frances’ grandfather never forgave her mother for marrying down, and her uncle is very cautious about how much he is willing to do for her.

Thus, when, a few months later, her father passes away, her uncle tells Frances that he has received an offer for her hand from Edwin Matthews, who is in England just then but lives in South Africa. Frances’ aunt on her father’s side has grudgingly offered to take her in to a small, shabby house in Manchester full of children who need looking after, and those, says her uncle are the  two choices she has.

Frances is dismayed. She already turned down one proposal from Edwin, and now his persistence in asking to marry her has cost her a potential invitation to live with her uncle’s family. She turns down Edwin’s proposal, but later, when all her father’s possessions are sold and it’s almost time to go to Manchester, she changes her mind. Anything would be better than Manchester, even South Africa.

On her way to her future husband, Frances shares a ship’s cabin aboard the Cambrian with Anne and Mariella, two working class girls going to South Africa because it’s hard to find work in England. At first they seem foreign to Frances, but later she befriends them and even stands up for them.

Also on the ship is the handsome William Westbrook. William, Frances learns, is “partly Jewish,” the Whitechapel-born nephew of Joseph Baier, a man who sailed to South Africa to make his fortune and eventually became a diamond magnate and then sent William to Oxford for polish.

William has excellent prospects and he appeals to Frances far more than Edwin. This attraction is reciprocated: William flirts with Frances and once, during a storm at sea, even saves her life. Frances eventually allows him to touch her, and one night when she has drunk quite a bit, sleeps with him.

What will happen when the Cambrian docks in Cape Town? Will Frances choose William over Edwin or Edwin over William? More importantly, will she remain the spoiled, cosseted girl she was in England, or will she discover a hidden strength and integrity she did not know she possessed?

I have to admit upfront that reading The Fever Tree was, for long stretches of the novel, not a pleasant experience.

Although we get to know a couple of the black characters somewhat, the focus is mainly on the white ones, and to me this felt at odds with how much the book focuses on racism and the evils of colonialism.

Discrimination, bigotry and privilege are major themes here, with Frances initially disliking Edwin in part because he reminds her that she too has Irish bloodlines, and William attracting her because despite his half-Jewish status, he hobnobs with the powerful.

Once Frances arrives in South Africa, the exploitation of black South Africans by white colonists is all around her, everywhere, and one of the men in her life tries to stand up to it at personal risk, while another embodies it.

The fact that she was still torn between them at this point was very difficult for me, though of course, this was the point the book made —that often it is easier to conform with a social wrong than to do the right thing, which may come at personal cost.

Further, the N word is used casually by some of the villainous characters. A reader who finds any of the above painful, as I did, may want to avoid the book because of these triggers.

In my own case, I was also disturbed by the portrayal of Joseph Baier, the diamond magnate, when he appears on the stage. I understand that Baier has to be a villain, given his position of extreme power and his exploitation of black South Africans, but I’m not certain he had to be Jewish. Though some powerful investors in the diamond trade were indeed Jewish, Baier’s worst actions are based on those of Cecil Rhodes, the son of a Church of England vicar.

To clarify further, I don’t categorically object to Jewish villains, but I feel that when one is portrayed, it is extra important to avoid stereotypes. Baier’s portrayal skated very close to the edge of Nazi era stereotypes in that he was not only money-grubbing but also predatory and physically unattractive, though the latter was due to a corpulent physique and not to stereotypically Jewish features.

A scene in which Baier uses his knowledge of Frances’ personal life to blackmail her into rubbing his bare feet and breathes heavily while she does so struck me as offensive and I feel his power over her could have been portrayed in a more sensitive way.

I want to be clear, though, that the book also had a social conscience and took a stance against racism over and over. There is a scene in which a spoiled Frances, in one of her worst actions, complains about the laziness of a black maid and one of the men in her life reads her the riot act—I wanted to cheer when that last happened.

The love triangle at the center of the story frustrated me because it took Frances far too long to see the truth about these two men. One was strong minded, passionate about social justice and compassionate to others, while the second was power hungry, womanizing, immature, and by far the most damning of all in my eyes, openly racist.

I wanted to kill the second man, and I couldn’t understand why he had such emotional power over Frances, especially since during their first sexual encounter, her consent was in question. I can handle reading about unfaithfulness, but this man was so horrible that I didn’t feel Frances’ blindness where he was concerned was sufficiently supported in the text.

Two of the novel’s biggest strengths are its well-crafted prose and its scenic description of South Africa. So many images formed in my mind as I read it, and I especially loved the stark beauty of the Karoo, where Frances spends part of the novel.

I also enjoyed Frances’ turnaround, when it finally arrived. It was good to see her redeem herself in my eyes but I wish this had come sooner. I was a bit reminded of Kathleen Winsor’s Forever Amber when I read this novel because Frances took so long to come to her epiphany about the men, and more importantly, about herself and her own values.

As I said above, big stretches of the novel were difficult to read, and some even painful. Craft wise The Fever Tree was fairly well executed for the type of book it is, but it was also too triggering for me. C-.