REVIEW: The Duke Is Mine by Eloisa James

I confess that my dislike for the portrayal of one character in this book really overshadowed everything else.  I haven’t been following this new series of yours closely but I understand that you are revisiting classic fairy tales.  This story is based on the Princess and the Pea.  The Princess and the Pea is about a woman who is constantly tested for her worthiness as a partner to the prince by the prince’s mother.  Olivia is invited to the home of the Duke of Sconce so that her sister, Georgina, can be evaluated as a bride for Tarquin, the Duke of Sconce. 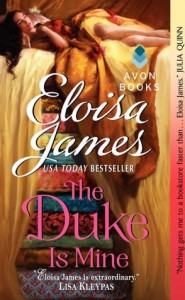 Tarquin was madly in love with his faithless first wife and after she died, he retreated to his mathematical studies.  His mother is relentless in her desire to see him remarried.

Olivia is betrothed to the heir to the Dukedom of Canterwick and has been since she was fifteen.  Rupert is five years younger than her and is dimwitted, short, slender, with a “potato shaped nose and penduluous lower lip.”  Rupert is clearly not all there and is the subject of scorn and mockery.  He is also about the only physically unattractive person in the book. Not only does he have the bad nose and puffy bottom lip, but his nose “just seemed to force one to pay more attention to his mouth. Which invariably hung open, his lower teeth visible in a glistening pout.”  Rupert’s father choose Olivia because of her “hips and brains”.  He tells her to bed the duke’s heir before he goes off to fight in the war.  Rupert, the heir, can’t get it up.  The heroine mocks him to her sister saying “neither two of his most important organs are functioning.”

What makes Olivia’s mockery of Rupert even more distasteful is that she is aware that he had lost air at birth.  The duke told her that to reassure her that her children would not be similarly affected.  At times, Olivia shows concern for Rupert but primarily because mockery of him reflects poorly on her.  When Tarquin is commenting on Rupert’s lack of mental faculties, Olivia decides to put up a resistance.

Of course she agreed, but she had realized when the duchess was so dismissive of Rupert that she could either spend her entire life listening to sniggers behind her husband’s back, or she could make it clear that no one should dare to insult Rupert to her face.

It’s not out of true concern or care for Rupert that Olivia defends him, but because she doesn’t want to listen to sniggers about him.  She can snigger, though, calling him a “little beardy-weirdly bottle –headed chub” and a “buffle-headed fool” and having “the brainpower of a gnat” and assigning him not so clever acroynms like “FF” (Foolish Fiance) or “HH” (Halfwit Husband).

When Olivia and Georgina arrive at the Duke of Sconce’s residence, Olivia and Tarquin aka Quin immediately are attracted to each other when Tarquin rescues Olivia from the rain.

I’ll insert a spoiler tag here although I don’t feel that the stuff is particularly spoilery.

[spoiler]Quin and Olivia spend much of the book  flirting and laughing and kissing each other even though Olivia knows that Tarquin is supposed to be for her sister who wants to be married but has been out for five seasons with no offers.  The sister even calls Olivia on her flirting and says she feels pale and lifeless next to Olivia. While Olivia feels bad for a second or two, it doesn’t stop her from continuing to flirt with Quin in front of her sister as well as engaging in inappropriate touching behind her sister’s back. The tension is supposed to come from  Olivia’s sister and Olivia’s betrothal to Rupert, although neither of which stop the Quin and Olivia  from engaging in their illicit activities.

Tarquin and Olivia have a moment of recognition that what they are doing might affect Rupert, acknowledging that for all his idiocy even he might understand the repercussions of Olivia throwing him over:

She nodded, but realized he was looking straight ahead, and said, “Yes.” It came out a croak. “He-he would be very hurt if I were to . . . It wouldn’t do.”

“A very English response,” he said, glancing down at her. “It wouldn’t do. But you’re right. The very worst thing any man could do to another, especially one serving his country, would be to steal his future wife. Perhaps when he has returned safely, we might discuss this further?”

I do feel some remorse about stealing you from Montsurrey. Stealing a man’s fiancée while he is serving his country is not entirely honorable.”

Olivia leaned against him, letting his heat warm her whole body. “Rupert lost air at birth,” she offered. “He will never be all that he could be.”

“We will always be friends to him.” It was a vow of sorts. “He had you, and now I’m taking you away, and I will never forget what I forced him to give up.”

Olivia sniffled ungracefully, took the handkerchief he gave her. “Rupert might be more resentful if you took Lucy.”

“I mean it,” she protested. “And Georgie agrees.”

So Rupert is so dumb, so baffle headed, that while he can be a war hero and execute strategic military maneuvers, while he went to fight for the glory of his family name “Must win glory for the sake of the family name”, while he was clever enough to make up a story about the two of them and keep a secret, he’ll not comprehend the insult that Tarquin and Olivia will have imposed on him. Yet, they will remain friends with Rupert.  How gracious!  The internal inconsistency of Rupert’s idiocy was played up and down for effect.

But shallowness is the byword for this book. Olivia’s big problem is apparently that she was fat. She self describes herself as fat frequently but no one ever slights her for it.  There was no indication that any one (but her mother) thought she was overly large, not her sister, not her fiance and not the hero, Tarquin.

Tarquin’s emotional arc was supposedly that he loved his first wife, but she cheated on him so he’ll never again marry a woman that he doesn’t love.  Right, that makes no sense to me.

Finally, the ending was completely bizarre and included two pages that involved whether some French woman was the best baker of bread in all of France.  Two pages.

What was the point of Rupert in the story? Was it to put on display the mistaken and ignorant attitudes of society toward mentally handicapped individuals and how some of those same attitudes exist today?  If so, where was the lesson in why these attitudes might be mistaken or ignorant? Further, why portray Quin as an absent minded scientific mind without drawing some parallel between Rupert’s disengagement with society and Quin’s similar path? “For example, he [Quin] seldom knew what the people around him were feeling. He had a formidable intelligence and rarely found other people’s thought patterns very surprising. But their emotions? He greatly disliked the way people seemed to conceal their emotions, only to release them in a gassy burst of noise and a tearful exposition.”  I think Tarquin was supposed to be written as if he had Asperger’s but it didn’t come across that way in any significant fashion.  Perhaps the tone of the book was too light hearted (interspersed with too many clever witticisms from Olivia) for mental disabilities to be of anything but a joke.

Was it to highlight the contributions mentally handicapped people provide?  If so, why do it in such a way that allowed Rupert to be torn down for most of the book?  Mocked and criticized by the characters?

Was it to provide a pivot point for Olivia’s character arc?  If this is the correct answer, I have to say, how distasteful.  Through Olivia and others, Rupert was mocked for being “dimwitted”, “limp”, and unattractive featured.  And where was the pivot?  Was it when Rupert went off to war and Olivia breathed a sigh of relief.  Was it when Olivia was sleeping with her sister’s intended?  Was it when Olivia worried that she wouldn’t be able to break her betrothal as conveniently if Rupert was a hero?  Was it when Olivia and Quin lay in bed and Quin felt somewhat guilty for cuckolding Rupert while Rupert was sacrificing his life for England?

Importantly, while Rupert is a central figure to the story, his point of view is never shared.  We only learn about him through the eyes of others.  Strangely, Quin is portrayed as having difficult time concentrating, his thoughts moving quickly from one topic to another.  But because he is an attractive, sexually powerful man his mental acuity is never in question, nor was his desirability.

Having said all that, the book is readable and readability is tough to pull off.  I’m giving the book a reluctant C-.

→ Jane
Previous article: REVIEW: The Lost Book of Mala R. by Rose MacDowell
Next Post: What Jayne’s Been Reading and Watching – November and most of December