REVIEW: The Demoness of Waking Dreams by Stephanie Chong

I hope that Harlequin isn’t marketing this as a romance because I can foresee a lot of unhappy readers if it was. The Demonness of Waking Dreams asks the readers to step into an Alternate Universe Venice and imagine that the world is populated by demons and angels who are engaged in some kind of battle, although it isn’t clear in the beginning. Nothing is clear in the beginning. Not what the two sides are fighting over. Not what differentiates the two sides. Part of this may be due to the fact that the book presumes that you’ve read book 1. There is a shared past between characters that is not only hinted at but may even provide groundwork for this story. Having not read book 1, however, I often felt like I was only working with half a deck. 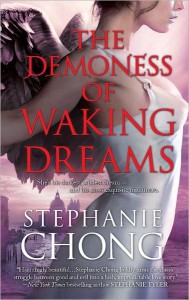 Demons must be “bad” because they can be “reformed” but I didn’t see the angels as very enlightened either. I think that is where the book faltered. No one was terribly likeable.

We know that 220 year old Luciana is a low level demoness who has developed a poison that could kill demons and thus angels. The angels determine that she must be destroyed and Brandon, an angel of only 10 years in the making, is sent to undertake this task. Luciana is built up as a formidable foe yet Brandon easily runs her down in Venice.

Brandon was a formerly Detroit cop who was killed on the job.  His dreams are haunted by his death. It’s fairly clear early on what the death dream hints at but Brandon never investigates. The book held few surprises except the ending. He left behind a widow and throughout much of the book I kept wondering, where is your widow, Brandon?  He has pangs of the loss of late afternoons lazing in his bed, but he’s never sought out his widow?

I wanted to see Luciana as this clever, resourceful demon who survived 200 plus years on her wit and demon skills but I found her to be a sad, almost pathetic creature who was easily caught by Brandon and ultimately being saved by Brandon again. In the opening scene, Lucianna is literally  just run down by Brandon even though she knows Venice better than almost every being, either living or not and Brandon has never been there before.  If a ten year old angel can chase down a 220 year old demon, where is the suspense?

I found Brandon to be a lout initially. I’m sure I was supposed to find his brawny, take no prisoners attitude sexy but instead it came off as brutish and sexist. The overriding themes of the book are about forgiveness and redemption. Luciana became a demoness because of her inability to forgive, her refusal to be redeemed. Brandon counsels Luciana on forgiveness not realizing how challenging it can be. But the way that both come to forgiveness and redemption seems to easy, particularly Brandon. There is little soul searching just, what appears to be easy acceptance. It could be argued that Brandon’s forgiveness is driven by his love for Luciana, but *what* Brandon has to forgive seems pretty big.  Does his ability to forgive arise from his angelic nature; from his inherent goodness?  Does Luciana’s inability to forgive or let go make her evil?

At the close of the book I’m left adrift. What is this book even about? Despite the traditional romance build and a great portion of the book spent in the characters’ headspace, it’s not a romance or so the ending tells me.  It’s not really a suspense or a thriller because the focus is not on any action, although, there are chase and capture scenes.  It’s not really an exploration of morality because the concepts of forgiveness and redemption are so haphazardly addressed in the text.  Great swaths of backstory and motivations are told via info dumps, often late in the book.

It is still kind of difficult for me to match this ending with Harlequin’s implicit romantic promise but oddly I wasn’t really upset about it because I hadn’t attached to either character.  I would advise readers to start label reading. It if is Mira, then it’s definitely buyer beware now from Harlequin for romance readers.  C-

[spoiler]Any romance reader will want to know that there is no HEA nor any HEA for now.  Luciana leaves Brandon and in the epilogue he hopes for a reconciliation but admits that he does not always even remember what she looks like.  [/spoiler]