REVIEW: The Dare by Hannah Jayne 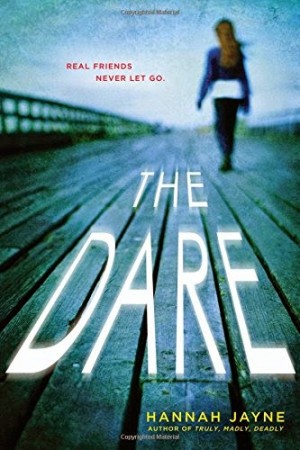 I’m fond of YA thrillers. I think it’s because I grew up on Lois Duncan and Christopher Pike. In fact, I still think of the earlier Christopher Pike books with nostalgia (Remember Me!) even though I’m not so keen on his later work. The Dare is a throwback to those old-school YA thrillers, WTF moments and all.

Brynna, the protagonist of The Dare, is a recovering hot mess. There’s no other way to put it. One night, Brynna dared her best friend, Erica, to jump into the ocean. Because Erica balked at the prospect, she agreed to jump in with her. Unfortunately, only Brynna came back and Erica’s body was never found.

Unable to deal with the guilt of losing her best friend because of her dare and the ensuing rumors, Bryn turned to drugs and alcohol and plunged into a destructive downward spiral. After a stint in rehab, her family moved so she could have a fresh start in a new place and new high school. Bryn immediately finds a new group of friends and settles into her new life, but then she starts receiving threatening messages that suggest Erica might not be dead after all.

Wow, this novel was strongly reminiscent of Lois Duncan’s thrillers. I was really reminded of I Know What You Did Last Summer. The only difference, of course, is that Bryn didn’t kill Erica. It was just an accident. She didn’t hit someone with her car and she didn’t actually try to conceal what happened. The only deception that occurred was her reticence about revealing her past to her newfound friends and that’s reasonable. No one, teenager or adult, wants to unload something major on people they just met.

I’ve of two minds about Bryn’s newfound friends. I like the fact that she wasn’t bullied for being the new girl. On the other hand, it seems awfully convenient that the cool kids adopt her into their crowd at first sight. I guess we’re supposed to accept this good fortune as whimsy but I had a hard time buying it. It was just so easy. Bryn barely said hello and suddenly she’s assimilated into their group.

I think part of my dissatisfaction comes from the fact that the relationships were barely delved into. They followed familiar patterns. The leader of the group adopts her but there’s nothing going on there because he’s gay. The hot guy of the group likes her and another girl in the group isn’t too happy about this because she has feelings for him. That said, I think these kinds of relationships are fine in fiction. Are they original? No. But they’re familiar to readers, and I get that. Unfortunately, that also means they need to be executed well and not used as lazy shorthand. I felt The Dare does more of the latter than the former.

Having grown up on all those old school YA thrillers, I thought the culprit was pretty obvious. There’s a pattern to these things. Maybe other readers don’t feel the same. I do question some of the red herrings, particularly those tossed in at the end. (Such as: What’s a couple of roofies between friends? Really? This is what we choose to go with?)

It’s because of those red herrings and crisis moments towards the end, when Bryn finds herself isolated, that I find the resolution so hard to believe. It falls flat. Mostly because if you don’t make me believe in the strength of those friendships, and show those relationships breaking under a stalker’s outside influence, why would I believe things will be sunshine and roses at the end? Instead of being believable, I found the ending — and especially the final line — to be eyeroll-inducing.

The Dare is a throwback to those old school YA thrillers where someone was after the protagonist, stalking them, endangering their life and ruining their reputation. I think 14-year-old me would have liked this book but the me-of-now wants a little more depth in character relationships for me to care. C-