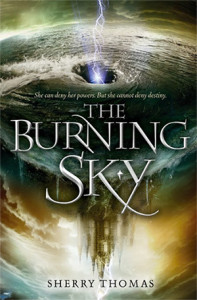 Unlike many of the other reviewers here at DA, I’m not familiar with your romance novels. I’ve only read one book from your backlist. But when I saw you were switching to young adult, I decided I would give your work another try. It’s a genre I’m more well-versed in, after all.

Traditional fantasy is still an underutilized subgenre in YA. Or it seems that way, at least, given all the paranormals/UF and dystopians out there. I can see how YA readers would be hungry for more, given the success of Rae Carson’s books. But coming from a traditional fantasy background, I’m picky. The worldbuilding and execution in the books I’ve read often leave me underwhelmed.

The Burning Sky uses many tropes in its construction. There’s nothing wrong with that. Tropes exist for a reason, and I’ll be the first person to admit I specifically seek out books because they use certain tropes. (Friends to lovers, anyone?) But I believe they should be used in moderation. Too many tropes, and the story gets bogged down.

Let’s start from the beginning. The Burning Sky is set in a sort of alternate Britain where there are two parallel dimensions, magic exists in one of them, and the denizens of the magical world can cross over to the nonmagical one. Based on my reading, I saw it more like the parallel worlds of the Black Jewels trilogy rather than Harry Potter.

Magical Britain is under the rule of Atlantis. There’s some longstanding conflict between the two that’s never explained so I can’t tell you what that’s all about. In fact, I can’t really tell you much about Atlantis at all other than they’re oppressing magical Britain. If I sound unimpressed by this, there’s a reason. I belong to that school of readers that considers Atlantis to be lazy, shortcut worldbuilding. If a novel is going to use Atlantis, it needs to do something with the mythos surrounding it. Don’t just drop it in a story and expect it to stand on its own. That’s just as bad as relying on pseudo-medieval-lite settings in your average traditional fantasy novel. (And we all know how I feel about that.)

The female protagonist is Iolanthe Seabourne. She is purported to be the greatest elemental mage of her generation. Yes, she is the chosen special one. The male protagonist is Prince Titus of Elberon. He is the prince who pretends to be an idiot while plotting to free his people from oppressive rule. He sees Iolanthe as the key to accomplishing his goal and intends to use her, even if it means their deaths.

How is Titus so sure about Iolanthe’s role in all this? His mother was a seer, and she left behind a journal full of her visions. You could say it was a prophecy. But he miscalculated. He assumed the key to destroying the Bane of Atlantis was going to be a male elemental mage. Instead, he gets Iolanthe, a girl. What does that mean? It means Iolanthe must disguise herself as a boy! But what’s to keep Iolanthe tied to Titus? After all, he’s a complete stranger expecting her to sacrifice her life for his goal. Why, a magical bond, of course!

And so it goes. My main problem with The Burning Sky can be reduced to this. I can see the tropes as pieces and none of them fit together smoothly. The story never gelled for me and in fact, read very deliberately put together. Maybe I could have forgiven this if the writing wasn’t so dry and unemotional. More emotional writing might have masked the obvious construction better. As a result, I could never sink in because I could see the strings clearly.

It’s not just because I’m not a fan of the “girl pretending to be a boy” trope either. The fact is, the way the trope was used in the novel lacked risk on Iolanthe’s part. The whole point of the trope is that the girl’s true gender can be discovered at any moment. This means any number of threats such as walking in while she’s changing or taking a bath; or her getting an injury that requires medical treatment and therefore, a physical examination. I’m sure readers can think of other examples. It’s a common trope.

But in The Burning Sky, none of these things happen. The main risk to finding out Iolanthe’s true gender? The other students might realize she’s too pretty to be a boy. That’s not a legitimate risk of discovery. That’s just a way to show Titus thinks she’s hot. For the most part, Iolanthe’s crossdressing masquerade goes off without a hitch. This is even taking into account Titus’s magical interference. Things that should be a problem are not. For example, she knows nothing about cricket but she still manages to be an ace player. Amazing athletic ability does not translate to team sport playing genius. I love strong female characters, but the way to show their competence is by putting them under pressure and showing how they excell under duress, not by making things easy for them.

The burgeoning relationship between Iolanthe and Titus is rife with problems. As readers can guess, the two are attracted to each other. After all, we’ve covered all the other tropes. Why not this one too? But their relationship starts off massively imbalanced, in favor of Titus. He controls the information Iolanthe gets and manipulates things so that she has no options but to stick with him. The fact that Iolanthe falls in love with him despite that didn’t sit well with me. In addition, we’re also supposed to be okay with Titus falling in love with her while treating her horribly and controlling her life. That does not speak well of him at all. Power differentials are tricky to portray in romantic relationships, and the execution here didn’t work for me. I was actively repulsed by their dynamic.

Given how many people are fans of your work, I suspect this is a case of me simply not connecting to your writing. I have no objections to the use of tropes in a story, even a lot of them, but at this point, I prefer more subversion when they’re used. When they’re played straight, I’m afraid it doesn’t work for me and that’s just too big a hurdle for me to climb. C-