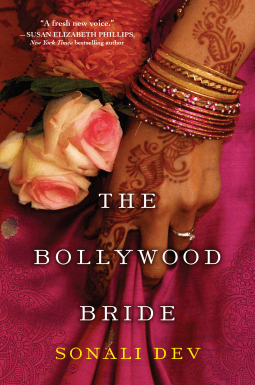 Ria Parkar is Bollywood’s favorite Ice Princess–beautiful, poised, and scandal-proof–until one impulsive act threatens to expose her destructive past. Traveling home to Chicago for her cousin’s wedding offers a chance to diffuse the coming media storm and find solace in family, food, and outsized celebrations that are like one of her vibrant movies come to life. But it also means confronting Vikram Jathar.

While I enjoyed most of “A Bollywood Affair” and this one started off well, by the end, I was forcing myself to finish and couldn’t wait until it was over. I know it’s Bollywood, I get that. But after slogging through a book’s worth of (melo)drama, I’m tired, so tired, of it.

This really isn’t an immigrant story. Ria has lived for lengthy periods of time both in India and the US and is comfortable in each. There are aspects of each she both loves and dreads but honestly all the characters in the book, are settled, doing well and the story focuses on the people unlike in the first book.

I liked the glimpse into the preparation for a traditional Marathi Indian wedding – and would love to nosh the food – and the actual ceremony. The view of the love that surrounds the engaged couple from all their friends and family is heartwarming. What joy went into all this and what hopes the family has for Nikhil and Jen. ::happy sniff:: Kudos for also not footnote explaining every Indian thing in the text. Instead facts and words are blended into the narrative and if readers want to know more, they can research it later on which allows the flow of the book to continue.

This is a dark book. Much darker than your first published one with haunted hints that are slowly revealed and then eventually explained. Ria and Vikram are broken with pain and suffering. She hides it by being the Bollywood Ice Princess. Vikram’s actions after she broke off their engagement reveal how terribly it hurt him and the way he lashes out at her now show how deeply he’s still wounded. These two can make each other bleed gallons of anguish from the wounds they inflict. But then the whole family can keep secrets – even from each other. The whole denial of the truth and the pain it has created is enough to make my head hurt.

I was holding my breath to see how the mental illness aspects of the plot would be handled. I view Ria’s mother’s mental illness as something like major post-partum depression/psychosis possibly with schizophrenia though obviously I’m no expert. A few times over the course of the story, there are little things Ria experiences that Ria fears might be signs that she’s inherited her mother’s illness such as constant noises in her head that she tries to control. She also appears to have mild OCD. The question of if she might have any mental illlness is left up in the air by the end of the book but on the whole, I think the subject was handled with sensitivity.

Now just about everything else? Nah, for various reasons it didn’t work for me. Only Ria’s POV is ever seen which tells us all her thoughts and feelings but the only way to know what Vikram feels is by his actions and his actions, initially, are shitty and designed to inflict the most pain on Ria. I know he was badly hurt in the past and maybe, as Ria says, this is a 10 year old hurt being lanced and finally avenged. But as well written as it is and as much as I can understand his pain, I’m not really enjoying almost a third of the book being the hero inflicting it. Especially if this is initially all we see and know of him.

I acknowledge that Ria does have rock solid reasons for why she signed the film contract and why she pushed Vikram away. Her family would be so shamed by the reality behind her initial rise to stardom in her first film and she doesn’t want anyone outside her aunt and uncle to know about her mother or her fear that she’ll eventually go insane like her mother.

What doesn’t work for me is Ria’s martyr complex. She spends most of the book selflessly sacrificing herself to save Vikram though he is right, IMO, when he takes her to task for making the choice for him without giving him any chance to decide for himself. And not just once. No, she does it over again. I will give credit for how you changed my opinion on Vikram yet at the same time, my feelings for Ria 180’d as well and not for the better.

There are also several “loaded gun” secrets I was waiting to hear go off. Ria is afraid of quite a few things – exposure of her scandalous relationship with a major Bollywood star (and I didn’t see that any damage possibly done to her sexual psyche was resolved) which started her career, her family’s mental illness, and specifics about the incident which killed her father and another. Yet when these are dealt with, it’s more like a child’s toy gun popping rather than an explosion from a .45. Everything is neatly and sweetly over with few if any repercussions for Ria.

After looking forward to this book, I finished it let down and grumbly. The wedding stuff was great but for me the romance and relationship parts weren’t. Part of this is personal as I just don’t prefer so much angst and melodrama in my reading but a lot was due to how even the melodrama ended in such a damp squib, fizzing out fashion. And when I end a book feeling sorry for one of the main characters that they got the other one – due to her propensity to pull back and hit the happy trail rather than work things out, well, that’s just never a good sign. C-