REVIEW: The Bodies We Wear by Jeyn Roberts 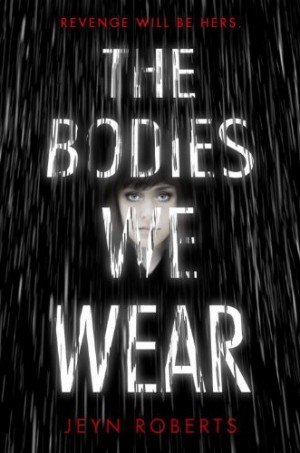 My thriller kick continues, this time with one falling into the science fiction genre. I’ll be the first to admit that the science fiction is light in The Bodies We Wear, which is fine with me because I’m not in the mood for a rigorous read. Your book almost has a dystopian feel but I’m pleased to say that this isn’t a case of dystopian masquerading as an SF thriller. Publishers have tried that before, and it’s never worked.

In the near future, a drug called Heam reigns. Highly addictive, it has the effect of showing users a glimpse of a place many consider heaven. But it has some other side effects. People who overdose come back marked with a spider’s web over their chests. Thus marked, they’re ostracized by society — unable to complete an education, get an job, which in turn only encourages them to pursue their addiction.

Faye is a survivor of a Heam overdose, through no fault of her own. Her father was a Heam dealer and when things went wrong on his end, his boss went after Faye in retaliation. While Faye’s best friend died, she survived. Unfortunately, her mother kicked her out and eventually Faye was taken in by a former detective.

Driven by revenge against the men responsible for ruining her life and killing her best friend, Faye trains day in and day out in the hopes that one day she’ll be ready. Then one day she meets a guy named Chael, who seems strangely familiar and makes her begin to question her mission.

I thought this book had a promising concept. Even the beginning worked fine for me, but as it continued, I found myself frowning at various point. For example, the book makes a point of talking about how Heam is “so” dangerous, that in some countries, creating and distributing it results in the death penalty, not just a life sentence. This displayed an ignorance of international drug to me since many countries already have anti-drug trafficking laws and it is already an automatic death sentence. This is not actually a change.

Another thing that kept bothering me was the death of Faye’s best friend, Christian. Christian’s death is the primary impetus for her revenge quest. That’s fine. But she goes on and on about how Christian was the love of her life. This happened when she was 11. Now I’m willing to buy that you might meet your soulmate very young, but I’m not quite so willing to believe that you’ll recognize them as your soulmate until you’re at least in your teenaged years. It doesn’t seem like a big difference in years but I can buy this type of declaration in a 15- or 16-year old, not in an 11-year-old. I just couldn’t buy it as a motivation.

Chael’s true identity was not a surprise or a revelation. It was obvious very early on what was going on there, so I found it irritating that Faye took a huge chunk of the book to put the pieces together. Part of it is also that I didn’t like Chael at all as a love interest. He stalked Faye and he constantly came down hard on her mission. We all know how I feel about stories where random boys who come along and tell the girl they supposedly like that their way of doing things is wrong. You’ve known each other for 5 minutes, come on. And in particular, there are things he does later in the book, that take away Faye’s agency and choices, which made me unable to like him.

The Bodies We Wear isn’t entirely bad. I liked Faye’s experiences in school and wish we could have seen more of her trying to have a normal life in spite of the overdose stigma. I liked her attempts to help other overdose survivors. There are passages that I really loved:

“The bodies we wear,” he says. “They’re not the ones we always want. They get damaged. Used. It’s who we are on the inside that counts. The person waiting to jump free.”

The bodies we wear can only take so much damage. We wear them down and eventually they stop working. But I now know that who we are lives on, even without our bodies.

A lot of my dissatisfaction with The Bodies We Wear stems from mislaid expectations. I went in, thinking I’d get a revenge story. What I got was ultimately more of a meditation on life and death, what we do with the time we have and what happens after. I don’t want to spoil the ending but let me just say, if readers expect an HEA, that’s not what happens here. C-