REVIEW: The Auction by Kitty Thomas

Your work was recommended to me as an ‘out of the box’ self-published erotica writer that has a lot of fans, but whose works are not for everyone. I flipped through your works and settled upon The Auction because the blurb mentioned that she was bought by a monster. I was hoping for a Beauty and the Beast type of story. This is not even close. Instead, it’s a D/s story about a woman that is purchased by a dragon-like man and made to service him and his brother. 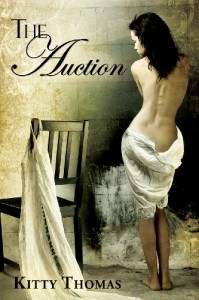 Belle is a young woman in the city on a planet that is vaguely dystopian. From the worldbuilding, readers should infer that this is a planet that has been cut off from almost all society and the little colony lives a simple life. It made me think of the Shyamalan movie The Village in that aspect. At a certain age, all women are auctioned off to a man that they will belong to. Some women are happy to be auctioned off, but Belle believes in hedging her bets. She blows a lot of men behind the community center in the hopes that one of them will purchase her and secure her future. Instead, she is bought by a monstrous looking man – one of the ‘monsters’ on the outskirts of the city and sent to live with him. There, she exists in sexual slavery to him and must decide how she will cope with being owned by him.

While your writing is very easy to sink into, I had a number of problems with this story, and perhaps it is me not being a fan of Master/slave, it’s hard to tell. I found Belle rather unlikable. She waffles back and forth between hating Master (the only name she is allowed to call him) and adoring him. She’s quick to toss down blowjobs to secure a far-off future, but when her future is here, she’s suddenly reluctant to be owned by the man she was blowing, or her new master. She runs away even though it’s dangerous and she has nothing to run back to. I found this difficult to root for.

The ‘Master’ was a character that was very lightly sketched. All I knew about him was that he had sex toys on hand, a really high body temperature, and a big package. I cannot speak to his personality, and I think that’s a lot of the problem of this story – it feels as if corners were cut. I am not against his character, but I’m not for it either. I simply don’t care either way, because as the reader, I’ve been given nothing but a horrifying description (he looks like a cross between a dragon and a man and has a forked tongue) and am told he likes to dominate his human.

I enjoyed your writing and found this to be a very brief, mostly grammatically clean read. It was 57 pages according to the Amazon webpage, and I think with double the pages, you could have made the sex a little more erotic, the characters a little more nuanced, the world fleshed out. As it was, this felt like it skimmed the surface. There was one scene that I found a distinct turn off, and I have to chalk it up, again, as not my kind of story. This will be an author I won’t be picking up in the future, I don’t think. The voice was very readable but the story ultimately lifeless.