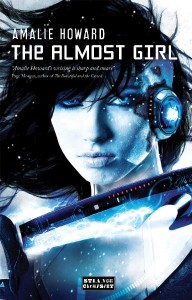 I’ve been in the mood for some YA science fiction so when your novel popped up on NetGalley, I perked up. The premise had potential. Parallel universes and a girl sent from one to another to find the twin brother of the crown prince of her own world. Yes, I realize this sounds like the science fiction equivalent of a portal story and you’d be correct but while I dislike portal stories in fantasy, I am fond of multiple universes in science fiction. What can I say?

Riven is a Legion General of Neospes, an apocalyptic world that was ravaged by a devastating android war. When the health of her best friend, the crown prince, begins to fail, she is sent to our universe to find his twin brother, who was hidden there at some point in the past, because the twin is her prince’s only chance of survival.

It takes three years but Riven finally finds Caden, Prince Cale’s twin brother. Now she has to bring him back to Neospes, but that’s easier said than done. Soldiers called Vectors have been dispatched from Neospes to take out Caden and bring Riven back to her home universe. In addition, there are the Guardians who have been charged with preventing people from jumping back and forth between universes. Worst of all, Riven begins to fall in love with Caden — a problem since the sole reason she’s bringing him back to Neospes is because he’s Prince Cale’s organ donor. Oops.

I was initially enamoured by the worldbuilding. No surprise to anyone who knows me. It was so interesting. There’s the contrast between Earth and Neospes. Given that Riven comes from a ravaged world, I can understand her fascination with earth and its massive amounts of water. There’s also the fact that jumping back and forth between universes has clear consequences in The Almost Girl. It’s hard on the human body and eventually, it begins to break down. If you jump too much, you die.

Sad to say, the novelty of the worldbuilding wore off quickly. I liked the idea of Riven. Despite being young, she’s a Legion General and feared warrior in Neospes. I was willing to accept her being a prodigy. Her father is an important scientist of Neospes, after all.

But here’s the thing: I expect prodigies to be smart and clever. Riven isn’t. The boy she’s been looking for these past three years? Is in one of her classes. How does she not notice this? He looks like the Crown Prince who she considers the most important person in her life! That’s a major oversight, if you ask me. Also, I have to point out that making out with a boy in the house you just broke into is a rather unfortunate tactical error.

I also don’t think it’s unreasonable to expect a Legion General to be a kickass warrior, right? That’s a logical conclusion to draw considering fighters in Neospes prove themselves in a sort of obstacle course arena. But despite the fact that Riven does fight a lot, she also… tends to lose. A lot. She’s constantly knocked unconscious. In fact, her first meeting with Caden is triggered by her falling off her motorcycle. Speaking of Caden, the boy she’s supposed to bring back to Neospes saves her more than once and I don’t just mean the motorcycle accident. I mean in actual fights. I hate this trope. Oh, here’s a kickass girl but she can’t be too kickass. The guy — despite not growing up on an apocalyptic world filled with killer robots — is somehow just as good as, if not better than, her!

There were other things that bothered me. Riven makes a point to say that sexual assault doesn’t exist in Neospes because girls are taught to fight back. It’s not an issue that Riven is a Legion General, by which I mean there are no sexist comments directed towards her by the people who know her identity. But despite these apparently positive things, the book is filled with slut shaming. Riven is constantly calling Caden’s girlfriend a slut and a bitch. I guess only one type of “strong girl” is allowed? Any girl who doesn’t live up to these standards is a bitch. Any girl who’s feminine, blonde and thin must be a slut.

The connection between Riven and Caden is 100% pure instalove. I was never convinced she wasn’t just transferring unrequited feelings for Cale to Caden, who’s more approachable and accessible. I never really understood why Caden was into Riven other than the stereotypical “she’s so different from other girls” reason, which I think speaks for itself. It was also hard for me to get into their relationship because Caden did have a girlfriend and not only did that seem not to matter to him, the way he treated and talked about her was crappy. What a catch.

A brief highlight was Riven’s sister, who has been hiding on Earth, protecting Caden. I’m predisposed towards fictional sisters and their relationship promised juicy narrative twists. Riven was the favored daughter while the sister was branded a traitor. This backstory would definitely rebound into the present. But alas, it was — as I said — brief and over too soon.

The Almost Girl is an action-packed, plot-heavy novel. It definitely moves at a fast pace and I appreciated that. I just wish the plot developments weren’t so obvious and cliche, and that the characters were more likeable. C-