REVIEW: Taking Him by Jackie Ashenden 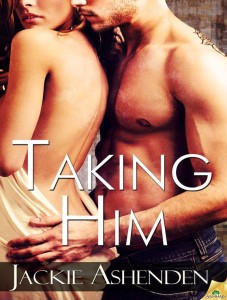 I really love your voice but man this book did not work for me. The heroine came off terribly selfish and given the extent of the hero’s emotional abuse, her constant pushing didn’t come off well. So the guy’s not into you. I get it, but stop making him feel guilty for it.

Ellie Fox is in love with her older brother’s best friend, Hunter Chase.  Hunter has adored Ellie as a little sister but because of his past believes she’s better off with someone else rather than him.  Ellie is preparing to leave for a new job in Japan and wants to try one last time to get Hunter into bed with her.

She pushes and pushes his buttons knowing that Hunter has never been anything but kind to her.  And frankly despite declaring she was a fully grown 25 year old woman, she acted like a child. Refusing to come home from a bar when she was drunk, unzipping her clothes and exposing her breasts when he asked her not to. (I kept thinking of what would I think of the situation if the roles were reversed and Hunter had his salami out and was shaking it at Ellie saying ‘look at me. look at me.’)

Ellie is unable to understand that when Hunter verbalizes his no, she should back away. I guess this is reversed forced seduction? She sees desire in his eyes and despite him adamantly wanting to avoid her, disregards his stated wishes and pursues him. But it wasn’t even her pursuit of him that really bothered me but it was the way that she threw his friendship in his face and basically told him that if didn’t fuck her, he was hurting her.

Shit. Wrong again. It could get more painful.

“Why?” she couldn’t stop herself from asking. “Am I not pretty enough for you? Not sexy enough? Is that it?”

“No, Christ Ellie, no. It’s not any of those things. I don’t…feel that way about you, all right?”

“And I can’t change your mind?”

Something moved in his eyes but it was gone before she could tell what it was. “No. I’m sorry, you can’t.”

Ellie swallowed. “Okay, fine.” She struggled to keep her voice level as years of forbidden fantasies came crashing down around her ears. “I got it. Loud and clear.”

“I’m not saying this to hurt you.”

Well, you have.” Oh she’d love to pretend she didn’t care, but the fact was that she did. Very much. And there was no reason for him not to know that.

So guilt trip for not wanting to have sex with her.  The unease over Ellie’s portrayal in this book deepened when we learn more about Hunter’s past. Granted Ellie isn’t privvy to what the reader knows but it’s hard to eliminate that information when confronted with Ellie’s actions. Hunter wanted Ellie to back off because it was painful for him and I wanted Ellie to back off too. And given that she was leaving in three weeks, I wished she’d acted a bit more maturely. Of course, if she did there wouldn’t be a book. And I’m sure I am supposed to understand that without Ellie’s persistent pursuit, her forced seduction of Hunter, he’d never be able to get over his demons and have an HEA.

I get that intellectually but my emotional response to the book was a recoil. Maybe if this had been told solely from Ellie’s point of view, it would have been easier to root for her and want a positive outcome but knowing Hunter’s deep painful secrets made Ellie’s behavior all the more egregious in my eyes. I realize that’s unfair because Ellie’s in the dark, but my reader response was to tell Hunter to run far away from Ellie.

It’s a dark book and I appreciate the role reversal, although it might not have been a conscious one. Without a clear line of consent, Ellie’s pursuit of Hunter left a bitter taste in my mouth. C-