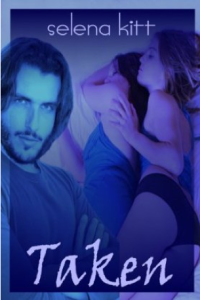 I checked out your backlist on a recommendation from a DA reader. Many of your stories feature content and situations that do not appeal to me, but competently written f/f/m is hard to find and I can’t afford to be choosy. I bought Taken because I thought it was a romance.

The story is told in first person by Lizzie, a telemarketer. It begins with some light-hearted banter between Lizzie and her boss, Sarah. Lizzie teases Sarah about one of their coworkers, David. He’s “older, practically old,” but hot. He carries a torch for Sarah and asks her out every weekend. To Lizzie’s consternation, Sarah always says no.
On this particular Friday, Sarah makes up the excuse that she and Lizzie are having a girls’ night. As soon as David is out of earshot, Sarah invites Lizzie over for real. They get caught in the rain and end up hanging out at Sarah’s apartment in their underwear. The dialogue between them is very natural and friendly, almost familial. Looking over it a second time, I found several references to their respective ages. Lizzie is 22 to Sarah’s mid30s. Twice, Lizzie says that Sarah “sounds like her mother.”

They have a comfortable evening together, compliment each other’s beauty, and have sex. Does that sound abrupt? It was. Although the scene is detailed and sensual, not rushed, I felt disconnected from the characters and disinterested in their encounter. There were no furtive glances, no hint of attraction between them. They just…went at it.

Sometime in the middle of the night, Sarah wakes Lizzie up to call home. Lizzie lives with her parents and Sarah doesn’t want them to worry. I found this scene jarring and indicative of a recurring theme that became problematic for me. May-December romances are not my favorite. Same with boss-employee. Lizzie’s lack of independence, paired with Sarah’s nurturing touch, gave me a strange feeling. And not the good, tingly kind.

So far this is an interesting, well-written story with no sexual tension and an age/maturity difference. But it’s not a romance, because Lizzie is not a romance heroine. She’s an inexperienced college student, trying to find herself. She has a steady boyfriend but she doesn’t give him a second thought when she sleeps with Sarah. Although I found her actions believable and realistic, I didn’t like her.

Infidelity was an issue in the last story I reviewed so I picked a passage that highlights this theme and gives a taste of your writing style:

I couldn’t stop. Once we started, I just couldn’t stop. And I didn’t tell Tim. I tried, a few times, after one of our quick and fumbling encounters in the back of his Firebird, to tell him about the sweet and magical and amazing things I’d discovered with Sarah. I loved Tim—he was kind and thoughtful and he tried very hard to please me—but we’d been having sex for over a year and I still hadn’t once had an orgasm in his presence.

Since my relationship with Sarah began, I’d asked myself more than once if I might be gay instead of just bi…but my love for a hard cock and, more importantly, men, simply made that impossible. Still, I didn’t think of my relationship with Sarah as “cheating” on Tim. How could he compete? It was like apples and oranges. Where he was hard, she was soft—there was just no comparison to be made. They gave me such different things.

Sarah has better chemistry with David, who notices that the women have become special friends. If Lizzie had plotted to bring David into the bedroom for Sarah’s benefit, I might have found her character more appealing. But no. Lizzie makes the suggestion because she wants to come with a cock inside her and doesn’t think she can do it without Sarah.

***SPOILER***
[spoiler]We find out that both Sarah and David are divorced, and that fertility problems led to their broken marriages. This emotional reveal creates a bond between them. Sarah invites David home with her and Lizzie. I’m pretty sure he knows what he’s in for. Lizzie falls asleep on the couch, waking up to watch Sarah and David make love. This is the only scene I found truly sexy. When Lizzie joins them, it feels like an intrusion. David doesn’t complain, but there is no indication that he wants anyone besides Sarah.

You’re a great writer and I enjoyed parts of Taken. But I didn’t care for the narrator and I felt robbed of the actual love story. David and Sarah’s first kiss happens off the page, Lizzie is a non-entity, and there is no happy ending. Without the paternal undertones, it might have been pretty hot. I’m not sorry I read this but it just wasn’t good for me. C-.