Last year the first book in the Honey Grove series was one of my surprise hits making my sparse Top Books list. I was so eagerly awaiting this follow up that I haunted your website and Amazon watching for word of its release. When I finally saw that the e-arc was available, I zipped Jane a request to ask for a copy and did a happy dance in anticipation. My feelings after finishing it are making me wonder if I’ve become a h8ter or if I was just hoping too hard for lightning to strike twice. 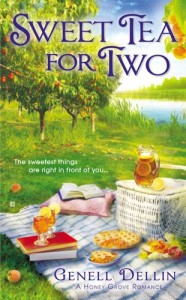 Rock Springs, Texas is a quiet little town where everyone knows everyone else and makes everyone’s business their business. Lilah Briscoe was in the center the town’s speculation last year when her long lost granddaughter, Meri, finally came home for a funeral then blasted out of town and back to NYC as fast as she could before personal heartbreak brought her back. In an effort to save Lilah’s Honey Grove Farm from foreclosure, the two eventually (pardon the pun) cooked up a plan to open Honey Grove Kitchen using produce bought from local farmers and made into organic goodies. Along the way, Meri also became involved with local bad boy Caleb Burkett – the one who up until then had been a rolling stone and thorn in his asshole father’s side.

With Caleb as a third partner in HGK, the romance is continuing but there’s a new threat on the horizon in the form of developers who want the area rezoned to allow farms to be bought up and turned into bedroom communities. Horrified at the thought that she still might lose her farm and that the community could be irretrievably changed, Lilah is determined to browbeat the local judge, who is running for reelection, into a vote against rezoning before she tackles her neighbors into voting for him and against his opponent. Meri is hellbent on HGK being a success which isn’t doing her perfectionist tendencies, blood pressure or romance any good. Caleb wants to help her but with a ranch to build up from dirt and a father to spite at any opportunity, he can’t always just drop everything to fuss over fruit. Can the Briscoe women keep their heads, their hearts and their livelihood from going under?

Early in the story, someone complains to Lilah that she always thinks she knows best. Well, she does and she spends the book almost bashing people over the head with her views and trying to force them to see things her way because she certainly isn’t about to try and see the other viewpoint since it’s wrong. No that’s not strong enough. It’s Wrong!! When the POV of the chapters swung back to the election and Lilah’s tireless efforts to show everyone how right she was and how wrong any other possible outcome would be, I groaned. Enough already, I don’t care anymore about this or about the two older gentlemen vying for Lilah’s attention. The actual election and determination of the zoning brought me no joy beyond the realization that this plot part was finally done with.

Unfortunately, Meri and Caleb’s romance left me equally wanting. I had thought they were well on their way to a HEA at the end of “Honey Grove.” Not quite there yet but cruising along the highway of love as two mature adults. The book opens with a charming scene of the two of them, working together, seemingly happy. How quickly that all falls apart and I feel as if I’m back reading square one with their relationship. Okay, I can deal with a couple hitting a few speed bumps but not the one note “cry in your beer song” this turned out to be. Meri soon begins to wind herself tighter than trebuchet and fling rocks on Caleb’s head because he dares – he dares! – to actually spend time working on his ranch rather than work himself into knots over every detail, trivial or otherwise, of HGK. How damn dare he! And each tiny event at which he doesn’t spin out of control is more proof that he doesn’t love her and that their relationship can never work. Never, ever! I get her abandonment issues and her need for perfection which all stem from her childhood with a feckless mother but by the time she veers towards a hissy fit over the tartness of a load of apples I wanted to smack her. Apples, Meri? Really? I’m surprised her kitchen staff didn’t beat her over the head with a bottle of lemon juice.

I suppose I could have dealt with a bit of both Lilah and Meri going off the deep end if it were only once or twice and if there had been other things to balance these two issues. But instead the whole book revolves around these and little else. On and on with it until I was nearing the end of the book and and counting down the pages until I was done. The anticlimactic zoning issue wasn’t helped by the whiplash changes in the romance which left me disbelieving in Meri’s change of heart at Caleb’s change of heart. I can tell that more books are planned for Honey Grove but I don’t know if I’ll be along for the ride even if you do know how to use “y’all” and portray a small Southern town. C-