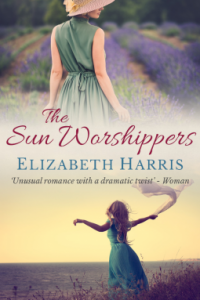 I have some TRIGGER WARNINGS for the book. As I mention, Aaron is very controlling and after a while, it bothered me even if he never harmed Fay. There is also a sudden almost rape scene in which Fay escapes by the skin of her teeth.

The long-awaited Grecian escape has finally arrived but when Fay Leary arrives in Corfu after nightfall with nowhere to go, she fears that the dream holiday planned for herself and her two young sons may quickly become a disaster.

Her panic turns to surprise when she manages to secure local accommodation with ease at the airport with the mysterious ‘Bull-man’… The stranger offers them accommodation in the elegant Twins’ House whose namesakes, a handsome duo, smoothly take over the organisation of her trip.

Then out of the shadows steps the mysterious Aaron, who rescues Fay from a seemingly innocent cultural evening which turns out to be a meeting of hostile strangers. Not only does he stir up a peculiar feeling of recognition inside Fay, but she feels strangely attracted to him.

During the idyllic weeks of her holiday, Fay and her sons spend more and more time with Aaron and the twins and the suspicion that she is being drawn into something predestined begins to grow as the story of her own tragic past unfolds. It seems that Aaron is igniting something inside her she didn’t know existed.

Fay realises she has entered a place where the past is reality, where two worlds overlap, where myth becomes more than a tale told in the dark …

Some of your books work well for me while others don’t. They’re all different, I will say that though. Like all the other books, this is a dual timeline story but this time both are within Fay’s life – her current trip to Corfu with her sons and her past beginning romance with their father. One thing that kept pulling me up is that it was originally written in 1990s back before parents watched their children like hawks spying meal. The boys are always being looked after but the casual way Fay just accepts that the Twins will keep them safe and then wanders off is jarring.

Fay and the boys get lulled into a wonderful holiday. Sun, sand, swimming and gorgeous twin men who seem to magically sense everything needed and provide it with calm dignity. Fay jokingly begins thinking of them as Castor and Pollux while they’re also called the Dioscuri. Then one evening she meets Aaron, she thinks quite by chance – or was it? It’s like she’s always known him and he can hear what she’s thinking as he often replies exactly to thoughts running through her head. Cue lazy “Twilight Zone” music. But it’s not – often – alarming to her. He tells her he’ll explain it all, in time.

Even certain locations on the island seem to be “places out of time.” It all gets revealed so gradually that it doesn’t initially raise alarms but after a while, when Fay finally started thinking – well, actually communicating – “Hold on now, bro. This is strange.” my thoughts were, “Yeah, about time you clued in, Fay.” Yes, the epiphany slowly arrives both for Fay and for us as I had some idea what had happened in her past that haunted and tormented her but not the whole sad truth. I ought to – having lived with an alcoholic – but seeing the destruction of Fay’s love for someone was still painful.

Aaron has his moments of scariness when he violently “controls” other people. He never does this with Fay – Fay is almost too precious given we don’t know everything about the relationship and situation – but sometimes with others, he’s very frightening, alpha in a bad way since he seems to have some kind of power over them. At the same time, it’s creepy how he begins to maneuver Fay even if he says it’s for her benefit. The power imbalance, which never changes, irritated me. At times he seems to play with Fay’s mind and beliefs like a cat bats around a toy then acts all surprised when she doesn’t understand.

From the events of the prologue, it’s obvious Aaron might have greater powers than we’ve seen so far. Still Fay’s question “Why me?” is legitimate to me. Yes, why her if Aaron is some kind of Other, as I suspect. Why after all the years – and from what he tells her his long efforts to help people – is Fay The One? Because she can sense deeper? Meet his mind? Is curvaceous? Hmmm, maybe all this and more. But then my immediate thought is what will her future hold? This whole woo-woo stuff is unsettling even more so than the Samhain Night story. It does make one think, though.

Religion in general gets the boot here but Christianity in particular. The redemption message is applicable to anyone though. The message that Fay’s husband Barry was responsible for his own destruction, while technically maybe true, strikes me as harsh. He was weak in the face of an addiction few can beat.

For me, the strength of the book is in Fay and her boys. Their relationship is “grand” as Barry would say. Fay’s also a competent person who has had to be the strong one in life – something I understand and feel is beautifully conveyed here. Aaron is too much of a mystery for too long and uneasily controlling once he moves more to center stage. Despite how much he seems to care for Fay, I never felt comfortable with him and, this should have been more important to Fay, he never interacts with her sons much.

I liked a lot about this book but there is a lot more that is disturbing – and yes, I admit this will be a personal issue with readers as to how much, if at all, it is. There are also some things which are not explained for a long time after being hinted at which is annoying. Then when they are discussed, it’s vague and “well, this might be true or maybe just a myth to entertain the credulous.” The ending is rather nebulous as well though with a distinct feeling that in the end, whenever that is, all will be well for Fay and the boys. As such I think it’s more women’s fiction than a true romance and my grade is more for the dreamy, unreal ending, irritation at the uneasy bits and delayed resolution of the romance plus the uneven power balance than anything else. C-

→ Jayne
Previous article: REVIEW: Dirty by Kylie Scott
Next Post: Open Thread for Readers for May 2016