I found this book to be a curious thing and one that I would love for others to read so that I could discuss it with them. Pia Blyton is a succubus but one with an aversion to hookups and one night stands. Because of this, Pia is often a hungry succubus because succubi eat through the acquisition of orgasms. They also feed others, like incubi, by basically regurgitating the energy absorbed through their orgasms into little vials. (This, of course, reminded me of wolves and how the adults would eat food and then throw it up into the mouths of their wolf pups, yum). 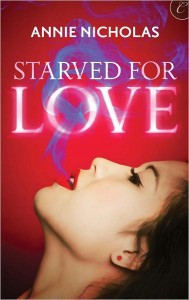 Pia has three “suitors” although why they are called this, I’m not certain. They aren’t courting her for marriage. Instead they are all part of a long term committed relationship wherein they have sex with Pia on a schedule, allowing her to be fed regularly without Pia having to go seduce random strangers. One of Pia’s suitors is a socially shy wolf shifter.  Another is half demon and the third is the head vampire of a local nest.

An incubus comes to town and Pia’s father offers up her older sisters as potential mates, but once Val experiences Pia, he decides she will be his seventh wife.

There was a delicate dance played out in the story that tries to walk the line between developing a traditional romance between Val and Pia and an elevation of the polyamorous marriage. It wasn’t entirely successful but it was interesting.

In order for an incubus marriage to work, there can be no jealousy. The wives are fed by having sex with the incubus husband or with another random source. They, in turn, feed him by siphoning off energy gained through orgasm. There are rules for fidelity. The incubus having sex with another woman not his wives is considered cheating but feeding off another’s energy is not. The wives having random stranger sex is okay, but having sex or gaining energy from someone she might have feelings for is not.  These rules seem arbitrary.  How do you quantify the feelings one might have for a sex partner. When does it cross the line from merely feeding into cheating?

Pia comes from a family with one incubus and several sister wives. Their family unit is stable and loving. It is Pia’s search for love which leads her to having these aversions to hookups.  She actually fell in love with a human once and ultimately ended up weak and starving for lack of “food.”  One supernatural male cannot provide her with the necessary sustenance and certainly no mortal could.

There were any number of interesting ideas raised in the book, some of which I briefly touched on before.  But others include Pia’s lovers.  One of Pia’s lovers is the vampire master of the city, a sexual deviant who is deemed “evil” by many but one who treats Pia tenderly (or cruelly as she desires). The relationship that Pia has with Sin seems to go beyond that of casual sex. He maintains a certain propriety around her that seems unresolved at the end.  There is a suspense or mystery involving the disappearance of one of Pia’s lovers. This seemed to go either nowhere or something to set up a later story.

The relationship between Val and Pia is definitely a push/pull and the dynamic kind of bored me (and confused me). What was more intriguing was Pia’s belief that she could bring Val and his current ,but somewhat estranged wives, together to a true family unit where sister wives worked together to make a home. In the end, I felt like this was book wanted to tell a story about a non traditional love but at the same time kept the boundaries of a more traditional romance and as a result, the story didn’t really work.  C-