I picked up your fantasy romance, Spy’s Honor, because although the previous book in the series, Assassin’s Gambit (reviewed here and here), wasn’t perfect, it was entertaining and interesting. It turns out that Spy’s Honor isn’t a sequel to Assassin’s Gambit, but a prequel. 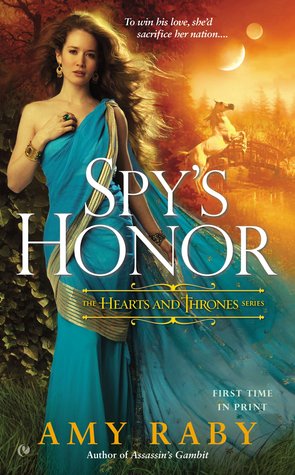 Spy’s Honor begins with the arrival of Jan-Torres, Crown Prince of Mosar, in Riat, the capital city of Kjall. Jan-Torres is not on Kjall for a diplomatic mission, but as a spy. Kjall, which has an empire and an impressive military, is currently prosecuting a brutal, expansionist war in Mosar.

As Mosar’s prince, Jan-Torres should be in Mosar, but as it happens he is also a shroud mage, capable of hiding his presence and anything else with an invisibility “shroud.” Jan-Torres accomplishes this through a telepathic link with his familiar, a ferret named Sashi with whom he shares a telepathic link.

Jan-Torres hopes to be able to meet with Ral-Vaddis, a missing spy who has not reported in a while, or if that is not possible, to find the crucial information Ral-Vaddis was close to uncovering when he last sent word to Mosar.

Also in Riat is the Kjallan emperor’s niece, Rhianne. When we first see her, Rhianne is sneaking out of the palace using its hypocaust system to go into the city and visit a disabled veteran she and her younger cousin Lucien are supporting via a “pension.”

Rhianne’s room is constantly under guard since her uncle Florian, Emperor of Kjall, believes that Rhianne is wild (this is belief is due not to any action of Rhianne’s, but to her mother’s decisions prior to Rhianne’s birth), and is strict with her as a result.

In fact, Florian insists that Rhianne accept the suit of his general Augustan and rule Mosar at Augustan’s side once the Kjallans have conquered it.

It is on the palace grounds that Rhianne first meets Jan-Torres, who through the aid of two Mosari slaves is masquerading as a slave named Janto. “Janto” is working in the garden when Rhianne attempts to learn the Mosari language from a book. He corrects Rhianne’s pronunciations and a tentative friendship between them begins.

Rhianne is attracted to the educated slave, and when Jan-Torres discovers that the Mosari slave women are being raped by the overseer, he approaches Rhianne about it and they work together, in conjunction with the women, to put a stop to these assaults.

Jan-Torres reveals his shrouding ability to Rhianne in the process and she begins to suspect he is not a slave at all, but a spy. Since she doesn’t want to bring about his death but also refuses to betray her country, she tells him he must leave Kjall in a matter of days or else she will turn him in to her uncle.

But a visit from Augustan, the man Rhianne must eventually marry, changes things. Augustan is cruel and Rhianne’s friendship with Jan-Torres has opened her eyes to his brutal practices in Mosar. When her cousin Lucien advises Rhianne to indulge in a fling before her unwanted marriage, Rhianne chooses Jan-Torres to be her first lover.

A turn for the worse in the war forces Jan-Torres to grow bolder and, shrouded with invisibility, he infiltrates the imperial palace without Rhianne’s knowledge in search of the information his spy never delivered. Will Jan-Torres be discovered by the Kjallans? And what will happen to Rhianne if he is?

Spy’s Honor has some things going for it but unfortunately it never captured my imagination in the same way that Assassin’s Gambit did. The main characters were nice people, Rhianne sheltered and sensitive but stubborn in hewing to her convictions, and despite his matching stubbornesss, Jan-Torres never turned into an alphahole.

As with Assassin’s Gambit, there is an almost breezy tone to the writing and while it doesn’t always fit with what is happening in a given scene, it still manages to appeal to me—a sure sign of a strong voice.

The worldbuilding was a bit more thorough in this book than was the case with Assassin’s Gambit. In addition to a description of a forest with unusual trees, there was a brief explanation of the three gods, the Soldier, the Vagabond and the Sage, and the battle tactics in the second half of the novel were as well-developed and impressive as mentioned during a previous discussion.

Other aspects of the world, though, felt underdeveloped to me. There wasn’t much in the way of descriptions of the imperial palace and I would have liked to gain a better understanding of how Rhianne’s magical ability to confuse people worked. I also prefer magical systems in which there are costs to using one’s magic, as I find it makes magic more believable, but such wasn’t the case here for either Rhianne or Jan-Torres.

The other problems I had with the book range from minor to major. First, Sashi, Jan-Torres’ ferret familiar, for all that he contained part of Jan-Torres’ soul and played an important role in the storyline, was a paper-thin character, with an obsession with killing but few other ferret-like or human characteristics.

Second, the sex scenes didn’t work that well for me. The greater part of this was due to the dynamics between the couple—Rhianne being an inexperienced virgin and Jan-Torres providing her introduction to lovemaking made for familiar ground.

A smaller degree of this was due to the language. Rhianne referred to her physical desire for “Janto” as a feeling like an “unscratched itch” multiple times. The first time I thought it interesting, but when it was repeated it became unromantic and jarring.

Third, the hypocaust was used too many times in the story.

At one point the emperor discovered that one of the main characters had used it to their advantage against his aims, but even after that it was successfully used again.

Fourth, I thought Jan-Torres had too easy a time of it masquerading as a garden slave. I expected the overseer to recognize a slave he never acquired and expose Jan-Torres as a spy, but this never happened.

Fifth, I was discomfited by Rhianne’s physical attraction to Jan-Torres when she still believed he was a slave. She discovered the truth quickly, but before that, the difference in power between them made her lustful thoughts unsettling reading, as did the fact that neither Rhianne and Jan-Torres acknowledged that the circumstances made the attraction sketchy.

Sixth, even outside the sex scenes, the relationship dynamics were far less interesting in this book than the dynamics in Assassin’s Gambit. In the latter book, there was an interesting reversal of gender roles, with Vitala the assassin and later bodyguard to Lucien. Here, Rhianne was sheltered and innocent, a much more standard role for a romance heroine, and Jan-Torres had more life experience. That dynamic just wasn’t as interesting to me.

Finally, perhaps the biggest problem in the book was the absence of conflict from the first half in the book. Yes, Jan-Torres and Rhianne are on opposite sides of the war, but we don’t really see that affect their psyches that much. Jan-Torres says meeting Rhianne is what taught him that Kjallans could also be good people, but it’s not a transformation that is ever shown on page.

Jan-Torres has a backstory that nags him a bit but it doesn’t appear to be a significant trauma. The slave overseer who rapes the women is stopped easily. And I could go on. Every time a potentially interesting conflict–either external or internal–appears on the horizon, it’s batted away as easily as a fly.

As a result, by the second quarter of the book, I was bored. My reading stalled and I almost didn’t pick up the book again. And those other problems I mentioned? I probably wouldn’t have noticed all of them if I had been more absorbed.

Fortunately, in the second half, a significant external conflict emerges at last, and in the final third, there’s even (hallelujah!) a conflict between Jan-Torres and Rhianne. I enjoyed those sections of the book more, but I can’t say I was ever swept away.

I’ve read worse books than Spy’s Honor, but after the promise of Assassin’s Gambit, I can’t help but be disappointed in it. Because I like the authorial voice, I still plan to read book three, Prince’s Fire, but I think I’ll wait a bit. C-.