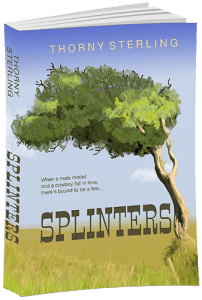 Waking up in a strange place isn’t a first for model and actor Allan Seville, but discovering himself alone and bound to a rough plank in the middle of an open Texas range certainly is. With no memory of who did this to him or why, panic sets in, until rescue comes riding up on a big, brown horse.

There’s more to Duke Walters than a handsome face and sexy drawl. In the arms of this rugged cowboy, Al discovers a peace and safety he never knew he needed, and now doesn’t want to be without.

But someone wants Al out of the way and drugging him during a movie junket in Houston is only the beginning. A world of differences may separate this cowboy and diva, but when danger strikes again, Duke might be the only one who can get them out alive.

A fellow reviewer alerted me about your book landing in DA submission folder and asked if I would be interested in reviewing it. When I glanced at the book, I remembered that I previously bought it as a gift for a friend who liked your blog posts. I have read a couple of your blog posts and I think once I participated in the online discussion where you commented as well, but this is the only communication I have ever had with you. I decided that I was curious enough to review your book.

I had a really hard time with it because for the most time I was wondering whether the book was supposed to be a parody of all the clichés we see in m/m romances or just a sweet romantic comedy with a somewhat clumsily included suspense plot. Sadly, after finishing the book I am almost sure that no, it was not supposed to be a parody. There was also an issue with characterization of one of the main characters which I feel extremely uncomfortable talking about mostly because as a straight woman I am not sure if I even should. But I am not sure how to talk about the book if I were to omit it.

I wonder if part of the problem was that what the writer was trying to write was a romantic comedy with Very Insta!Love setup (minutes is all it takes for Allan to notice Duke in a big way, 24 hours is all it takes for him to decide that he can’t live without Duke), but was also trying to find an unusual hook for it. Well, the story certainly started with a bang, when naked Allan wakes up in the middle of the ranch with no memory of anything and Duke finds him.

For a few minutes after he wakes up Allan is extremely upset. No wonder, right? I would be upset too, if somebody kidnapped me and violated me the way Alan was violated. However, after a couple of more minutes when he looks at Duke and Duke unties him and takes the splinters out of his ass, here we go. Allan’s attention is diverted towards how incredibly attracted he is to Duke and how very awesome he is. Let’s forget for a second the fact that I usually have trouble buying Insta!Love, it takes a lot to convince me of it, but what I had trouble buying even more is that a traumatized guy would completely forget about his trauma after he sees his rescuer because he is awesome. That’s all happening minutes after Allan regains consciousness mind you, *minutes*. Sorry, I could not buy it.

To be fair, Allan does not completely forget about what is happening to him later on (after his incredible attraction to Duke kicks in) – he is worried, he is nervous. But I still thought that his reaction was off as to how a person after trauma would react. I especially could not buy him not wanting to leave the ranch, until another bad thing happens and only then does he finally leave. I just cannot see it in my mind that in such a short time after a major trauma a person would pay attention to anybody’s attractiveness. I want to be very clear – I get that anything can happen in real life, it is just the writer did not convince me that Allan’s reaction made sense. It felt off, as if the love story needed to be meshed with suspense storyline and it did not happen in an organic way.

The suspense is not suspenseful at all, the suspect is mentioned in the beginning of the story and he ends up being the one who attacked Allan. I just did not feel that suspense storyline *fit* except to be an artificial reason to create tension and conflict between the guys. I think romantic comedy was the goal. I could be wrong.

And this brings me to Allan and his romance. Allan is a femme guy, and I am using the word “femme” because character uses this word. Allan also uses the word “androgynous” to describe himself. Here is the thing – Allan’s femininity is probably the only thing that is going to stick with me now that I’ve finished the book. After all, he repeats it many times. I suspect it was done on purpose because author was conveying a message that “femme gay men deserve respect”. This is a quote from the book. I think this is a great message, but I wished for more nuance and detail in Allan’s characterization. I mean that I wanted to know something else about the guy besides him being androgynous, being femme, whatever the best word is. I learned that he could stick his head in the clouds and decide that the guy who helped him after his assault is the one he wants after knowing him for a day (less actually I think). I suppose he is a nice guy based on how he talked to Duke and others, but besides that, I am not sure what I really know about him.

“I have the hands of a pianist of a painter. Really, all of me is this man’s foil. Where he’s hard masculinity, I’m sleek androgyny. He’s a few inches taller than me, but must outweigh me by close to a hundred pound of solid muscle. And I love the contrast between us. I’m a sucker for men like him.”

Duke also does not have a lot of depth for me as a character. He is Allan’s knight in shining armor, and he’s definitely a sweet guy as well. I am not sure he had much complexity beyond that.

I liked the resolution of suspense story on one hand, because so called villain of the piece was treated with compassion, but on the other hand some things bothered me because the guy was mentally ill. And I also wondered if what happened to him was possible in Texas, because I have no idea.