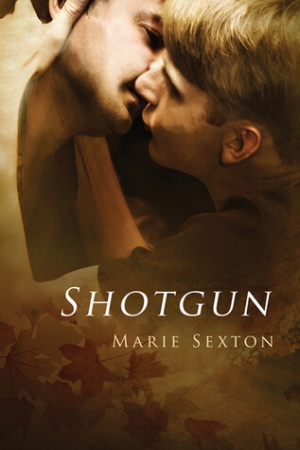 Part of the Coda Series

As a young man, Dominic Jacobsen already suspects he’s gay, and he gets all the confirmation he needs when a rich boy from out of town climbs into the back seat of Dominic’s GTO. One night with Lamar Franklin is all it takes to convince Dominic he’s found the man of his dreams. Unfortunately, that one night is all he’ll get before Lamar returns to Tucson.

Fifteen years later Lamar returns to Coda, Colorado, after ending the latest in a string of bad relationships. He’s alone, depressed, and plagued by late-night phone calls from an unidentified caller. Lamar’s ready to give up when he comes face-to-face with his past.

Since he was seventeen, Dominic has dreamed of a reunion with Lamar, but that doesn’t mean he’s ready for it now. Facing small-town rumors and big-family drama is bad enough, but Dominic won’t risk losing custody of his teenage daughter, Naomi. The only solution is to make sure he and Lamar remain friends and nothing more. Clothes stay on, no matter what.

It seems simple enough. But for better or worse, Lamar has other ideas.

I loved your “Coda” series. I thought the stories of six guys forming relationships and becoming friends in the small town of Coda ended on just the right note, but I was definitely eager to read this book when I learned that a new couple will be front and center.

I am typing this review and sighing unhappily even though the romantic chemistry between your characters was so very lovely – every time Dominic and Lamar were together, I could feel it. Why am I unhappy? Because although romantic chemistry is very important to me when I read a romance novel, I just cannot completely check my brain at the door. I can’t. I need to believe in what is taking place within the narrative and too often I could not do so.

This started almost from the beginning. Seventeen year old Dominic and Lamar have a night of self–discovery and love making which Dominic hopes will be the beginning of romance between them. But Lamar was leaving next day and it left Dominic heartbroken.

The story picks up fifteen years later when Lamar comes back to Coda. He has just ended a long term affair with a married guy, finally sick of the guy never following through on promises to leave his wife for Lamar.

Neither Dominic nor Lamar ever forgot about each other and both had dreamed about being reunited one day (especially Dominic, I thought). Now, I get that reunited lovers is one of the main romance tropes and sometimes I can buy it, but it all depends on how it is executed. Two years, three years? Maybe. Five years? Oh, I don’t know. Fifteen years – no, sorry. I could not overcome the suspension of disbelief – just how empty and unhappy must their lives have been that they could not forget each other? This was not just a first love, that would be at least understandable. It was one night, at seventeen. Obviously everybody has their own threshold and maybe other readers can deal with this version of the trope better than I could. As I said, the prologue that takes place when they were seventeen was beautifully written, but I could not believe that they would still want each other that much fifteen years later.

“But …” Dominic let his protests fall away. What did it matter? It wasn’t as if they could change it. They were from different towns, different schools, different words. They were nothing more than kids in a universe run by adults. But it seemed so unfair. They’d only just found each other.

Lamar took a deep breath, biting his lip nervously. He leaned across the seat and kissed Dom one last time, soft and gentle. No tongue this time. No passion or urgency. This kiss was sweet and chaste and innocent, and held such a sentiment of finality, it made Dom’s chest ache.

When they reconnect fifteen years later, Lamar is not in the best shape. He’s depressed, he’s teaching in Coda’s school where not all the other teachers accept him, and in addition it seems that he acquired a stalke who vandalizes his car and over the course of the story steps up some nasty activities.

The handling of Lamar’s depression was a huge disappointment. When I started reading I was thinking that m/m books seem to be handling depression in a much more sensitive way. I’ve recently read three or four books where depression was handled as an illness that cannot be kissed away by love – the other person is adding support and strength, sure, but sometimes therapy is needed too and sometimes medication is needed.

And this book started well too. When Dominic’s daughter Naomi tells her father that their new teacher (Lamar) may have depression (her mom had suffered from depression so she knew the signs), Dominic tells her :

“Well, you can be friendly. You can ask if he is okay. Let him know you are worried. But you know how it is. All the good intentions and cheery speeches in the world may not be enough. Sometimes it takes medication. Sometimes it takes change in routine. Sometimes it just takes time.” I spread my hands. “Sometimes nothing helps at all.”

She frowned and tapped her phone against the table. “It sucks.”

So, since the book is told in alternating first person POV (one chapter is narrated by Lamar, one by Dominic, and they switch till the very end), we do initially hear from Lamar how depression makes him feel couple of times. But then it just disappears. Completely. It is not that I mind hearing that he was better, or I think he necessarily needed medication, but I needed some indication about how and why he got better. I cannot believe he miraculously woke up one day and had no more depression! It is not even cured by love, it is as if writer decided – oh no more mentioning of this story line. I suspect, but of course I cannot be sure, that when Dominic and his daughter plotted to get Lamar a cat, it was supposed to make him feel better. It is not that I am disagreeing with therapeutic value of the animals, but if the kitty cured his depression completely maybe it was worth mentioning?

The conflict between the guys consists of Dominic being scared to come out of the closet because he worries about what his daughter and some of his family may think, and I sympathized, I really did. I often feel so bad for closeted characters and get angry at the society which made them feel so scared. But did he have to treat Lamar so badly because he was scared? I want you, but we cannot do it, I won’t abandon you, but I did. I am so sorry, I won’t. No, let’s end it. It became very exhausting at some point.

I liked that they ended up together. I was pleased to see Matt and Jared and even Zach and Angelo, but I was glad when this book was over.