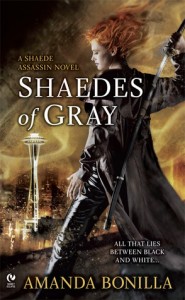 Darian is an assassin. She makes it a point to only kill people who deserve it but there’s no getting around what she does for a living. She kills people and she does so well. Until now.

Darian is also a Shaede. Shaedes are supernatural beings that can turn into shadow at night. Very effective ability for an assassin. People are usually born Shaedes but a select few — the powerful ones — can turn others. The process to become one isn’t very clear — no exchange of blood likes vampires, no bites like werewolves — so I’m guessing it was something mystical.

Darian was made into a Shaede. The man who turned her into one vanished many years prior and is assumed dead, so she assumed she was the only one of her kind. After all, that’s what her maker told her so why should she have any reason to doubt him?

It turns out he lied. Darian is not the only one of her kind. In fact, she’s been recruited back into the fold for specific particular mission. And to succeed at this mission, she’s got to train for it because while she was good against humans, it turns out her current skill level is nothing at all compared to other Shaedes and the man she now has to kill.

I really wanted to love this book. It had promise. Finally, a female assassin who’s hard and not depicted to be incompetent in the opening pages! But as the book progressed, I realized that while I like my female assassins to be hard, I also prefer for them not to be complete and utter sociopaths dissociated from their emotions. Now I assume that to be a good assassin, you need to be able to dissociate to a certain extent, but there’s compartmentalizing and then there’s being emotionless. It makes it hard for me to like Darian.

For example, Darian’s backstory is that she was an abused wife. Yes, I’m sure everyone is surprised that the tough as nails heroine had a tragic backstory in which she was beaten by her husband. At least she wasn’t raped. On the other hand, the reason the husband beat her was because he was closeted gay and resented it. Talk about cliches and stereotypes! A woman can’t become strong unless she was abused? The gay man is evil? Really?

But that’s not even the point I was trying to make. You see, when the abusive husband gets what’s coming to him, Darian watches the scene unfold with no reaction at all. I would have taken anything. Hysteria. Cheerfully jumping in to help. Screaming and running away when she realizes that the man they invited into their house is in fact a murderer! Her dropping to the floor and saying, “Okay, kill me next.” Anything! Instead, I got nothing. She just stood by and watched.

Now you could say her lack of reaction was a sign that the abuse had affected her. That she could no longer feel. But based on the rest of the book, I don’t think that was what was intended at all.

I also found her to be willfully ignorant. It’s not just her actually believing they were the only ones of their kind. It’s the fact that she didn’t stop to think that there were other supernatural things walking around. And to tell the truth, I can’t help but think badly of a supernatural character who has no idea what a Jinn is. When she was human, sure. I can buy that lack of knowledge. But Darian’s been alive for a long time. She lives in modern-day Seattle. She doesn’t know that jinn=genie? Let’s not even get started on the fact that while Darian insists on only killing evil people, she doesn’t actually confirm that the people she’s killing are evil! She trusts her handler, Tyler, to vet everything. I know it’s just a personal preference but I really want my protagonists to be smart and clever!

There’s a romantic subplot but it feel really flat for me. I had no idea why Tyler was so in love with Darian. Was it a genuine emotional connection? Some sort of supernatural soulbonding? Both? Who knows? And I personally found the insistence that Xander was a rival for Darian’s affections to be laughable. I found the scenes where Darian interacted with Xander to be lacking in romantic or sexual chemistry at all. Trying to see Darian as being torn between Tyler and Xander was impossible despite the book telling me that Darian was attracted to Xander. I didn’t see that at all and every time the book told me that, I made a face.

Which brings us to the final point. This book is a lot of telling. It’s also a lot of withholding information for the sake of withholding information. I really dislike this. I knew who it was Darian had to kill the minute they mentioned it. It was so obvious there might as well have been neon orange flags around it. The fact that it took so long for them to reveal the identity in the book was annoying.

While I liked that the novel took the idea of a shadow assassin and showed how nasty the applications of that can be, I really could not get behind Darian. Her backstory was so cliche and she followed the path of many an urban fantasy heroine and started developing unique and random superpowers no one has ever seen before when times got tough. The romantic subplot was poorly done in my opinion, and the plot lacked any twists at all. I don’t regret reading the book but it does remind me of why the urban fantasy genre frustrates me so much. C-