After enjoying Running Wild, your collaboration with Linda Winstead Jones, I felt perhaps you had gotten your writing mojo back.  While Running Wild wasn’t the Howard writing of pre Open Season, it was still an improvement over the last several hardcovers.  In the year’s previous hardcover release, we were even treated to a bear’s point of view.  Shadow Woman was so plodding, however, I found myself longing for the bear. 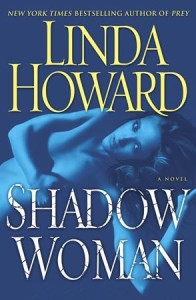 Lizette Henry wakes up one morning and does not recognize the woman she sees in the mirror.  She also realizes she can’t remember two years of her life.  This drives her to re-examine everything.  The change in her routine, however, triggers actions by people who have been watching her and tracking her for the past two years, including a mystery man identified as only Xavier.  Coincidentally, Lizette has dreams about a mystery man whom she designates as Mr. X.  Whenever Lizzy tries to grasp the threads of a memory, she is penalized with intense debilitating headaches but over a short period of time she is able to suppress the pain by singing those away.  Truly, she would hum a song or think a tune and the headache would recede.

Lizzy sets out to find out what happened to her but doing so places her life in danger.  We know that Mr. X is not the danger to Lizzy because we are given scenes from his point of view. Perhaps this would have worked better as a first person, rather than multiple points of view in the third person.

This slow moving suspense strains credulity. There are obvious plot holes (Lizzy discovers a tracker under the keypad, gets rid of her backpack, buys all new clothes, ditches her car; but conveniently keeps her wallet which allows Xavier to track her) and the attempts to keep the reader in the dark only add to the lack of momentum in the story.  There is little dialogue but pages of descriptive text.

The romance portion of the story was half-hearted and the characters were flat. Overall, a disappointing read for suspense and romance readers alike but the romance was my least favorite part of the story. In order to engage the romance reader, we were given dream scenes where Lizzy imagined her lover having sex with her throughout the book.  The dream sequences are to provide the basis for Lizzy and X to engage in road side sex immediately upon meeting again for the first time in years.  But to have Lizzie going from fear for her life that this man on a motorcycle is chasing her to fucking him is ridiculous and no amount of dream sex is ever going to provide sufficient justification for that whiplash emotional turnaround.

The opposing side is incompetent and provides little opposing force.  Felice, the person presenting the biggest danger to Lizzy, keeps returning to the same pool of men who fail to accomplish her tasks the first time around.  The only one who is on the ball is Xavier.  Why Xavier and Lizzy find themselves in this situation in the first place isn’t well justified at the end either.  The reveal raises more questions than it answers.

→ Jane
Previous article: Tuesday News: What are you looking forward to in the New Year?; Banished words; Favorite books
Next Post: REVIEW: The Christmas Carrolls by Barbara Metzger