I loved your debut YA fantasy novel, Seraphina, and even wondered if I’d been too stingy with my B+ grade. So when an ARC of the sequel, Shadow Scale, became available, I immediately requested it. 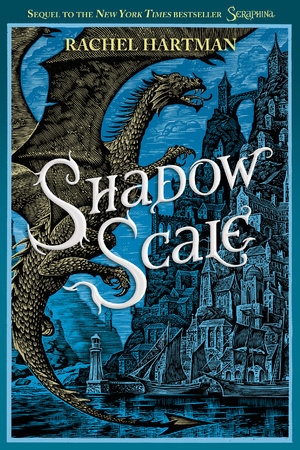 Shadow Scale begins where Seraphina left off. Before the prologue, there’s even a helpful “excerpt” from a Goreddian historian’s writing about the events of Seraphina, from a vantage point decades in the future, provided to bring new readers up to speed.

As Shadow Scale opens, Seraphina’s dragon uncle Orma is no longer in Goredd. He was injured at the end of the last book in a heroic act that revealed the depth of his love for his niece. Now he has gone abroad and must hide from the dragon censors or face memory and brain excision.

Meanwhile, Lucian and Seraphina are still in love, but Lucian is still engaged to his cousin Glisselda. Since Glisselda is the new queen and only recently lost her mother, while her grandmother lies comatose, Lucian and Seraphina both feel it wouldn’t be right for him to end his engagement. Instead, they have resolved to stay away from each other, as difficult as it may prove.

Abdo, Seraphina’s twelve year old half-dragon friend, explains to Seraphina that all the other half-dragons have “mind fire” which he can see, but she does not. It appears Seraphina has sealed up her mind.

Seraphina learns that the half dragons’ minds can join together to form a net that would protect the city from any dragon attack. Such a weapon would be very useful in the coming war with the dragon rebels, but more half-dragons need to be recruited to make it work.

So Seraphina and Abdo depart on a journey that will bring them face to face with all the denizens of Seraphina’s mind “garden.” Most of these are caring, vulnerable people, but there is one, Jannoula, who terrifies Seraphina because she once succeeded in taking over her mind.

On the journey through Goredd and Ninys, Abdo and Seraphina find two half-dragons who join them, Nedouard, a talented doctor with a dragon-like beak, and Blanche, who uses her powers to design automatons. But things begin to go awry when Seraphina tries to recruit a half-dragon painter, Od Fredericka, and the group is attacked by another, giant half-dragon, Gianni Patto.

Seraphina realized that Gianni is possessed by Jannoula in much the way she herself once was. And when Jannoula manipulates Od Fredericka into joining the group, and Abdo’s hand is injured, it becomes clearer than ever that Jannoula is up to no good.

Things go from bad to worse when Abdo tries to stop Jannoula from possessing others. Instead, she invades his mind, and he has to spend much of the novel fighting her off.

In Samsam, Seraphina and Abdo meet Jannoula in person and see that she has helped a terrible man rise to power and convinced him and others that she is a saint. Samsam now plans to invade Goredd, and Jannoula confiscates Seraphina’s thnik, the only communication device with which Seraphina could have warned Lucian and Glisselda in time.

Can Seraphina find a way to defeat Jannoula and save Goredd from the latter’s machinations? Does the answer lie in an ancient text Orma has written to Seraphina that he has been reading, which makes what appears to be an outrageous claim, or is that a red herring?

Can Seraphina protect twelve year old Abdo, as she promised his grandfather she would do, or will Jannoula take him over completely? What about the other half-dragons, both those Seraphina knows and those who await her in Porphyry?

Where has Orma gone? Are his memories still intact? And what about Prince Lucian’s engagement to Glisselda? Is there a way to resolve that conflict without breaking anyone’s heart?

I found Shadow Scale a very frustrating book. Part of the problem is that my favorite secondary characters in Seraphina were Orma and Lucian, and I wanted more of Seraphina’s relationship with these two than what we got in this book.

Here, Lucian seems like a different man, far less perceptive and more ineffectual than he was in book one. Seraphina’s relationship with him takes a backseat since the two characters spend most of Shadow Scale physically and geographically far apart.

At one point in the book, Lucian and Seraphina see each other for a brief period, but the romance no longer works. In the first book their relationship felt innocent yet romantic because for much of that novel Seraphina and Lucian’s feelings went unspoken. Now that those feelings have been articulated the characters feel guilty and consequently the relationship starts to feel illicit and even a little tawdry.

It also makes no sense whatsoever for Lucian to be in that location at that time, given what else is going on in the world, so the romantic relationship feels doubly shoehorned into a story it no longer fits.

As for Orma, I missed him even more. The scenes in which he is present (especially the last of these) are terrific, but he is rarely present in the book at all. It’s a shame because thus neither of these two relationships, both so lovely in Seraphina, are used to full advantage here. And as a reader, that was what I most wanted from this book.

So what do we get instead? Well, Abdo is on stage for a lot of the book, and I like him a lot too, but most of what he does here is suffer under Jannoula’s invasion of his mind and spirit. It’s depressing to see, especially since he is a twelve year old boy. Late in the end of the book, he undertakes a heroic effort, and I really liked that, but felt that it came too late.

Worst of all, as Jannoula takes over one after another of Seraphina’s half-dragons, Seraphina just flails. It’s Jannoula whose actions drive the story, not Seraphina, who oddly is a helpless observer of those actions, sidelined in her own book.

My husband, who read the book with me, pointed out that the first book felt like it was about Seraphina, but this second book really doesn’t, and I agree. Seraphina is so passive here that it’s hard to like and admire her, or even to want to read about her struggles, until quite late in the story. Even the worldbuilding, though still solid, is marred somewhat by Jannoula’s ability to manipulate or dominate just about everyone.

I liked the resolution to the romantic conflict because it was one that I read as an unconventional HEA, but I suspect some readers view it very differently.

Another thing that is still quite good is the prose. I liked your writing style in Seraphina and I still appreciate the way you can string a sentence together in Shadow Scale. For example take the first paragraph of Chapter One:

Queen Glisselda spotted the dragon first. It was a swift-moving patch of darker darkness against the night sky, obliterating stars and birthing them again.

Still, all the pretty writing in the world couldn’t counter the misery Jannoula inflicted. I liked at most the first 20%, and the last 10%, which is all that Jannoula didn’t dominate, though I was frustrated that there was never a payoff for a statement Orma made when he gifted Seraphina a mysterious object.

Had Shadow Scale been the middle book in a trilogy, I might have given it a higher grade. But this is the final chapter in Seraphina’s narrative, and I am disappointed that her story ends on a dissatisfying note. D/C-.