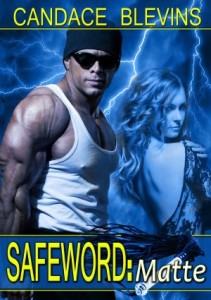 Sam is a divorce lawyer and a female mixed-martial-arts fighter. She kicks so much ass when she fights that she can kick the ass of most male fighters she knows, and certainly of most of the people she’s interested in dating. However, she’s also sexually submissive and a heavy masochist. But she needs her dominant to earn her submission by taking it from her in a fight. She’s tried dating fighters she spars with, but most of them aren’t kinky and can’t understand or fulfill her desire for pain with sex. She’s tried dating dominants who aren’t fighters, but most of them can’t beat her in a fight. So she’s kinda stuck.

One weekend, she watches a series of MMA cage fights and gets the serious hots for a heavyweight fighter, Ethan Levi. But because Ethan is probably going to fight her sparring partner by the end of the weekend, Sam turns him down flat when he hits on her at some point. Ethan and Tom do fight and it’s seriously hardcore:

They fought so fast the human eye couldn’t keep up – she couldn’t wait to analyze this on video later. At the two minute mark, both were bloody, and when the crowd started the countdown fifteen seconds before the five minute mark, they both flew at each other when the crowd hit three, and once again fought so fast it was impossible to tell who had the upper hand. Blood was flying by this time, but neither of them were slowing down one bit.

She’d seen Tom hit Ethan full force and he took it, which meant she could truly fight him, all out. This wasn’t going to be a spar, this was going to be a fight to a simulated rape, and he was going to unmercifully fuck her with his wicked cock if she lost. When she lost.

Ethan is a sadist, Sam is a masochist. The scenes are intense, but the negotiation beforehand, and even during the scenes, is realistic, focused, and extensive. Ethan’s during and aftercare of Sam is wonderful. As Sam thinks to herself at some point:

He was such a contradiction, such a caring person who went above and beyond the normal caretaker roll. But then his inner sadist took over, capable of doling out pain in measures she’d never been able to handle before, and somehow made her want even more. And more.

Two (and a half) problems.

Halfly: does his dick really have to be the Biggest Dick Evah?! Really? Like, his dick is actually part of his sadism because it’s so big it hurts. That just seems…a bit too much.

Second and biggest problem, OMG, your writing. ::sob:: The characters felt like puppets drawn on a lollipop stick, moved back and forth by a precocious six year old (well, maybe not, considering the sex they have). Except…not quite. The characters have *character*, they have motivation, they have needs and wants and desires. Except eveything is utterly wooden. There’s no sparkle in the dialogue. There’s no heat in the sex. There’s no tension anywhere. There’s infodumping everywhere about stuff I don’t care about:

“What time do you start your days during the week?”

“I usually get to the shop around seven in the morning, which gives me some time to get organized before the men arrive.”

“What days do you work? People move on the weekends, right?”

“We have teams out seven days a week, but if I don’t want to work weekends then I don’t. I had planned to work yesterday, but the great thing about being the boss is you can pull other people in if you need to. I have someone I knew wanted the extra hours, so I didn’t feel guilty about calling him in. What hours do you usually work during the week?”

“It kind of depends. On days I have court sometimes I meet the client at the office at eight and we talk about the expectations for the day and then walk to court together. Sometimes I just meet them at the courthouse at nine. I see people later in the day on Monday and Wednesday, and try to end things earlier on Tuesday and Thursday so I can get something light to eat before going to the dojo. I try to keep Friday evenings free so I can leave early, but I sometimes schedule mediation sessions during that time if I sense people are close to agreeing. Sometimes waiting too long means they talk themselves out of seeing things eye to eye.”

And then skimming of stuff that would add to the story:

Ethan grilled steaks and vegetables while they talked, and pulled out a fantastic bottle of red wine to go with them. He made a raspberry dish with drizzles of chocolate over it for desert, and hand fed it to her, letting her lick his fingers clean between bites. She helped him clean the kitchen, with the conversation going all over the place – their most embarrassing moment in high school, the details of their first kiss, how they lost their virginity, how strict their parents were, what made them start taking martial arts, how they discovered the world of kink. When dinner was over, they moved out onto the screened in porch, which had an incredible view of the city below.

And there’s no follow-through. Ethan hits Sam ten times each with a wicked flogger, a steel cane, a rattan cane, and a tawse, all in one evening, hits her so hard she screams, orgasms, and almost passes out, all from the pain. And the next day they go jetskiing with no mention whatsoever of how her ass must feel, no playing with the marks, no admiring the bruises, no mention that she has to sit a bit funny. No…life to the story.

→ SarahF
Previous article: Master of the Universe versus Fifty Shades by E.L James Comparison
Next Post: REVIEW: Teach Me by Cassandra Dean