REVIEW: Rock Me by Cherrie Lynn

There are so many great things about your book that I feel kind of sad that my distaste for the heroine kind of ruined the story for me. Rock Me features a tattooed and pierced hero who lives an alternative lifestyle, one that is frowned upon by most of his family. Brian was a wild youth from an affluent family but settled down enough to build himself a future by opening a well known tattoo shop called Dermamania in Dallas, Texas. Candace Andrews is acquainted with Brian because he used to date her cousin, Michelle. 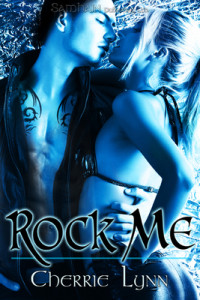 Candace is the “nice” girl. She lives a pampered, moneyed life and is currently in college. Her parents are society types and expect Candace to lead a certain type of life, one that does not involve dating guys who have tattoos and piercings all over their body. Candace decides on a small act of rebellion. She wants a tattoo and she wants Brian to be the one to administer it to her. She also decides she wants Brian. Or sometimes she wants Brian. Othertimes, like right after he fingers her in a truck at her insistence, she decides she doesn’t want him.

Let’s talk about Candace. Candace is presented as an immature girl who is on the brink of adulthood. Candace had been home schooled because her parents were so protective of her. Her friends were closely monitored by her parents and she is, at the ripe age of twenty-three, still in college studying to be a social worker. (This is frowned upon by her parents who had hoped she would be a school teacher).  Candace barely has the maturity to decide what to eat for breakfast let alone involve herself in a serious and long term committed relationship. I wish her character arc had been about moving from immaturity to adulthood but instead it was really about Candace trading her parents for Brian. And it’s not that Brian was a demanding, authoritative figure. Instead, it’s that Candace is simply too immature to make decisions for herself and she is never presented as someone who had autonomy of mind.

For most of the book, Candace hides her relationship with Brian, embarrassed to be seen with him. When she finally does throw off the shackles of her parents and their expectations, she does so with extreme immaturity, placing a family event in jeopardy. Maybe some will read this as the turning point of her life, finally exerting her independence. I just read it as supremely selfish and immature because she didn’t face up to the repercussions of her actions, but instead hid. In fact, I had read From the Mixed-Up Files of Mrs. Basil E. Frankweiler with my daughter a couple of weeks before reading Rock Me and I felt like the immaturity level of the 11 year old female protagonist and twenty three year old Candace was on par.

[spoiler]She is supposed to be a bridesmaid in a wedding but runs off the night before with Brian to a concert in Austen and refuses to answer her phone because she is afraid of what her parents will say and doesn’t want to ruin her time with Brian.  She skips the wedding entirely saying that someone else will fill in for her.[/spoiler]

The love me/go away emotional tug of war that Candace put Brian through, particularly when he had his own demons of acceptability to struggle with wasn’t a) fair or b) authentically carried out. In other words, if Brian really did struggle with acceptance, like Candace did, wouldn’t a woman who was constantly trying to hide their relationship have had a larger emotional impact on him? I found his endless patience and understanding to be writerly manipulation. Candace never once takes responsibility for her actions, for the hurt she had to have caused Brian, for the inconvenience to her family. I just wished the entire book she would grow up.

Brian’s family is mostly disapproving despite the fact he was a successful business owner. Even his brother Evan, who is supportive, never really acknowledges Brian’s achievements which I found odd. I guess I was supposed to believe that Brian’s family never saw past his misspent youth. His prosecutor brother, Evan, notes that Brian’s friends are always on the wrong side of the courtroom. But Brian had been a successful business owner and hadn’t had any legal problems so either his family wasn’t very close (and they were portrayed as having regular get togethers) or they were very myopic (some prosecutor Evan is). What I felt like was that Brian’s conflicts with his family was included to create a more active character arc for Brian, but it didn’t feel authentic because of Brian’s 10 years of sobriety and successful business ownership. What did feel authentic is that Brian still felt at odds with his family (rather than his family being at odds with him).

Brian’s commitment to Candace wasn’t something I understood.  His sentiments that he would never allow her to run away from him and that he would always be there for her were great and romantic.  But that didn’t fit Candace’s story arc.  She didn’t come from a family where she wasn’t supported or were she was rejected.

Toward the end, Candace tells Brian that she wants to save herself but those words ring hollow.  I was dissatisfied because I never felt like Candace had grown up or that she was deserving of Brian. As much as you tried to sell me on the idea that Candace had self actualized, I never bought it, which was too bad because I loved pierced, tattooed Brian and his alternative lifestyle; the sex scenes were great; and I enjoyed your voice. Too bad Candace was in the book. C-

According to my Amazon record, I paid $4.24 for this book. It’s probably around category length.