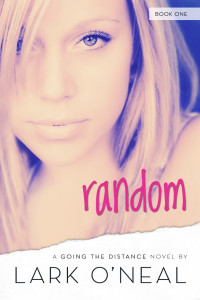 I’m not quite sure where to begin. This is a very odd book. I’m still dipping my toes into new adult so I’m not as well-versed in the genre as others, but Random struck me as a novel that fails to live up to expectations or even to the cover copy.

Jess Donovan is a poor waitress working at a local diner. Her mother died in a freak accident. Her step-father lives on disability and the birth father she barely remembers lives on the other side of the world.

Then one day a car crashes through the diner where she works, destroying it in the process. Now out of work, Jess has to find a way to make rent. She’s broke. But the accident also brought Tyler Smith into her life and everything begins to change.

I find it ironic the title of this book is Random because never has a title been more fitting for a novel. I guess that’s a sign it was a deliberate choice. But when it comes to a reading experience, I prefer a more cohesive narrative. Individually, the scenes are fine. But together? There’s barely anything holding the story together. We follow Jess’s life from one random moment to the next, hoping for the story to kick into gear. But it never gets off the ground.

I also just didn’t care for her love interest. Tyler is a rich boy who’s rebelling against his privileged family by majoring in art and working as a cook at a coffee shop. I personally can’t buy into that fantasy but I know the idea of an artsy person breaking free of family expectations is appealing so I’m willing to roll with it.

But it’s his interactions with Jess that really rubbed me the wrong way. As I said, Jess is poor. She lives paycheck to paycheck. Barely. Tyler obviously doesn’t. He has a trust fund. His parents pulled strings so he could go to a local college that he subsequently flunked out of. Privileged doesn’t even begin to cover it. But anytime Jess makes a reference to her background and history: starting to work at age 14 or not having a computer at home, let alone internet, Tyler gets upset. He tells her she has a chip on her shoulder and to stop making him feel bad about being rich. Sounds to me that the person with the problem isn’t Jess.

I know Cinderella narratives are a staple but this one really turned me off. Being poor is Jess’s reality. It’s not her fault he’s uncomfortable with seeing how the lower class lives. She can’t hide it to make Tyler feel better, which is exactly what he wants. I think she has a right to be a little suspicious about why this rich boy is taking an interest in her. To be honest, I spent the entirety of the book convinced Tyler was slumming it, as they say.

Another thing I thought the book was missing was intensity and angst. The heroine is 19 so I think there should have been more. Jess is portrayed as an old soul but even old souls have melodrama in their lives at that age. She certainly had enough fodder. Jess starts out the novel dating a guy from a rock band who she later breaks up with after an altercation. Major drama, right? Yet it’s not written like that, which only contributes to the oddball feeling of the novel.

To be honest, if anything, I’d say this book reminds me more of women’s fiction than new adult. It has a very even keel to the narrative rather than the dramatic ups and downs I’ve come to expect from NA. Bad things happen in the novel but I never get a sense of how they affect Jess or cost her anything. That’s the kind of lack I mean.

I can sort of see what Random is going for. Jess has drifted through life, letting things happen, rather than seizing control. The story is about her learning that. And while she finally begins taking steps in that direction towards the end of the novel, the book’s other flaws along with a clumsily executed cliffhanger just make it hard to appreciate. C-