I’m on an endless quest to find traditional fantasies featuring worldbuilding not based on Western culture. This desire is not without its pitfalls, of course. Sometimes it’s led me horribly awry. But I keep trying because I’m hopeful (and stubborn). My first exposure to your writing was through the Diverse Energies anthology. While your short story about a World War II that never ended didn’t impress me, I had hopes that your full-length debut drawing upon Korean culture and mythology would fare better. 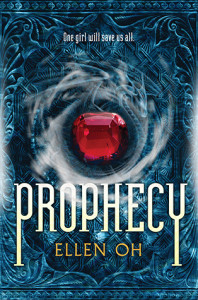 Golden-eyed Kira is the only woman in the King’s army. Able to see the demons that can possess humans, she is also charged with the task of dispatching them. This duty is made more difficult because the King insists upon keeping the looming demon threat a secret from the general populace. (Side note: Why do rulers always insist on keeping crucial life-threatening things secret?) The imposed ignorance only serves to ostracize Kira and make everyone think she’s cursed.

In addition to being the King’s demon slayer, Kira is also the bodyguard of the crown prince, her cousin Taejo. When their kingdom is attacked, she is forced to take the prince and escape. As one neighboring kingdom after another falls to the onslaught, it becomes increasingly apparent that demonic influences are at work. According to an ancient prophecy, Taejo may be the world’s only savior — and Kira is the only one who can protect him.

I had high hopes for Prophecy. I love women warriors and I especially love female bodyguards. Kira seemed like she’d be a protagonist right up my alley. But right from the beginning, we hit a speedbump. You see, Kira is what I call the Exceptional Girl. She’s the only female warrior. She dislikes girlish things. She doesn’t want to get married. This is all meant to be empowering, I’m sure.

It’s not. It’s a trap many supposedly girl-positive narratives fall prey to. Make the protagonist a girl who’s not like all those other girls. She wears pants, not dresses. She wields swords, not fans. She kills demons, nd doesn’t serve tea. But by setting the heroine apart in this way, by inadvertently pitting her against the other female characters in the narrative, the story reinforces the notion that you can only have one “type” of Strong Female Character and dismisses anything else.

In Prophecy, this is further supported when Kira is the only major female character among a cast of guys. We briefly meet her mother and aunt at the beginning of the story, and then later in brief glimpses throughout the book, but this is not the same as having an active role in affecting the plot. There’s no true reason for this oversight. Even if Kira were the only female warrior in what was constructed as a misogynistic world where that is frowned upon, that doesn’t mean there can’t be other women with roles to play in the story. From what I remember, the roles delegated to women were warrior, captive, and dead. That’s hardly empowering, considering the warrior role was assigned to only one female character.

That said, I did enjoy the worldbuilding and cultural details. It was very clear, and I caught nods to various aspects of Korean history: the references to Korea’s very conflicted past where it faced constant attack from outside forces and, of course, Nongae. My knowledge of the Korean language is minimal but I liked the inclusion of Korean honorifics. Given how often Japanese honorifics are used (and abused) in fiction, it was nice to see this convention followed on the Korean side of things.

The world presented, however, did not make up for the characterization. The execution was clunky and inconsistent at best. I think the fault rests with the writing, which was heavy on the telling and not enough with the showing. Normally, I dislike YA novels that focus almost too lovingly on the internal thought processes of their characters but I actually think Prophecy needed more of that to make me believe the characters’ decisions and actions. And since, for me, characters are what make a story worthwhile, I was left feeling distinctly unsatisfied when I finished the book.

Don’t get me wrong. Prophecy is fast read. The plot is serviceable and action-packed. But with the flawed characterization, it read somewhat unbalanced. Part of me wonders if this novel would have been better suited as a middle-grade novel rather than young adult. Despite some of the themes and violence, its structure and execution felt young in many ways.

I always think there’s more room for fantasy that doesn’t draw upon Western-based milieus. Especially if those novels do their research respectfully and don’t appropriate the sources they draw upon. And while I think Prophecy succeeds on that front, the other bits and pieces that make up a story — characterization, execution — fail to do it justice. C-