Around the time we were having the discussion of rape fantasies here at DA, Jane asked for recommendations of books similar to Cara McKenna’s Willing Victim, and your novella, Petals and Thorns, came up on Twitter. Reader MaryK, who hadn’t read it, thought it might fit the bill of what Jane was looking for, and author Megan Crane recommended it. Having enjoyed Willing Victim, I was curious and so I purchased Petals and Thorns. 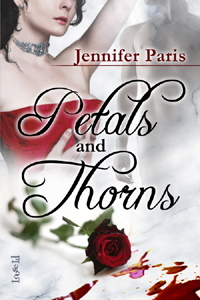 Two things are in Amarantha’s favor – the cowl-wearing Sir Beast cannot take her virginity without her consent, and he has promised not to harm her physically. The promise does not extend to other sexual acts though: Short of penetrating her with his penis, Sir Beast can do anything he wishes to Amarantha, and if she wants to win half his fortune, she has to comply.

On arriving at Sir Beast’s castle, Amarantha is stunned by the profusion of red roses that decorate it, and by the invisible servants who cater to her husband’s whims. Sir Beast requires Amarantha to strip for him, though she cries and pleads with him not to ask this of her. When he tells her that her resistance has won her a punishment to be administered later, she goes along with his wishes and displays herself for his viewing.

For dinner, Amarantha has no choice but to wear a gown that displays her breasts. Sir Beast feeds her with his gloved hands and a dreamy feeling overtakes Amarantha, only to be dispelled when Sir Beast asks her the following question: “Amarantha, my bride, will you beg me to collar you, chain you to my bed, and fuck you?” A horrified Amarantha refuses.

Sir Beast then administers the punishment he promised her for her earlier resistance to disrobing by chaining her hands and tormenting her breasts. Amarantha is unsettled by her own arousal, and then further disturbed to learn that under his gloves, Sir Beast has claws and golden fur.

But as the days progress, Amarantha finds herself anticipating her nightly encounters with Sir Beast more and more, developing a taste for his games and punishments. Sir Beast shows Amarantha tenderness after their sexual encounters, and Amarantha begins to understand that he feels trapped in his beast’s body, which he despises. Will Amarantha be able to forget Sir Beast when their brief marriage is over? Or will she betray her father and sisters by giving in to the temptation to answer his question with yes?

On the other hand, Amarantha does not leave. Presumably (though I would have liked more clarification of her motives), this is because she doesn’t want to disappoint her sisters and her father who have asked her to stay with Sir Beast for the entire week so that their family can acquire half Sir Beast’s fortune.

If I were to take this story completely seriously and apply our own era’s values to it, I would have to ask myself whether Amarantha (whose age I was unsure about but whom I pegged as eighteen or so based on her lack of life experience) is a rape victim or a teen prostitute. But is there really a big difference between the two?

As anyone familiar with the Beauty and the Beast fairy tale can guess, the power imbalance does shift to some degree toward the end of the story. But for me, it wasn’t enough because Amarantha and Sir Beast had never gotten to know each other outside their sexual activities, had never shared their pasts with one another in any kind of depth, and most importantly, because the trauma that encounters like their initial ones should have left Amarantha with wasn’t dealt with between them or even acknowledged as more than a source of titillation in the text.

I want to make it clear that I am speaking only for myself when I say that I feel deeply ambivalent when I read a story in this vein – one with a great power imbalance, nonconsensual sex acts, but no acknowledgement of lasting trauma or issues that need to be resolved between the protagonists.

As a teen in the 1980s, I cut my teeth on romances that fit the description in the above paragraph, and they worked for me. Why I found them sexy is a mystery to me, but I know that I did and that I was able to enjoy them without reservations in those days, when rape wasn’t very real to me.

But as an adult, I find it difficult to suspend disbelief in a happily ever after between two characters whose relationship begins with a sexual assault, unless the redemption and recovery process are a significant part of such a story.

I am aware that for some readers, no amount of redemption is sufficient, while for others, redemption isn’t necessary in what is simply a fantasy. I would no more judge readers who enjoy fantasies like this one than I would judge the readers who don’t enjoy them. I, however, fall somewhere in the middle between the two reader groups.

I think for me it boils down to an issue of reader consent. If this story had had a different ending, I might have been able to enjoy it with fewer reservations. But although I typically prefer books that end in a happy marriage or other romantic commitment between the characters, Petals and Thorns is one case where I would have preferred the story to end with the protagonists going their separate ways.