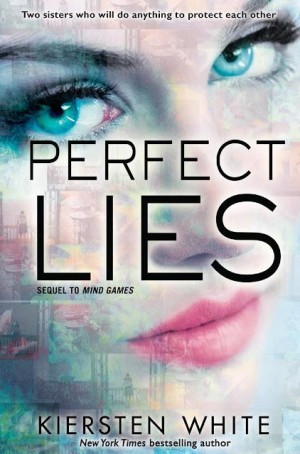 I still have yet to pick up your Paranormalcy trilogy, but I enjoyed Mind Games, a thriller about two sisters with special abilities who’d do anything for each other. That book ended with the sisters separated: psychic Annie free at last and violent Fia returning to the school to take it down from the inside. I couldn’t leave the sisters there so of course I was anxious for the second installment of this duology.

After the events of Mind Games, Annie escapes the Keane institute by faking her death and joins Lerner, a group determined to destroy Phillip Keane. All she cares about though is her baby sister, Fia. But as the days pass without word, Annie realizes the worst. Fia isn’t leaving Keane at all and if anything, seems to be embedding herself into the institution even further.

Fia’s happy that her older sister is free. When the two of them were still under Keane’s control, their well-being could be used against each other. Now that Annie is gone and presumably safe, nothing can be used against her. She’s free to do as she wants. And what she wants is to destroy Phillip Keane by any means necessary.

To that end, she’s teamed up with James, Phillip’s son. This makes things convenient because she’s also in love with him. A dangerous couple, indeed. But does James actually want to destroy his father? Or is he just playing Fia and counting on her feelings preventing her from seeing the truth?

As I said, I loved Mind Games. I loved the desperation and urgency laced through the narrative. It was very much a thriller and I enjoy reading that kind of pacing.

Perfect Lies lacked that same magic. While Fia’s stream-of-consciousness narrative worked in the previous book, it was actually the weaker of the two perspectives in this book for me. If anything, I found it incredibly annoying. It wasn’t the fact that she was starting to break under the pressure. I think the narrative did an excellent job of portraying her increasing mental instability.

No, what bothered me was that it wasn’t immediately obvious that Fia was actually doing anything. She was just following along with James, not thinking about the implications of their actions and relying solely on her perfect instincts. And I understand her instincts have never failed her but she really should have started questioning James’s motives earlier. Why couldn’t he tell her the plan? If he was afraid she was going to be read by a psychic, then what about him? It just doesn’t add up.

By contrast, I found Annie’s narrative to be interesting, which is a reversal of my experience with Mind Games. While her perspective isn’t as sharp as that of Fia’s from the previous book, I appreciate her proactiveness and desire to take charge of her life. Yes, that’s right. I was just plain happy a YA heroine showed a backbone and helped in smart, competent ways. (I realize this isn’t entirely complimentary about the YA genre’s current state.)

I can’t believe I’m about to say this, but I think Perfect Lies stretches too far. It aspires to too much. Mind Games was the story of two sisters who’d do anything for each other, to the point of one becoming an assassin and the other targeting an innocent boy to save her sister’s life. It shows how the sisters become that way and how they take charge of their lives.

Perfect Lies aims to tell the fall of a shady institute from two sides: the outside and the inside. And while I love character-driven stories, that is not enough to carry this kind of novel. This kind of book needs heavier plotting and that is what Perfect Lies lacked. When characters are constantly lying to each other and keeping secrets and there’s double-crossing, not to mention the skipping back and forth in time, the plot becomes the machinery driving the novel. It has to be strong. So if there are elements that are clumsily handled, it takes the whole thing down.

To be honest, I think your writing shines most when it tells the character-driven stories. When it switches to a more plot-dependent narrative, some rough spots appear. Maybe in the future a better balance will be struck.

As for the various romantic subplots, I liked Annie and Cole. While obvious, I thought that development was well-handled and the way that Annie asks Cole out on their first date is hilarious. On the other hand, I really disliked Fia and James. I didn’t like the idea of them in the first book and I liked it even less in this one. I get that James was meant to be a bad boy but I could only ever see him as a sketchy dude who made my skin crawl.

Having loved Mind Games, I anticipated reading Perfect Lies. Sad to say my expectations were not met. The majority of the plot was something of a mess. Even though I thought the ending was brilliant and wrapped up all the threads nicely, it wasn’t enough to make up for the first three quarters of the book. C-

→ Jia
Previous article: Does what you paid for a book affect how you’d rate it?
Next Post: Open Thread for Readers for March 2014