REVIEW: Pent Up by Damon Suede 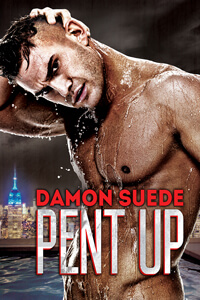 PENT UP: Mix business with pleasure and take cover.

Ruben Oso moves to Manhattan to start his life over as a low-rent bodyguard and stumbles into a gig in a swanky Park Avenue penthouse. What begins as executive protection turns personal working for a debonair zillionaire who makes Ruben question everything about himself.

Watching over financial hotshot Andy Bauer puts Ruben in an impossible position. He knows zero about shady trading and his cocky boss lives barricaded in a glass tower with wall-to-wall secrets and hot-and-cold-running paranoia. Can the danger be real? Is Andy for real?

What’s a bullet catcher to do? Ruben knows his emotions are out of control even as he races to untangle a high-priced conspiracy and his crazy feelings before somebody gets dead. If his suspicions are right, Andy will pay a price neither can afford, and Ruben may discover there’s no way to guard a heart.

Let me get something out of the way first: I did not want this book to be another “Hot Head”. Honestly, I did not. I really enjoyed your first offering, but it was not my favorite trope and it had more sex than I usually prefer in my books. I enjoyed it because of your writing, and when I picked this book up I just wanted to be swept away in the story.

First and foremost, since I had this conversation with several book buddies on Amazon board, I want to issue a warning. Ruben struggles with alcohol addiction – he is recovering, but his struggle is very much front and center during the whole book. If this is something which you find painful to read about, I strongly suggest you don’t buy this book.

As the blurb tells you, Ruben moves to Manhattan from Florida after his divorce to work for his brother Charles, who has an executive protection agency. Luckily for Ruben (or maybe not so luckily), when Andy Bauer comes to Charles to find himself a bodyguard, he decides he wants Ruben to take the job.

Ruben is eager to work, but he does not like Andy from the moment he sets eyes on the man and is hesitant to take the job. Andy insists he is in danger, but Charles does not really believe him. He thinks the job would be piece of cake for Ruben and very well paid at that. Ruben does not have much choice because he needs work very badly, so he agrees.

At first Ruben thinks that Andy is making up stuff, for reasons he cannot figure out, however he soon realizes that the danger is very real. Ruben also realizes that he is in over his head. To make a long story short, Ruben may be a good fighter, but he is not a very competent bodyguard. If you have read my reviews before, you know how I feel about romance characters who cannot do their jobs well, but still continue to do them while having passionate relationships with their bosses.

I have to give the story credit where it is due. Ruben knows that he is in over his head. He insists that Andy should hire somebody else (probably not from Charles’ agency since things turned out to be way too complicated) and he tells this to Andy several times. So, at the very least he is self–aware and the narrative does not pretend otherwise. Andy, however, insists that he needs Ruben and Ruben only. Granted, by this time they have given in to their mutual attraction, but it is clear that there is a second story-related reason why Andy wants Ruben and Ruben only. Eventually we get the explanation, and the explanation was not satisfactory for me, to put it mildly.

I started to wonder how this alleged genius thought his plan was going to work. I am still not sure how it was all supposed to work. I am also not sure how his plan at the end to avoid the consequences of his behavior was supposed to work for other people involved. SPOILERS. NOTE THERE IS A LOT OF THE STORYLINE UNDER THE CUT, BUT NO IDENTITY OF THE VILLAIN, I TRIED TO AVOID THAT.

Andy finally explains to Ruben that he does not want the cops or a more sophisticated protection agency involved because he is a bad guy. So far so good, but what kind of the bad guy is he? Well, apparently he is a financial hitman. Apparently he ruins people’s lives financially – now, wouldn’t you want to know how he does that? Me too! Alas, no such luck. Since he is an investor – that’s what he does – I am left thinking okay, he makes bad investments? But wouldn’t clients figure it out quickly if he invests in non-profitable ventures, because apparently dear Andy had been doing that for a while (but only to bad people who deserve it). Apparently he makes good investments too. There was a line at the end, when his assistant was piecing stuff together, which led me to believe that he was also investing his own money in the non-profitable ventures, but since he was so rich he could afford to do so and remain beyond suspicion. Eh, but he had been doing that for a long time, could he afford to lose money so often? Frankly it felt like the author could not bother to research the financial storyline in detail and left it deliberately vague and confusing.

However, all this is not the main reason why I consider the suspense storyline a fail. Apparently Andy figured out who was after him and his initial reasoning in hiring a not very competent bodyguard was to allow his attackers to hurt the guy a little bit and then let him (Andy) be. I am still trying to figure this part out and failing to do so. Why did he think they would leave him alone after roughing up the bodyguard, I have no idea.

Hopefully I was able to explain why suspense part of the story made no sense to me. I hope I am not generalizing when I am going to venture a guess that at least some readers will be mostly interested in the love story. Well, I can confirm that the sex was very hot, scorching hot in fact. I also liked that the first half of the story was mostly building sexual tension, but don’t worry, the second part has plenty of sex scenes. The story is GFY, which I am not very fond of in the first place; however this bothered me least of all in this book. Andy had had some sex with guys in the past and more than once, so in my mind I firmly placed him as bisexual and Ruben, well I get that he was written as GFY, but I do not remember the narrative coming out and saying that he did not like women anymore, so whatever the authorial intent was, I decided he was bisexual as well.

If you are going to get this book strictly for the love story and the sex, I think you will like it more than I did. Neither Andy nor Ruben was very likeable, in fact they were both struggling with addiction, but for me “not likeable” does not automatically mean I will dislike the story. I sympathized with Ruben’s struggle with alcoholism, and I think the attempt to make a parallel that Andy was also addicted to what he was doing and found it hard to quit did not work all that well, but I kind of appreciated that the narrative made the parallel in the first place.