REVIEW: One Tiny Lie by K. A. Tucker

What happened? I confess that while I was reading this book I was convinced it wasn’t written by the same author who wrote Ten Tiny Breaths and had I not read TTB, I don’t know that I would have finished this one. I will say (and this is the reason for the C- grade) that despite all the problems I had with this story, I was compelled to find out what happened, how it was resolved, what were everyone’s excuses/reasons/justifications. I wasn’t satisfied with what I read in the end, but at least it kept my attention. 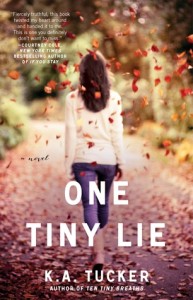 Livie is entering her first year at Princeton and she’s being challenged by her sister’s psychotherapist, Dr. Stayner, to do things out of the ordinary. Ever since her parents’ deaths, Livie has been living the life that she believed that her parents wanted her to live. As the blurb says, “‘Make me proud,’ he had said. She promised she would…and she’s done her best over the past seven years with every choice, with every word, with every action.”

No one with a degree in psychology should read this book because Stayner’s actions are not just unconventional but would likely lead to a lot of malpractice suits and probably license suspension.

“Make sure to have a shot of tequila. Break dance. Whatever it is you youngsters do nowadays during frosh week. It’ll be good for you.”

“I suggested tequila, Livie. Not crystal meth . . . And no, I’m not recommending tequila because you are only eighteen and I am a doctor. That would be highly unprofessional. I’m recommending that you go and have fun!”

I had a problem with Livie being characterized as somehow *off* because she was shy, didn’t have a boyfriend, and was focused on getting a degree and going to study medicine after. Somehow boys, parties, and acting crazy were Dr. Stayner’s prescriptions for creating a healthy life for Livie.  And how Dr. Stayner describes Livie isn’t how she appears in the book.  Stayner says that she’s super sensitive “You are one of the kindest souls I’ve ever met, Livie. You respond to human heartache so acutely. It’s like you absorb others’ pain.”

Yet, Livie’s actions are of the most selfish and unkind that you’ll read. Livie has a drunken night she can’t remember which results in waking up with a naked man in her roommate’s bed, a tattoo, and a host of interactions she’ll be reminded of later. This one drunken night (which we only see parts of ) results in the manwhore Ashton falling for her. We don’t know why he falls for her, only that after this one event she becomes his “forever” girl and he reminds her of this through cryptic notes and even more confusing actions such as sleeping with other women.

Because Ashton tells Livie that he a) has a serious girlfriend and b) that he’s a manwhore, Livie starts dating Ashton’s sweet and sexy roommate, Connor. Every time they are out together, however, Livie is eating Ashton up with her eyes, having intimate encounters with him, and basically wanting Ashton more than she’s ever wanted Connor. Part of Livie’s therapy, apparently, is to act like an utter asshole because she continues to date Connor even though she has only tepid feelings toward him.

The story is told only from Livie’s point of view, but we eventually learn why Ashton cheats on his perfectly nice girlfriend and how Dr. Stayner steps in to solve everything.  I struggled to be sympathetic with Livie.  It’s not that I wanted or needed Livie to be perfect but I would have liked a) a believable romance and b) some acknowledgment of how awful her actions were.  C-