REVIEW: On His Honor by Jean Brashears

This book really didn’t work for me. For one thing I felt like the tone and content of the story was quite dated. I’ve often lamented how many Harlequin Superromances lack sexual tension and this is emblematic of the issue.  I never felt like these two had any attraction for each other that was organic to their characters. Sure, we were told that they were attracted to each other, but the tone, attitudes and construction made it seem like they were more suited to being friends, at best. 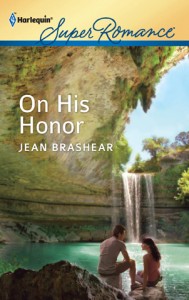 Also problematic for me was that the heroine conjured up images of Sandra Bullock and I just could not divorce the image of Bullock from the story itself. The heroine is Violet James, a famous actress known as America’s Sweetheart, who has just suffered a terrible public humiliation after an Oscar nomination when it comes out that her beloved husband had been cheating on her before and during their short marriage.  I couldn’t help but think I was reading real person fiction about Sandra Bullock who was smacked with the infidelity of Jesse James after she won the Oscar.   Violet flees to Austin, Texas.  Bullock also has a home in Austin, Texas. Bullock is also America’s Sweetheart.  So regardless of whether you meant of the story to refer to Bullock, I couldn’t help but mentally replace Violet with Sandra.

Urged by Avery, one of her closest friends, to come to Austin to lick her wounds, Violet takes up residence in the posh hotel, Hotel Serenity.  She even gets the entire boutique “hotel” to herself.  Her closest friend is a failed actor, Avery Lofton.  He happens to be under investigation for engaging in sex trafficking.   This presents the perfect opportunity for Detective JD Cameron, a friend of a friend of a friend, to come and be her bodyguard while also trying to figure out what role she may play in the sex trafficking trade.

About as much time is spent with the family of MacAllisters that they were a character of their own in the story.  Zane McAllister was one of Violet’s co stars.  JD Cameron was a friend of the family. He ate dinner at their house and when he brings Violet to meet the family, it isn’t “his” family, it is the MacAllisters.  I got the impression that there were many stories featuring the  MacAllisters that I had not read.

JD couldn’t refute that. Vince was part of the Montalvo/MacAllister clan by marriage if not by blood, and it was rife with happy couples. Somehow JD had been adopted by them when Jesse Montalvo had been his supervisor at VICTAF. He had attended many a family gathering since then, seeing for himself what a good marriage could do to smooth out life’s rough edges. Vince’s was one of them.

Every scene we see of the MacAllisters is full of happiness and fecundity and not a little confusion in keeping everyone straight:

JD spoke up first. “A friend of ours owns it. It’s strictly aboveboard, and it’s too small for anyone to be using it as any sort of front. She keeps her finger on every aspect.”

“Sophie is family,” Vince said. “And the MacAllisters are all straight arrows.”

JD nodded. “His brother Cade and Sophie are a couple.”

“Jesse Montalvo,” Doc explained for the benefit of the newer task force members. “Former FBI. He and his wife Delilah were both on VICTAF. Delilah rotated out a few years ago. Jesse retired before that.”

And really, what is the point?  The MacAllisters provide nothing to the plot.  Those sections of the book have no impact on whether JD and Violet get together or whether JD catches the bad guys. It’s filler prequel bait.  In a 70,000+ word story, I was disappointed that so much of the word count was spent on making sure that we knew everyone in previous books were one big happy, productive family.  Tedious.  The villains were marginally more interesting which is always a bad sign in a book.

Also tedious was the characterization of Violet as this amazingly sensitive person who is ashamed that she is on her second divorce because no one in her family has ever divorced.  She proclaims that she will never go under the knife because that would be wrong and against everything she has been raised to believe.  She also doesn’t like the Hollywood “pretty boys” and takes to JD’s Texas masculinity like an actress to botox. It’s not that I didn’t believe that Violet, an actress could be worn down by the constant scrutiny, that being cheated on wouldn’t shake one’s confidence, or that she could be sweet and natural and wonderful.  But the way in which Violet was written was as if she was a tender innocent, ravaged by a cruel world, and sustained no benefit from it.  Enter the white knight in the form of JD Campbell whose anti Hollywood attitude, but striking good looks, will provide the perfect antidote.  JD is portrayed as this lusty romeo whose mere presence makes the panties drop but toward Violet, he is nothing but a perfect gentleman.

“I’m not doing a very good job of this,” she said. “Okay, let’s start over. Has anyone ever broken your heart, JD?”

He tried to remember.

“Never mind.” She laughed. “I forget who I’m talking to, Romeo.”

There such a gee, shucks, attitude that I felt it would be have been better suited for Mayberry than Austin.  Part of what may have been a problem was selling the reader on the idea of a famous woman being in love with an ordinary man. That’s a great trope but obviously difficult.  I would have found the story more believable had we just been shown how this ordinary man fulfilled this famous woman regardless of his fantastic looks, protective instincts and her shaky self confidence.

I had a hard time believing that JD was anything but a rebound guy and his insistence that he can’t live off her money was tiresome. A guy who isn’t strong enough to not feel threatened by Violet’s money is going to have a hard time being the husband of one of the most famous actresses of his time.  It may be that this storyline, the tone and content appeal to a different kind of reader. I found it humdrum.  C-