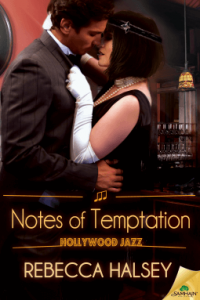 When Carrie Cooper leaves her small gold-mining town to seek her fortune, it’s not until she arrives in L.A. that she learns her college certificate is a fraud. The only work available is in a less-than-respectable speakeasy. The job comes with the opportunity to take the stage with Oz Dean, the club’s captivating bandleader. But rivals out for her blood along with her place in the spotlight lurk behind the curtain. Oz Dean has the rare ability to “see” music as brilliant colors, but nothing has ever dazzled him like Carrie’s pure, choirgirl voice. With a mob debt hanging over his head like a guillotine, he organizes a revue that will launch them all to stardom.

Unfortunately, his bold move attracts exactly the kind of criminal attention he’d like to avoid. Mired in Hollywood’s underbelly, caught off-guard by their growing attraction, Carrie and Oz are forced to consider the cost of success. Or their one chance to make beautiful music together could be their last. Warning: Romance with the flare of jazz and a touch of suspense. Wise guys, jealous dames, a wide-eyed ingénue, and fancy moves—and we’re not talking about the dance floor. May require a little morning-after hair of the dog.

I love me a good 1920s Jazz Age story so when Jane listed this in the New Releases post I first 1) wondered why I hadn’t noticed it before and then 2) quickly requested it. The book kicks off with a good opening chapter that sets the time and place. Carrie is fleeing a drying up mining town but also has stars in her eyes about moving to a big city. The big city of Los Angeles. At this time, it’s still much smaller than now with orange groves nearby. Several well known streets get named dropped and we see the LAPD in the early stages of corruption and bribery. OK, so some things haven’t changed much.

Oz has synesthesia! I’m fascinated by this condition and it was another reason for me to want to read the book. His manifestation of the crossed stimuli responses involves seeing music in color. His piano player’s notes are vivid red while Carrie’s pure voice is a vibrant and deep blue. Though few know of Oz’s “skill,” he uses it as a guide to help him determine a musician’s ability.

The story is filled with neat “turns-of-phrase” descriptions of the West Edge – the nightclub that centers so much of the action – and the people in it.

“On the elbows of their partners, women filed into the dining room wearing the finest material, cut to dramatize their figures. Candlelight softened the impossible whiteness of their arms and caressed the tilts and turns of their beautiful faces as they greeted each other. Draped in florets, they surpassed the festive theme of their surroundings and compensated for the uniformity of their men, mere accessories to be tugged along like pocketbooks the size and shape of suits.”

“Through the glittering buzz of intoxicated excess, Carrie watched Oz sway. The back and forth of his lean body mesmerized her. Every muscle move was a reflex to the music.”

It’s all dazzling to small town Carrie who had never worn a store made dress before leaving home. The nightclub action isn’t the only thing going on. Carrie wants to make a success of a career as a working woman and so hunts for jobs and a typewriter while the growing menace of a debt is being held over Oz’s head.

But halfway along, everything begins to sort of meander around. More characters and mysteries get added which leads to more meandering and it’s like my interest suddenly started to wane. It was hard to stay focused on what was happened or why I should care about a lot of it. Then the end seemed to be in sight … or was it? Nope, more twists and turns occur before a finale in which Carrie isn’t quite tied to the railroad tracks, as in a silent picture, yet still must escape death in the desert from some Johnnie-come-lately villains. I’m still not sure where all that came from.

Anyway, there are parts of the book I really enjoyed – the descriptions and “feel” of the era. I liked that Oz’s synesthesia is used a bit more than in other books where I’ve seen the condition tacked on. But the story lost steam halfway through and never regained it. B to begin with and C- for the end.