When you offered DA the chance to review some of your books, I got all excited. After all, I adore mid 18th century Georgian era set novels and that seems to be your specialty. Since I try to read series books in order, I decided to try “Noble Satyr” first. It also attracted me because based on the excerpt provided at your website, it looked like a book in which I’d get the down and dirty edition of life at Versailles plus a truly unsavory villain. But while it started off differently from lots of historical romances I’ve read, ultimately it failed to maintain that freshness. 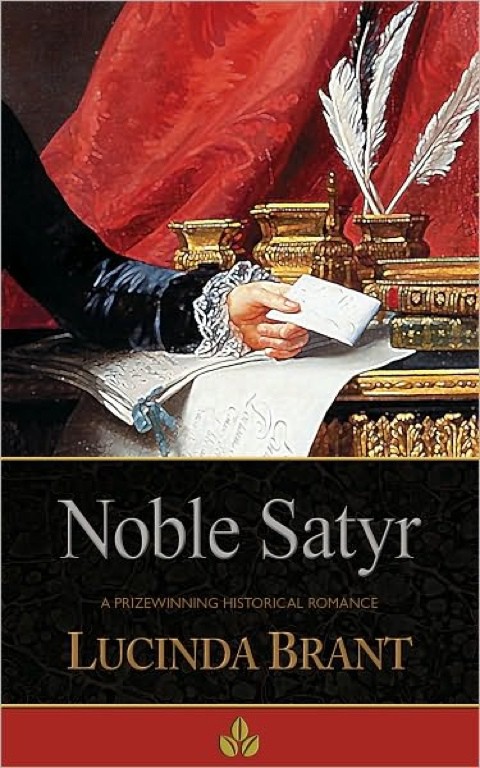 “Paris and London 1745. Abandoned at Versailles by her dying grandfather, Antonia is pursued by the lascivious Comte de Salvan who plans to wed her to his drug-addicted son then make Antonia his mistress. When the libertine Duke of Roxton snatches Antonia from Salvan's clutches, she believes herself rescued. But has Antonia merely swapped one seducer for another?”

Antonia is initially presented as a young woman who’s been hauled around Europe and lived at the Court of Versailles where glitter gilds the surface but darkness lurks just beneath. In an age when females were married at 15 and she’d seen what she’d seen, I expected a bit more from her. Though she appears to have a plan for her future, and does put it into effect, all too quickly she starts this breathless little girl thing where she stutters and stammers in the presence of the Duke, acts totally flustered and comes off as too naive. I guess this is supposed to signify how lacking in experience she is compared to the rakehell Duke yet I couldn’t shake the disappointment of watching her lose what sophistication you’d given her to begin with. She also never seemed to grow as a character. At the end of the book, though she’s now a married lady and has gone through some harrowing experiences, she still acts very much as she did at the start of the book.

The Duke of Roxton also intrigued me when the story began. He honestly seemed to a true rake. Women want him and men want to be him. He’s got this “I’m a Duke in an age when this means something and I’ll act like it” mentality. He’s dictatorial, he’s autocratic and if something doesn’t interest him – screw it. He’s got power and presence and isn’t above the snub or put down. At first, he couldn’t care less about Antonia’s problems and I found it refreshing that such a man isn’t instantly transformed by the power of lurve. It takes him a while and when he does fall, I feel as if I’ve seen his change of heart and believe it.

But while I like the character of the Duke, the age dynamic between Roxton and Antonia veered further and further off as the story progressed. She’s a young 17 and he’s – what? closer to 40? And while sometimes this type of disparity in age doesn’t bother me, here it did. After Antonia comes to Paris to live with Roxton and his sister, he and his friend Vallentine seem to treat her as a pet – indulgently laughing at her outrageous statements and actions. She also often sits on cushions and footstools at Roxton’s feet and they call her minx and chit. All this kept hammering home how young she is compared to them and frankly, by the end, it icked me.

The plot also sputtered out for me. The book starts promisingly with a truly horrifying fate in store for Antonia if she doesn’t act quickly. She does and initially avoids it. Then when she gets to England, here’s another surprising twist in that her self absorbed grandmother hates her and is willing to let the villain get Antonia in his clutches again. But along the way comes the “one night for true love” – okay six nights but the basic premise is the same as I’ve read before. Then there’s the Big Mis, which I saw coming a mile off, until Roxton and Antonia are reunited in love. But wait, there’s still more of the book left! So I guessed at what might happen to reach the end and wasn’t wrong. When a book starts off in a fresh way, I hate it when I end up predicting what’s coming.

Oh, and I know this is a minor issue but by the end of the book, I found it more and more annoying. Roxton has this verbal tick of adding ‘er’ in his sentences whenever he’s pausing to think or for effect. Had I made it a drinking game I would have been sloshed off my ass but as it was, I was beginning to mentally rewrite his dialogue which is never a good sign with me.

I know this is your first published novel and even though you’ve gone back and reworked it some, I think it shows. Had I read it years ago, I’m positive that my grade would have been higher but the dependence on some tired tropes and my uneasiness with the age difference between the hero and heroine cancel out my initial delight in what is fresh about it to me. I would like to try another of your books to determine if it’s just ‘first novel blues’ and to see if you’ve stretched as an author. But for this one, it’s a C-