In 2010, you released two enjoyable historical romances in your The House of  Rohan series (not to be confused with the Kings of Rohan). The two books, Reckless and Ruthless, featured classic Stuart heroes: gorgeous, sexy men with power and wealth who nefariously seduce spinster heroines whom they then fall deeply, irrevocably in love with. My favorite of the two Rohan books is Reckless whose hero, Adrian, is a sinfully magnetic rake. Now, in the mid 1800’s Adrian was not a common name for men. I am thus baffled you, in Never Kiss a Rake, named the hero of this novel Adrian too. The only answer I can come up with is that Never Kiss a Rake is a rehash of names, personalities, plot, and prose from your earlier books. If there’s an original thing in this book–other than the heroine having had small pox as a child–I missed it. 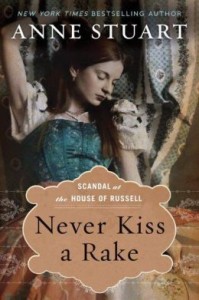 The heroine of this book, Bryony Russell, has been left penniless by her ostensibly feckless father. Bryony (like Elinor Harriman, the cranky heroine of Ruthless) is responsible for her sisters (one of whom is gorgeous just like Lydia in Ruthless). Bryony is convinced that her father, in the weeks before his death, was swindled then murdered by one of his investors. She leaves her sisters with their kindly elderly Nanny (there’s one of these in Ruthless too) and gets herself hired as the housekeeper in the house of one such investor, Adrian Bruton, Earl of Kilmartyn.

Adrian Bruton is a notorious womanizer with a faithless, evil wife whom he stays married to under the threat of blackmail. He’s a celebrious Cyprian who drinks far more than he should, is seemingly self-indulgent, and has few compunctions about going after what he wants. (Are there any guilt-stricken Stuart heroes?) Like Adrian the first, he’s gorgeous, tall, graceful, with a full mouth and bright eyes. From the moment he sees Bryony, he considers seducing her–like many a Stuart hero, her primness strikes him as wildly erotic. She’s calling herself Mrs. Greaves, but he’s sure there’s never been a Mr. Greaves and that she’s untouched. She’s prickly–her personality reminds me greatly of the heroine of Ruthless–and Adrian decides to mess with her just because he can.

Bryony moves in Adrian’s household and, despite being from the upper class, not only pulls off being a housekeeper but does a ridiculously good job at it as well. The servants–the ones she doesn’t fire–all come to love her and work to protect her from both Adrian’s dissolute charms and from the nastiness of Cecily, Lady Kilmartyn.

When Bryony is not scrubbing, polishing, cleaning, or supervising, she’s obsessing over Adrian.

Is he her father’s betrayer? Why does he put up with his witch of a wife? What would his lips feel like if she stole a kiss  from his beautiful mouth when he’s passed out drunk (answer: firm and with a hint of the “smoky flavor of the whiskey“)? Why did he use the world “orgasmic” to describe the way she eats and what does that word mean anyway? And what on earth would happen if she accidentally on-purpose wandered in to his bed one night and, horrors of horrors, he was in it? And he was naked?

“Are you going to rape me?”

“Of course not. I wouldn’t have to. I could have you eating out of my hand if I set my mind to it.”

She ground her teeth. “I am not a virgin, I am not puritanical, we are not going to have any kind of . . . carnal debauchery at all. Now let me up.”

He didn’t laugh at her this time. He fell back against the mattress with a weary sigh, still holding on to her wrist. “Now that’s the damnable problem, my angel. I’m all set to play the villain, have my disgusting, delicious way with you to both your pleasure and mine, and you say something completely adorable like ‘carnal debauchery.’ How is a man to react to something like that?”

“He’s supposed to release me.”

“I ought to,” he said. “If I had any scrap of decency left in me.” He turned his face, and she could see him in the shaft of moonlight, his skin white gold. It was then she realized he wasn’t wearing a shirt. Realized that he wasn’t wearing anything at all. “Fortunately,” he added, “any decency is long gone.” And he pulled her over on top of him.

“If you keep this up I’m going to get dizzy.” This time she managed a satisfactorily dry, cautious tone.

He put his lips to her ear, and she could feel his hot breath against her skin. “You already are dizzy, my dear Miss Greaves. Your heart is pounding, your pulses are racing, and your nipples are hard. I’m willing to bet my sweet little virgin is wet.”

“Between your legs. It’s a sign of arousal, your body readying itself for mine.”

Well, the sex isn’t disgusting but it’s prosaic. It’s possible I’ve read too many Anne Stuart novels but I feel sure I’ve read every sex scene in this book before. Adrian’s a god in bed who, even as he murmurs he shouldn’t, takes her virginity and teaches her the joys of one or two Latin terms. Bryony needs loads of reassurance her flaws (a slightly pockmarked side of her face and lack of familiarity with male anatomy) don’t make her unworthy of his ministrations. Even as she moans beneath him, she wonders if he’s a murderer. (I can think of at least eight Stuart heroines who’ve quivered and questioned in the same way.)

I like many of Anne Stuart’s novels. I like some of her books that are obviously derivative of other Stuart works. The entire Ice series shares many similarities none of which kept me from enjoying (most 0f) them. Never Kiss a Rake is, however, derivative and dull. The former characteristic highlights the latter. In the hands of a weaker writer, this book would have gotten a D from me. Ms. Stuart writes well, however, and her prose is smooth and assured. I’m going with a C-.