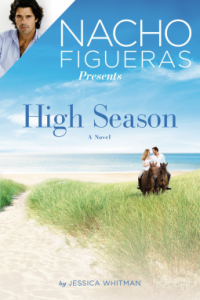 World-renowned polo player and global face of Ralph Lauren, Nacho Figueras dives into the world of scandal and seduction with a new fiction series set in the glamorous, treacherous world of high-stakes polo competition.

Georgia never wanted to be a jetsetter. A plain old country vet was fine for her. But one distress call from her best friend and the next thing she knows she’s neck deep in the world of polo’s most elite international players–complete with designer dresses, fine champagne and some of the most gorgeous thoroughbreds she’s ever seen. Some of the most gorgeous men too…

Alejandro Del Campo needs his team to win the season’s biggest polo tournament or else he’s not sure how much longer they’re going to be in business. What he doesn’t need is some sassy new vet telling him how to run his business–and distracting him at every turn. But as they come closer and closer to the championship match, it soon becomes clear that Alejandro wants to win Georgia just as much as the tourney trophy. But can he ever convince her his world is where she truly belongs?

I’m not sure how much ol’ Nacho had to do with the book but he certainly is nice to look at on the cover. When I saw this on offer at netgalley, I thought why not branch out a little and try something new – for me. Perhaps I’d learn a bit more about polo and see a female vet in action. It would have been a win if either of these had actually occurred.

It starts at a fast pace. There is enough information to set up the story and characters but the chapters are short and the plot zips along. The descriptions are well done, short and to the point, and I got great mental visuals of Georgia’s ragged but picturesque NY country farm in contrast to the hot, lush wealth of the Florida polo scene. Here is the 1% at play with their toys.

While Alejandro comes from blue blooded polo stock, Georgia is a mutt cross between her working class father and high society mother. He’s worth beaucoup but secretly likes low maintenance while she and her father struggle to keep the house intact. Her show jumping mother ran off when she was young and his parents’ marriage was an adulterous nightmare. But they do both have an amazing work ethic and live for horses.

Alejandro and Georgia are of course wildly attracted to each other, hormones and desire zinging all over the place but no! we can’t because “I’m employed by you” or “I won’t bang my way through the staff the way my father did.” There are opportunities galore for ogling and lustful daydreams though. Something always stops complete consummation and the sexual frustration mounts. Then comes 1/3 of the book as she and Alejandro dodge each other and their mutual attraction. As for the vet stuff, most of what we’re told about Georgia doing her work is just “she checked and rechecked their vet records” or “she checked them for injuries.” Boring at best. I’d guestimate that roughly half of the book separates the polo games.

This is a sleek, glossy world of money filled with elegant creatures everywhere – people and horses. Of course Georgia feels more at home with the scruffy mare bought as a companion for a new polo stallion Alejandro purchases. She is a fish out of water which is something subtly encouraged by a socialite making her move on Alejandro. Yet it is Georgia’s sweet, un-moneyed wholesomeness which is just what Alejandro has been looking for his whole life. Meanwhile Georgia, has all the answers to his problems with his daughter and his barn management and finally gets him off his ass about dealing with a drunken vet who has been allowed to stay in charge of his mega expensive string of polo ponies. What would he have done without Georgia?

The lingering issues from Georgia’s past are quickly raised and put in the rearview mirror as the equine miracle of birth finally brings Georgia and Alejandro together. But wait, one last hurdle appears which seems like it will separate these two forever and Georgia immediately reverts to her standard wallowing in low self esteem until Alejandro appears as a white knight in a horse trailer to announce his foolishness in letting her go. Cue required happy ending. Unfortunately I don’t really buy into it or that they’ve worked through all their problems. So for a polo Cinderella vet with surprisingly little actual polo playing or vet work, a C-