I’ll be honest — I was a rabid fan of the first three books in the Black Dagger Brotherhood series. In fact, I’ll still pull out Lover Eternal sometimes, because I enjoy Rhage and Mary’s story so much. But as the series turned more towards Urban Fantasy and became more epic in nature with multiple storylines, the emphasis on romance was left by the wayside. This made my interest in the series wane. That being said, Twitter has been, well, all a-Twitter about your first male/male entry in the series, featuring Qhuinn and Blaylock, so I was interested to see how you approached writing two heroes. 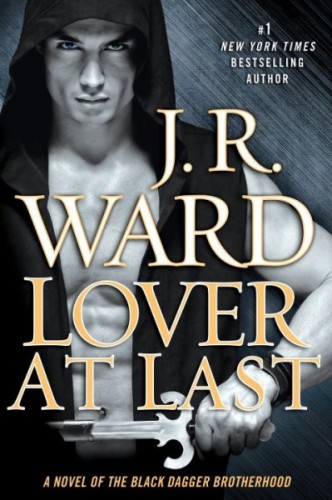 Along with John Matthew, Qhuinn and Blaylock have been best friends since before their transition. Blaylock has always known that he was gay and has always had feelings for Qhuinn. For his part, Qhuinn was busy whoring around, banging as many girls as he could, clueless about Blay’s feelings. Right up until they end up kissing in a previous installment of the series. Qhuinn’s reaction is negative in the extreme, and Blaylock takes the hint and moves on with his life, finding romance with Saxton, Qhuinn’s cousin. Of course, Qhuinn can’t stop thinking about the kiss and is now becoming convinced that Blaylock is the love of his life.

Blaylock is deeply hurt by Qhuinn’s rejection. This plays out mostly by Blaylock misinterpreting the motivation behind every single thing Qhuinn says or does. Blay gets mad about ridiculous things, storms off more than any Regency romance virgin, and is generally an ass to Qhuinn. For Qhuinn’s part, he wants Blaylock any way he can have him, even offering to allow Blaylock to have sex with him while Saxton is out of town. Qhuinn spends a lot of time begging Blaylock to “take it out on him” “touch me, please” and generally begging. As someone who is not invested in the story, I have to be honest, they acted a whole lot like middle school aged girls.

I read this book also because I was very curious about the sex scenes, and whether you would go *there*. I began my disenchantment in the series when V and Butch danced around going *there* and didn’t. So I wanted to see if you’d go all the way. You did. Mostly. I felt like the sex scenes, which are usually a strong point in your books were more abbreviated, and much less sensual than your normal fare. I thought that you’d have benefited from reading some M/M authors who write deeply emotional sex scenes that inform character and relationship development – particularly because this couple has been dancing around each other for so long.  The scenes to me seemed slightly perfunctory and I thought could have really been punched up emotionally.

The book also advances two other main storylines within the series, involving Xcor, who is  plotting to overthrow the Vampire King, Wrath, and pining for Layla, the Chosen. And Assail, who is a drug dealer, who was involved in the attempt on Wrath’s life in a previous book.

It’s hard for me to evaluate this book, as I found even at the end of it, I had no emotional investment in either Blaylock or Qhuinn or their happy ending. They spent literally 95% of the book going back and forth, miscommunicating and acting like children. Then they have one conversation in a bar, and next thing you know, they’re exchanging I love you’s and are together forever. For me, the romance was unsuccessful. But I’d imagine for your readers who have been absolutely frothing at the mouth to read Blaylock and Qhuinn’s story this book was very satisfying and offered them exactly what they were hoping for. And that’s really the point, isn’t it? For me, this is the end of my Black Dagger Brotherhood ride. Final grade: C-