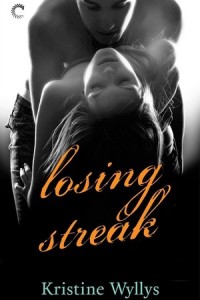 This is the second in The Lane series and really enjoyed the first one, Wild Ones. The second features Rosemary Young, the sister of the bartender who appears in Wild Ones. If you’ve read the first book, you know that Rosemary gets caught up with mob boss Joshua King, doing things for him even though she doesn’t want to.

Losing Streak opens chronologically some period of time before the Wild Ones. Rosemary’s mother is very sick and Rosemary is trying to find the money for medical bills. Brandon Williams comes into her life in a battered leather jacket and not much money in his wallet but in a short time becomes vital to her. He makes a living gambling and like many gamblers, he wins just enough times to make himself believe it’s a legit path forward. Unfortunately for both of them, his debts become onerous. He’s given a choice by his debtor, Joshua King, (although we aren’t completely privy to all the terms) and he’s shipped to Canada for nearly three years.

In the meantime, Rosemary is approached by Joshua King. Do things for him and he’ll take of her mother, he won’t prosecute her brother for stealing liquor from King’s bar, and Brandon gets to stay alive.  She acquiesces. At about the 40% mark, the story fast forwards thirty-three months.

One of my biggest problems in the book wasn’t just as Mandi noted in her review–the lack of interaction between Brandon and Rosemary–but the vagueness. Why did Joshua want Rosemary? He wants an “assistant” and coerces her into that position. And it’s not a secretarial position for Rose. Instead, she essentially becomes Joshua’s standard bearer in the lane but for all that she verbally blusters, we never see much follow through.

Rose describes what she began to do for Joshua “I was just an assistant, possibly the best-paid assistant in existence. I dropped off and picked up dry cleaning, scheduled deliveries to the bars, picked up the deposits in the mornings…Things started to bleed over…Minor stuff that really didn’t seem like that big of a deal. Have someone pick up the guest list for the next fight from the Tap Room. Drop off a package to Fury. Pick one up for Jeff. Take this call but don’t talk about it later.”

So why is she scary? Why does Joshua use Rose instead of something else? Why doesn’t Rose leave as time goes on? Why do Rose and Brandon maintain their love when it consists of a few furtive sexual meetings when he returns from Canada a few times a year?

There was a lot about Joshua–how he did both good and bad. He got rid of an abusive boyfriend, but demanded protection payments from all the businesses.  One woman said this “Joshua saved everyone I love in some way…But I would not lose even a little sleep if he dropped dead tomorrow.”

I guess the explanation would be that it took time for Rose to come to the breaking point and that it wasn’t until all was threatened or that she tired of being under King’s thumb that she found the courage to fight for herself. But I needed on the page justification because most of the time I was speculating about character motivations but didn’t see any text to support my suppositions. In the end I was just disappointed. C-