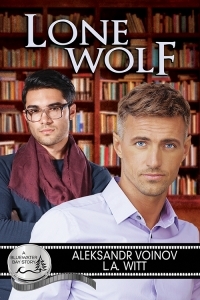 This is the sort of book I find very hard to grade, because although not in any way objectionable, it just didn’t do a lot for me. It came down to voice: the voice didn’t work, and so not much else did either.

As someone who spends a lot of time in an online reading community, I was instantly intrigued by the plot. Hunter, the author of a hugely popular paranormal thriller series, is suffering from bad writer’s block. When a friend from his “Wolf’s Landing” board sends him a fanfic, he realizes that it would be the perfect next book in his series, and arranges an in-person meeting. Hunter’s online affinity with “Lone Wolf” has been strong enough to make him disregard the usual rules about not reading unpublished works, and in person they discover their connection is just as strong. But Kevin’s introduction to the world of publishing and major fandom is seriously disorienting, and he starts to fear that Hunter really only wants him for his talent.

The relationship makes an interesting contrast with J.L. Merrow’s Raising the Rent, which I read at around the same time. Both are May-December m/m romances — “cradle robbing, old enough to be your father, twice your age, oh my God that’s creepy range,” worries Hunter — in which the older man is also far more powerful: rich, famous, a mentor, and with class privilege. (And in this case, Hunter is white and Kevin is brown.) But there’s much more balance in this relationship, because Kevin is self-supporting, assertive, and talented. It also helps that Hunter is aware of the potential of abuse in the author/fan relationship, and is very conscientious about helping Kevin and not exploiting him. Since this is a romance, there’s also an element of “oh, I know it’s wrong, but I just can’t resist you.”

He really liked the touch. Love it, in fact, And maybe Kevin being so pushy would help him get over the whole You’re taking advantage of a fan guilt-trip that was trying to kick off in his head. So maybe he was going to sleep with a fan. The fan in question was obviously onboard and in control. And it wasn’t like Hunter would make a habit of it, right?

So the relationship didn’t bug me — but I also didn’t get that invested in it. The prose stayed very much on the surface, and I rarely felt more than superficially in each character’s head, excepting Kevin’s dark moments at the end. The evolution of the relationship was told rather than shown, with most interactions being realistically prosaic but not that interesting to read about. Although the bountiful information given about publishing and fandom is certainly a step above info-dumping, the overall blahness left me feeling I was being told more about penguins than I wanted to know.

And though some complex issues for writers from marginalized groups are touched upon — Kevin being discouraged from using his real last name, Hussain; Hunter being told to make his characters “straighter” — this never delves much beyond “well, it sucks, but that’s just the way it is.”

I found one aspect of the conflict not quite believable. Hunter does make it clear to Kevin at the beginning of their relationship that he needs his space, but then does virtually nothing to follow that up; instead, he texts incessantly and spends as much time with Kevin as he possibly can. For Kevin to keep obsessing about Hunter’s loner tendencies didn’t make a lot of sense. Still, given Kevin’s state of discombobulation, this is pretty forgivable. I was also a little surprised by the emphasis on anal sex, with other sexual activities referred to as “foreplay.” I’m not a gay man — and I’m certainly not every gay man! — so I can hardly call this wrong, but the idea that anything that isn’t penetrative sex is foreplay seemed a little odd in an m/m story. I did appreciate the lack of set roles. Kevin and Hunter happily switch around in bed.

I can’t say this is a bad book, just not a very engaging one. C-