REVIEW: Letters for a Spy by Alice Chetwynd Ley 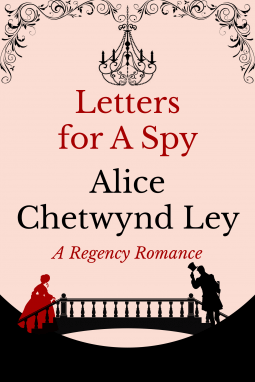 Elizabeth Thorne has finally seized the opportunity to assert her independence….

When she set out from crowded London to visit Crowle Manor, the Sussex house bequeathed to her by her uncle, Elizabeth could not be more delighted by the prospect of a quiet spell in the country. But on her way, she soon discovers that Crowle Manor may not be the quiet destination she had in mind…

Waking to discover a strange letter addressed to the manor house has been slipped into her guide book, she cannot help but wonder who put it there…and why? As her suspicions deepen, Elizabeth finds herself reacquainted with her former lover, Robert Farnham, a man that she had once refused to marry out of loyalty to her sister.

How is he mixed up in this bizarre affair? And how is it he now seems to hardly recognise her? As the mysteries surrounding her and Crowle Manor grow more and more intense, Elizabeth starts to realise her plans for a quiet country summer are unlikely to be fulfilled.

I was looking forward to this book with a slightly older heroine who finally realizes that the escape offered to her by her peripatetic uncle’s legacy to her is what she needs: a place of her own, to live on her own and not to become a spinster aunt or under the thumb of her (odious) sister-in-law.

Slightly odd things start from the very beginning. Oh, it’s easy to explain them away or brush them off at the moment but the observant reader knows immediately that everything is not as it seems.

As small things begin to snowball into bigger issues, Elizabeth and Margaret Ellis turn their logical minds to figuring out just what exactly is going on. One thing here or there could be reasoned away, or put down to fatigued memory, Elizabeth’s inventive writer’s imagination or coincidence but as the oddities increase – well, it just won’t do. There is something going on that has to do with Crowle Manor.

The two ladies approach it in an orderly, British fashion going from “most likely” to “outlandishl.” It’s like a Regency British mystery show. There’s the rude coach passenger, the oily peddler, the inn staff, Elizabeth’s house staff and finally the man with whom Elizabeth Has A Past. Robert Farnham might stare at her and – she’ll swear – follow her about town without speaking to her but she knows he’s the man she longed to marry and whom she turned down six lonely years ago.

But the Robert Farmham who confronts Elizabeth with her supposed illegal activities isn’t the man she knew then, the man she loved and regretfully declined. This is a cold, dark stranger who accuses her of heinous crimes – though the exact nature isn’t clear to her since she has no idea what he’s referring to. His sneering dismissal of her innocence is grating and sparks her own heated rebuttal of his claims of havey cavey activities which she is supposed to have committed. Brava for Elizabeth standing up to his bullying and her determination to see right done.

A lot of time is spent setting up the characters, the events that occur and the intricate details of the spy plot and ring. So a good bit of information gets conveyed to Robert through a long conversation between two of the spies verging into villain exposition. One thing it does do is enlighten Robert about the absolute innocence of the woman he still loves and to whom he’s going to need to abase himself.

Even though Elizabeth and Robert have History, this is really more of a spy/mystery than a romance. It has a second chance at love but there’s not much of it until the very end and Robert thinks terrible things of Elizabeth. Awful accusations. Later – when he’s alone – he does own to some slight doubts but it’s not until the villains spell it out that he knows he was wrong. Then he does apologize and praises Elizabeth’s logical mind to understand his reasons but still …. If I was a Vulcan, I could accept his cool logic but for a man who now swears he loves me to have totally bought in to me being a traitor would be hard to swallow. Elizabeth does briefly hold his feet to the fire over this but then quickly gives in to belief and faith in him.

With villains all over and one at the end who is tres annoying, complete with a sudden POV scene and exposition out of nowhere plus scenery chewing I am less than impressed with the whole of this one after what had been a reasonable start. C-