I was excited when I received the pitch for this book because I hadn’t read a medieval in quite a long time. The added element of mysticism intrigued me. The setting is supposed to be outside the Carpathian Mountains near Transylvania but while that is where the book is situated, the language of the characters seemed from all over. There were “ayes” and “lasses” and “politesse” and “Sweet Jesu” (the hero’s favorite exclamation). I couldn’t figure out if I was in Normandy or Romania. 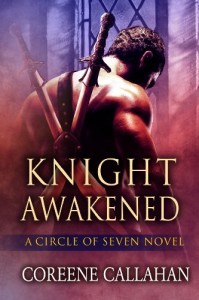 I deliberately tried to ignore this and delve into the story. It’s a mystical, paranormal, I tell myself, stop trying to ground it in reality. Taking my own advice, I move forward, only to be brought up abruptly by the insta lust connection the couple has. Afina Lazar is sought by Vladimir Barbu who must mate with her to seize control of Transylvania. He sends out Xavian Ramir, an assassin trained by Halal and the Order of the Al Pacii. Xavian finds her and kidnaps her. Instead of taking her to Vladimir, he decides to take Afina to his keep where he can install her as a healer.

The initial conflict is that Xavian demands truth from her in all things and is terribly upset when she lies to him. But she’s your captive, I yell at the fictional Xavian, what do you expect? And Afina, why are you so taken with this barbarian who has kidnapped you and your child, I say, shaking her a little to jostle some sense into her.

My admonitions must work on Xavian because he forgets his pursuit of truth and just starts wanting Afina at every inopportune moment possible.  His trewes are in constant need of adjusting even during moments such as when two are standing on a literal precipice trying to out-run those who seek to kill them.

Afina’s assumption of power is brought about by the taking of her virginity. It’s power she does not gain and cannot control without her male soul mate.  And Xavian glories that Afina is dependent upon him, like she is a trophy.  Wouldn’t it have been lovely had she owned power of her own, independent of a man?

The mysticism doesn’t really kick in until about 50% of the book and at first I am intrigued and then disappointed because I’ve read previous Callahan books and it’s kind of a redux.  There are some glimpses of interesting ideas such as the Al Pacii, the cradle of blood from which these assassins turned…warrior knights are birthed. But too little time is devoted to creating a complex political subplot which seems to be promised but is never delivered.

We also get emotional canon shots – intense passion, near death, deep vows, but none of the build up so it seems like we are missing important parts of the story. I get the message and intent, but I also want to travel the journey with the characters.  I read one of the early reviews suggested you put your brain in neutral and I guess that’s pretty good advice here.  C-