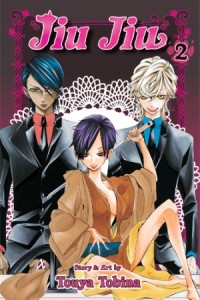 A few weeks ago, I read the first volume of Jiu Jiu, a shoujo manga series about Takamichi, the heir of a demon hunting family, and her two shapeshifting bodyguard-familiars, Night and Snow. Although the pacing was uneven, I liked Takamichi’s internal conflict and continue on to the second volume to see if the writing improved. Turns out: not so much.

Random is the adjective I’d used to describe volume 2. After the events of volume 1, Takamichi has thawed and started to form emotional attachments again. Night and Snow are thrilled at this development because they adore their mistress. Unfortunately, this leads to some complications.

First, Takamichi encounters a vampire prince who must drink the blood of a virgin in order to obtain his full power and heritage. Night and Snow are predictably horrified by this development but because the vampire initially takes the form of a little boy, Takamichi buys his fabricated story and wants to help him find his way home. But when he’s not in human form, the vampire takes the form of a pig. Yes. You read that correctly.

I like crack as much as the next person. I did use to read the Black Dagger Brotherhood once upon a time before I broke that habit, but some things just don’t work for me. Apparently, flying vampire pigs are one of them. Other readers may feel differently. Even as I write this, I’m fully aware other people eat this up in manga.

Secondly, Takamichi, her bodyguards, and her friends take a trip to the beach. But while there, they stay at a supposedly haunted house. Except the supernatural creature in residence is not a ghost. It’s a selkie. A lesbian selkie who forms an immediate attachment to Takamichi.

And while I loved the Takamichi of volume 1, I found myself less enamored with her in volume 2. I suppose I found her rapid turnaround in which anything cute and helpless merits her help, no matter that the circumstances may say otherwise. I can’t say I found it believable that someone who hunted monsters would buy a vampire’s story that he was lost and needed to find his way home. Surely she’s dealt with child monsters before? On the other hand, I found her brusque handling of the selkie to be more in-character.

I definitely see the vampire as trouble. He wants Takamichi and messes with Night and Snow to get her. I can’t say I’m keen on this sort of thing. It only reinforces the impression that Night and Snow are mentally children, no matter their physical appearance. I could be misreading the foreshadowing, but there are definite hints that Night and Snow’s feelings for Takamichi go beyond the familial and platonic, or will in the future. If anything, the developments in this volume made me more uncomfortable about any future romantic prospects for Takamichi.

At this point, I have no idea what this manga is aiming to be. There wasn’t enough meaty supernatural conflict to sustain an interesting external plot. The romantic aspects, such as they were, are clumsy at best and uncomfortable at worst. The comedic bits don’t work for me, but humor is tough to pull off since it’s so individual. I’m not sure I want to continue this series but other readers might feel differently. There’s potential buried under all the randomness. C-