I don’t read a lot of futuristics but I’m trying to be more adventurous in my reading so when this Carina Press book popped up on NetGalley, I requested it. It’s a no risk proposition to try out new books via NetGalley. Jaq’s Harp is a short story with six chapters. I’m not sure if this would have been better in a longer format, but I did feel like I was missing important parts of the story. It was also one in which I thought the sex kind of got in the way (or maybe because the story was so short that sex scene took up important word space that could have been devoted to some other development of the storyline). 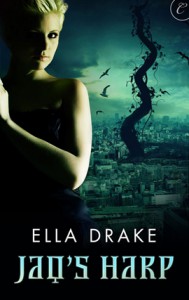 Jaq’s Harp is set in “a world of floating islands” where the wealthy live in clouds above the flatlanders. The owners of the corporations that inhabit the world above but pollute the world below have been the target of Mother organization which tries to inhibit and control the harm that trickles down. Jacqueline "Jaq" Robinson is an agent of Mother, part of GOoSE (Global Organization of Strategic Equity), taken off the streets at a young age to be trained. When her sister falls ill to a new disease created by Giant Corp., Jaq tosses away her next assignment and instead seeks out a way to infiltrate the clouds and obtain the antidote.

Another agent is working undercover at Giant Corp, an agent that Jaq had loved but who left her without warning one night. His name is Harp and is pretending to be a singer at Giant Corp while searching for evidence to bring down Giant Corp. and to recover anecdotes for diseases that Giant Corp is causing. Jaq can’t wait, though, because her sister is near death. Upon a visit to Monsieur Bovine, Jaq obtains a few magic beans that will create a way for her to climb to the clouds.

The riff off the Jack and the Beanstalk story was clever, but most of the story was told in a serious tone and failed to deliver on the sly humor that names like Monsieur Bovine; Harp, the singer; Giant Corp.; GOoSE; and the use of magic beans seemed to promise. There was a playfulness that I felt was intimated by the premise but never followed through on. Further, the reconciliation of Jaq and Harp didn’t fit well in the short confines of the story.

I was frustrated with Jaq’s impetuosity because I felt her “plan” to recover the antidote was really poorly thought out and that she never could have accomplished her mission on her own. This made me think less of her when I wanted her to be this really amazing super agent. In fact, the more that I read of the story, the more I realized what a poor idea Jaq’s plan truly was.

I almost think that this story would have worked better if Harp had been an agent that Jaq confronted for the first time and that they had feelings develop when Jaq tried to screw up Harp’s mission for her own purposes rather than a rekindling of a romance. The attempts to provide romantic tension took away from time that could have been spent fleshing out Jaq’s plan to save her sister instead of Jaq’s and Harp’s longing to get in each other’s pants. I also felt that having Harp’s point of view was almost unnecessary. Again, I chalk this up to the shortness of the story. In a compressed space, there was simply too much and, at the same time, not enough information provided to tie the competing story arcs together. C-