REVIEW: It Ain’t Me, Babe by Tillie Cole 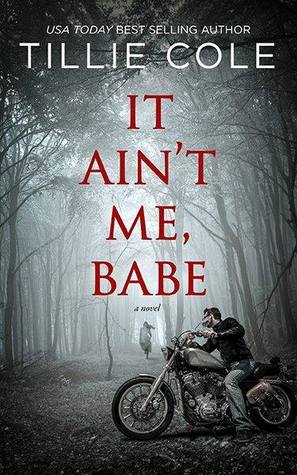 I bought your book because I’ve really enjoyed some MC-themed books. The problem for me is that with the success of a few authors, the market has been glutted by a lot of MC books that are really badly written, edited, and marketed. Yours falls somewhere in between. I remembered your name from Jane’s review of your book Sweet Home, which didn’t work for her. But I read a bit of the sample of It Ain’t Me, Babe, and found the book to be well edited and at least at the beginning, not as horrifyingly ridiculous as a lot of MC books that I read, so I bought it.

A meeting that should never have happened.

Many years ago, two children from completely different worlds forged a connection, a fateful connection, an unbreakable bond that would change their lives forever…

Salome knows only one way to live—under Prophet David’s rule. In the commune she calls home, Salome knows nothing of life beyond her strict faith, nor of life beyond the Fence—the fence that cages her, keeps her trapped in an endless cycle of misery. A life she believes she is destined to always lead, until a horrific event sets her free.

Fleeing the absolute safety of all she has ever known, Salome is thrust into the world outside, a frightening world full of uncertainty and sin; into the protective arms of a person she believed she would never see again.

River ‘Styx’ Nash knows one thing for certain in life—he was born and bred to wear a cut. Raised in a turbulent world of sex, Harleys, and drugs, Styx, unexpectedly has the heavy burden of the Hades Hangmen gavel thrust upon him, and all at the ripe old age of twenty-six—much to his rivals’ delight.

Haunted by a crushing speech impediment, Styx quickly learns to deal with his haters. Powerful fists, an iron jaw and the skillful use of his treasured German blade has earned him a fearsome reputation as a man not to be messed with in the shadowy world of outlaw MC’s. A reputation that successfully keeps most people far, far away.

Styx has one rule in life—never let anyone get too close. It’s a plan that he has stuck to for years, that is, until a young woman is found injured on his lot… a woman who looks uncannily familiar, a woman who clearly does not belong in his world, yet a woman he feels reluctant to let go…

Salome (or Mae, as we come to know her) has just escaped a secret compound where she’s been held as a sex slave/cult member since her birth. She is beautiful, with dark hair and crystal blue eyes that are routinely characterized as “wolf eyes”. She escapes after her birth sister is quite literally tortured and fucked to death. As she scoots out from under the perimeter fence, she’s badly bitten by one of the guard dogs. A kindly woman picks her up and offers to take her to the hospital, but Mae just wants to go to town. As the woman becomes a little inquisitive in the car, Mae asks to be dropped at a large brick compound outside of town. The woman protests, saying she doesn’t want to drop her there, it’s unsafe, but Mae insists.

Styx, the president of the Hades Hangmen, is known as the Hangmen’s Mute — a vicious killer and someone who took over the MC at a young age, when his father died. Styx uses ASL to communicate with most people, using his VP and best friend, Ky, to interpret. Although Styx is NOT mute or deaf, he’s uncomfortable speaking in public because of an acute stutter. Before he received his cut (was indoctrinated into the MC), he was known as River. At age 11, on a stop for his dad to conduct some club business, River runs off. He came upon a high barbed wire fence, and on the other side of it, a huddled, young girl rocking and crying to herself. He tentatively speaks, even though he’s stuttering. He tries to comfort her, and ends up awkwardly kissing her through the fence. Soon, she runs off and his father is hollering looking for him. The meeting never left his memory though, he pined for and looked for that girl again, but was never able to find the perimeter fence or compound again. Years later, his father is dead, he’s now the Prez of the MC, and he still can’t forget that girl.

Imagine his shock as he finds what he thinks is a dead body behind to dumpster outside the MC’s compound. But the dead body moves, and he and his brothers quickly realize that this dead body is in fact a badly injured young woman. They hustle her upstairs to doctor her up. They don’t need the Feds, who are already far too interested in what the Hangmen are doing, seeing anything suspicious leaving the compound. Once the young woman is cleaned and treated, Styx realized immediately that she is his wolf-eyed girl. He can’t believe it, he’d begun to believe she was a figment of his imagination. When she wakes, she is disoriented. He soon realizes that she’s been kept completely cut off from the rest of the world. She’s never seen a motorbike or vehicle. She’s never watched TV. She knows nothing at all. Styx understands that he needs to stay away from her. She’s pure and innocent and everything perfect and he’ll ruin her. He assigns the Club’s medic, Rider to take care of her.

As Mae heals, she comes out of her shell and adapts to her new surroundings quickly. She forms a close friendship with Rider, and yearns for Styx, who has been gone on “club business” for weeks. When he returns he’s more attracted than ever to Mae, and she feels the same. Soon they are embarking on a physical relationship, but Rider is also interested, and the Hangmen have many enemies who would take advantage of any weakness shown by their president. Plus, the cult that Mae ran from is looking for her.

Where to start with this book? I read it compulsively, almost unwillingly. It’s dark. Very, very dark. The atrocities done to Mae and her fellow sex slaves are awful. Their subjugation, including a detailed description of Mae’s deflowering at age 8 (which occurred on the day she met Styx at the fence) was among the most disturbing scenes I’ve ever read. The fact that these girls were tortured and raped repeatedly was never shied away from. That being said, Mae is about the most well adjusted cult survivor I’ve ever seen. She spends her entire life being told she’s a vessel for the men in her cult to “reach enlightenment” (while raping her) and is clothed only in white robes. But when she hits the MC, she’s just like a duck in water. She takes to skin tight clothes immediately, doesn’t mind the club whores, drinking, smoking, and serious violence that surrounds her. She’s never seen a TV or a motorbike before but neither holds any fear for her. I suppose that it’s possible that she could just bounce back from a lifetime of horrors, but you didn’t make it ring true for me. I figured she’d at least need some therapy or something. But I guess Styx’s magic wang saved her.

Speaking of horrors, at some point in the story, Styx realizes there is a mole among them. They decide who it is, and then torture and kill the guy. Another scene that was graphic in detail. Turns out, he wasn’t actually a mole (which he told them over and over and over again), which is probably why they got no information whatsoever from him. Doesn’t matter, now he’s dead. Then, once the real mole is discovered, the horror continues. I won’t say more about it, because it would ruin the story for readers.

Overall It Ain’t Me, Babe is a book that I read in the course of a few hours. It left me very unsettled and was not remotely a comfortable read. Alot of the story was hard for me to swallow, including a heroine who was a little too well-adjusted and sustained brutality towards women and innocents. While I don’t consider it to be as violent as Behold the Stars by Susan Fanetti, which Jane reviewed, I’d say this book has MAJOR trigger warnings for readers who are uncomfortable with the issues I’ve cited above. In the end, it’s a book that I read compulsively and don’t think I’d ever pick up again. But, your writing is very solid, and the editing is really good. For readers who enjoy a very dark MC book, it could work. For me, I don’t think I’ll be visiting the Hangmen again. Their world is just too violent for me. Final grade: C-.