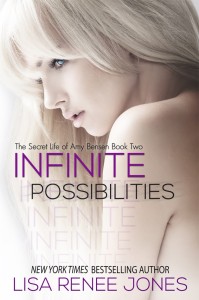 I read and reviewed the first book in this series, Escaping Reality. While I admired your writing in the first book, I was frustrated by the lack of understanding of why the heroine of the series, Amy Benson, is on the run. When I say this, I mean, I read the entire book and STILL didn’t know why she was on the run. Sadly, this book offers very little in the way of illumination, and suffers the same issues that I had with the first book.

Amy Benson is fleeing…something. Heck, Amy Benson isn’t even her real name. She’s been running for the last six years since her family home burned down and her entire family was killed in the fire. At the time, a mysterious, tattooed Handler offered her a new identity and a little bit of money, and set her up in New York. Amy developed a sense of comfort in New York, even getting a job at a museum (her father was a renowned archeologist) and making friends. But at the beginning of the last book, she’s told to run, and she does, no questions asked. On her flight from New York to Denver, she meets Liam Stone, architect, billionaire, recluse. And over the course of Escaping Reality, they fall in love.

But towards the end of Escaping Reality, she overhears a discussion Liam is having with his friend, Derek, and she thinks he means her harm. So she runs again. She catches a ride with a trucker couple and ends up in New Mexico working at diner (because, of course). Unsurprisingly, Liam, with his unlimited resources, tracks Amy down and drags her back to New York. Where he can “protect” her – although Liam’s protection seems an awful lot like bossing her around — extensively. He’s done a bit of digging into her past, and knows her real name, and a little about her family. Amy is at turns furious with Liam that he’s gone against her wishes and brought her back to New York, and so happy to have him there to comfort her. He does everything for her, and only wants her to never run from him. But Amy suffers from flashbacks to the death of her family, and each time, she seems to remember a little more. There is a mysterious man who her mother might or might not have been having an affair with; a boy that she was peripherally involved with who was killed for his knowledge of her mother’s affair; her beloved brother, Chad, who saved her life, and knew too much about whatever nefarious activities her father might have been involved in. Then, just as she’s feeling like maybe things are going to be OK, she’s approached by a woman, Liz, who she was acquainted with in Denver who tells her that her brother is alive and well and that he is in danger. Liz also tells Amy that Liam might be involved in the danger and that she cannot trust him. Amy flees with Liz (because, of course), and heads back to her hometown in Texas. Of course, Liam comes after her. But will Amy be able to trust him? Will she be able to find her brother, Chad? Will we as readers EVER really know what happened in Amy’s past?

Unfortunately, this book answered very few of the questions I had about the last book: Exactly what is Amy running from? Who is her mysterious Handler? What does the Handler’s tattoo have to do with anything?  What does Chad know? Why does someone mean Amy harm? And sure, the meandering, overloaded narrative is a problem. But more problematic for me is that this is a young woman who is deeply, deeply traumatized. She doesn’t think clearly, runs at the slightest hint of danger, trusts no one, and is incredibly emotionally unstable. As with the first novel, this makes her remarkably unreliable as a narrator, in my opinion. The story is told in the first person, and Amy is as unreliable as they get. Therefore, it made it very difficult for me to believe her perception of what is happening around her. I think that this will be an ongoing issue with the series, as long as Amy is the narrator. For the next installment, her brother, Chad is the narrator. Also a deeply traumatized individual. Not sure how that story will work either.

The writing itself is strong, and certainly the confines of Amy’s experience are vivid. Unfortunately, the issues I had with the first novel continue with the second, and I’m just not curious enough about what has happened to Amy to continue with the series, which is disappointing, because I really wanted to like this book better. In the end, I find that I am unable to recommend Infinite Possibilities due to an unreliable narrator and a meandering narrative that seems to be going nowhere. Final grade: C-