REVIEW: Hell on Wheels by J. A. Walker

I read this book second even though it is the first in the series and it’s probably a good thing I did as I liked the second story, In Ride’s Trouble, much more than this title. My main complaint with this story is my inability to buy in to the fantasy constructed. There is a motorcycle fabrication shop in Chicago that serves as a cover for a paramilitary organization. This is actually a great idea.  Grigg Morgan was a member of that organization yet never divulged this information to any one including his cherised little sister, Ali. After Grigg dies overseas on some mission, Ali is suffocated with grief over the loss of her brother, Grigg. Her father and mother are too busy comforting each other. She has no one but her brother’s best friend, Nate, left to turn to. 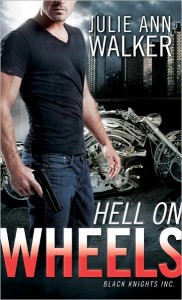 Nate and Grigg served in the military together. Nate and Ali have had feelings for each other since the first time Grigg brought Nate home. Grigg, seeing the gleam in Nate’s eyes as they lit upon Ali, whispered “You touch my baby sister and you die.” It was a mantra repeated by Grigg throughout the years and so Nate never acted on the attraction he felt toward Ali despite his feelings or the promising echo in her eyes.

Ali seeks Nate out for comfort and for security. She is concerned that someone is trying to harm her and it might just be related to Nate. She heads to Chicago to seek out Nate, labeled as Grigg’s “all time best friend” (I read that phrase and wondered if the characters were all in kindergarten) to find out the truth about Grigg’s death. She knows that motorcycle shop isn’t on the up and up but has never been inside, despite the years she visited Nate in Chicago.

From the beginning, I struggled with understanding why Ali would have even been allowed into the compound after her brother’s death when she wasn’t allowed in while he was alive. Further, I wondered why the compound didn’t have some type of separate quarters so that it wasn’t so completely obvious once inside that it was NOT merely a motorcycle fabrication shop particularly when there is the carcass of a Black Hawk helicopter in one of the bays. More obvious than even the Black Hawk helicopter is when some one (not Nate) starts going through each piece of her clothing, including all her unmentionables with a metal/bug detector.

The book suffers from first book in a series syndrome. Too many characters are introduced in hopes of catching the reader’s interest in the sequels (which isn’t going to happen if the first book isn’t rocking). The unrequited angst that is so fun in the second book languishes here. Nothing but heated and pained glances ricochet between the two for more than 50% of the book. Having read three of the books now, it’s frustrating to report all of them have the same exact emotional conflict which makes for stale reading, particularly if you are reading them in a row.

This book relies too much on physical humor to lighten the dark agnsting tone such as a cat getting stuck on top of someone’s head or a very quirky member of the team doing semi outrageous things.  Ali’s intelligence seems strained as well when she exhibits almost no thought about what it was that Grigg could have left her that might have secret information.  When the secret is revealed, it was so obvious that I was embarrassed for Ali.

As the plot moved forward, the emotional arc stagnated. I wanted someone to do something rather than ruminate in their heads how much they longed to be in each other’s arms. When they finally do get together, the build up was so long that the culmination is disappointing.  This is a great concept and the friends to lovers, unrequited lover theme worked for me in book 2.  Not so much for this one.  C-