REVIEW: Hate to Love You by Elise Alden 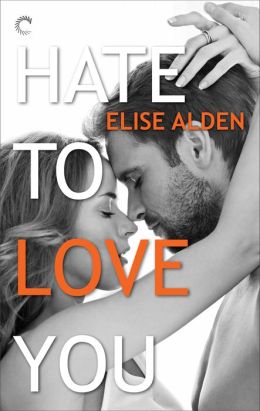 This is a story of oneupmanship or how to be the most horrible person in the world. It takes tried and true tropes of Harlequin Presents such as the secret baby, the big misunderstanding, and and the mistreated heroine and turns it up a few notches. Add in some infidelity and you have a “shocking” story. If you’ve spent a lot of time reading categories in the past, the storyline presented in Hate to Love You is plucked directly from those.

Paisley is a troubled young woman who was molested by her uncle. When she tried to report it, she was shunned by her family. Worse, her sister lies and says that Paisley wanted it. To punish her sister, Paisley decides to seduce her sister’s fiancé. After all, the two have an intense initial encounter and because Paisley can read minds (yes, that’s right, she has the power to hear people’s thoughts when looking into their eyes) she knows he wants her.

James is presented as a weak minded fellow. He wants to marry Caroline and is convinced she is the woman for him. He tries to avoid and resist Paisley but ultimately succumbs to her seductrix ways.

Basically the heroine rapes him. He’s drunk. He thinks he’s with Caroline. Caroline has wanted to wait until marriage and now, here she is, writhing on top of him. So he makes love to her but in the worst, most disgusting way. While drunk he admits that he wants Paisley and that he wants Caroline to pretend that Paisley is her and that he’ll fuck this fantasy out of his system.

Only it’s not a fantasy. It’s real. Paisley goads him on. Flip this around. It’s a woman who is drunk out of her mind. The guy comes to her, says he’s her boyfriend and proceeds to have sex with her. We all know what we’d call that.

Angie James pitched this book at the RT Bloggercon. Half the room was interested and the other half was ‘wat did I just hear?’ James said that while the book was controversial everyone was talking about it days later.

It’s not just controversial because of Paisley actions the night before the wedding. Oh no. The next day at the wedding, during the reception, Paisley lays out the bomb that she fucked the groom crazy the night before. Because she hates her sister. Really hates her. And herself.

Other than Paisley, the characters are really caricatures. The sister is an unrepentant sociopath. James is led by his dick. The people Paisley works with are also evil doers.

Fast forward seven years and Paisley is in London trying to get a job at James’ firm. At first we don’t know why but later we discover it’s because James has custody of her son and has prevented her from having any contact with the son since she gave him up. What unfolds from here is two steps forward, one step back for Paisley. She really comes to James with base intentions. Telling you her reasons not only spoil the book but will make the reader dislike Paisley even more.

From an unemotional standpoint, this is an interesting exercise. Let’s take a terrible person with a bad past and see if she is redeemable. For everyone looking for the unheroic heroine, this is her. And the story is full of melodrama from the abuse (which is never dealt with and feels like a ploy to make her sympathetic) to the family drama (she’s treated like a bastard child) to the secret pregnancy and the interference from family members. The psychic angle also went nowhere. It was designed, I guess, to give some insight into why Paisley acts so bad. Everyone is bad, is her justification. From her parents to her sister to even James who went through with the marriage to Carolyn.

At some points I felt some sympathy for Paisley although I thought she brought a lot of the drama on herself. She’s the villain and the hero, as Maleficent says.

Does Paisley grow? Does she become a better person? Or, I guess, does she have to become a better person? What’s the point of the book anyway? It’s a love story, I suppose, even though I felt little love between the two main characters. Or is it just the one person account of how she laid waste to her life and those around her because she had this tragic past? And why am I not harder on James? Because James was a placeholder. It could have been any other dick and the outcome would have been the same. James is simply the projection of her supposed desires. And frankly James grows up where as I’m not convinced Paisley does.

The later conflict in the story is whether Paisley will put her son before herself and that storyline was actually my favorite because in it I saw Paisley finally look beyond her own (many self inflicted traumas) to discover that with maturity comes responsibility. She’d avoided it and her own faults for so long. But it wasn’t enough because I wasn’t convinced of her sincerity probably because her motivation (winning James) was really still primary.

In the end, her relationship with James is probably perfect. They’re two not very nice people who are finally finished with inflicting their source of pain on the rest of the population, you know, except for their son. That’s an objective “good” result.

If you like high drama and don’t mind a barrage of cliches, the writing is decent and the voice is compelling. I’m not going to say a reader will feel satisfied at the end or that the reader will like any of the characters but at points it is hard to stop reading. C