REVIEW: Golem in My Glovebox by R.L. Naquin 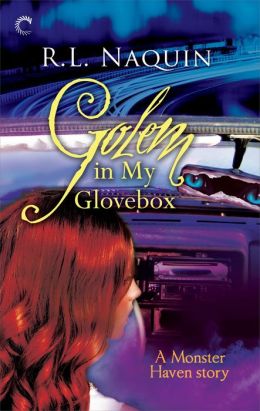 Stepping back into your world, where magical and mystical creatures hide among us with the help of Aegis, Zoey Donovan, was like going to homecoming.  There were so many familiar faces and even some new ones to revisit.  I felt welcomed and embraced from the first page, and couldn’t wait to see what adventures the group engaged in this time.

The end of the previous book, “Faeries in My Fireplace,” found Zoey and her Reaper significant other, Riley together, having freed hundreds of captured Hidden from the clutches of an evil Collector.  The ultimate goal, however, was Zoey’s mother – she and the other Aegises were snatched from their fingers at the eleventh hour.

Now, with the Board of Hidden Affairs in shambles, Zoey and Riley are called on to put their search for Zoey’s mother on the back burner and concentrate on quelling Hidden uprisings around the country until the bills can be paid and the enforces back to work.  If the Hidden reveal themselves to mundanes, the sacred Covenant protecting them all will be shattered, unleashing forces far more dark than a simple under-the-bed monster walking down the street.

As we all know, the investigation into the whereabouts of Zoey’s mother isn’t going to take a back seat.  Yet each event Zoey and Riley go to take care of seems directed at Zoey, personally.  And each event involves the death of an Aegis in increasingly creative and devious ways, with the implication that Zoey’s mother will be the next body found.  Can our intrepid couple, complete with the first sentient golem known to Hidden-kind, find out who’s causing the mayhem and stop them in time?

The romance between Riley and Zoey has fizzled.  As you, yourself, addressed in the book, they found themselves acting more like an old married couple as opposed to a couple still in the honeymoon stage of life.  The chemistry felt, to me, absolutely flat.  It seems as though they do better as friends rather than a romantic duo.  Even after things heated up between them a bit, it was lukewarm, at best.

On the other hand, the plot development and growth of secondary characters was absolutely amazing.  This turned into a more of a fantasy mystery with a few romantic overtones.  The villain is absolutely chilling.  To be quite honest, I can’t pass a school bus now without feeling a shiver go up my spine and I’ve contemplated leaving a light on at night.  We’re not talking full on horror, but something almost gently psychologically frightening.  As always, one of the stars of the show was Maurice, the closet monster.  He cooks, he cleans, he can teleport other Hidden through any closet available, he nurtures everyone who comes into the house – in short, he’s almost the perfect man.  Except for that whole “monster” thing.  And the subplot with the under-the-bed monster from his past, Stacy, is amazingly cute.

The other hero in this tale is Gris – I’m only using the shortened form of his first name.  He has this habit of … acquiring names with each new acquaintance he makes.  Gris is the golem from whence the book’s title comes – given that he turns Zoey’s glove box into his own personal apartment on their road trip across the country for the Board.  I was a little surprised at the depth of character he had (no pun intended).  His backstory alternately tugs at the heartstrings and is a reminder of Pinocchio – only his maker wasn’t Gepetto!

On the whole, I enjoyed the book but I wasn’t utterly in love with it.  I wanted to, but it just wasn’t there.  I was missing the passion between Zoey and Riley.  They were the missing piece that would elevate this from good to great.  The lack of romance acts like that scratch on my glasses I just can’t buff out. C-