REVIEW: Giving It Up by Amber Lin

Your book came highly recommended by author Ruthie Knox. Knox did admit that her view may be somewhat colored by the fact that the two of you are friends. There are moments of incredible loveliness in the writing and I appreciated the challenging characterization you were trying to bring to life, but the story got bogged down by an unnecessary suspense plot and lacked depth for the other individuals in the book. Telling a story in the first person can create immediate intimacy with the reader, but it also requires a deft hand in making the other characters of the book fully realized. 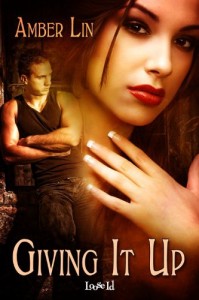 Allison was raped by her best friend. She has a number of confusing feelings that arise out of the rape including how it was her fault, that she could have done more, and how she still loves her rapist. Her lack of self esteem, her trouble finding release in anything but the most degrading sex, were heartbreaking and I wanted to find out more about her life and her redemption.

Allison seeks out anonymous and rough release from club pickups approximately once a month.  One night she spies a brawny tough in her favorite pickup spot and after she spies at least one gorgeous woman getting shot down, she thinks that it is unlikely the tall silent man would have an interest in her.  Yet he does.  Not only does he have an interest, but the taciturn man seeks something from Allison that she doesn’t really believe that she has in her to give – tenderness and intimacy.

The man is Colin and he’s an enigma.  We don’t find out why he is pursuing Allison; and, more importantly, why he’s so understanding of Allison’s personal issues.  The latter is a fairly big issue in the book because Allison’s treatment of Colin provides a certain tension in the romance and unfortunately, the resolution simply limps toward the end.  The two have significant emotional issues; Colin maneuvers Allison into moving in with him against her will; Allison’s supposed search for independence disappears; she resigns herself to Colin’s safe keeping only to have her peace of mind threatened by a romantic suspense subplot and the confrontation with her rapist.

I felt like you were trying to tell an anti romance story, pushing against genre norms and I wanted to appreciate it more. Colin was into organized crime but he was a white knight for Allison. Allison’s best friend was a prostitute.

As the story unspools, I came to believe that this was not a story about Allison’s redemption, but simply one about her imperfect life and her struggle to cope and if that was the story I was being given, I would have been on board.  Yet genre norms kept creeping in such as random couplings of secondary characters (i.e., the prostitute hooking up with Colin’s brother) done for no other purpose that to what? provide sequel bait?

There are so many improbabilities in the book that wear down the realism of the story. Allison’s rape trauma and her subsequent demoralized self esteem was diminished by having her raped by a cop in the hospital room after the rape kit is taken because it appeared over the top and ridiculous. Why not have him come to her house later and do the deed? Placing his aggression at the hospital scene places a surrealness to the story and detracts from the impact of Allison’s suffering. It was as if you were trying to pile on extra victimization so we really really understood that there was no one she could trust. A little subtlety could have gone a long way here.

The voice of the writing was quite nice and I felt like there was a really amazing story somewhere in amongst the messed up plot and the crazy romantic suspense thread. Unfortunately, the emotional arc is never really fully realized, either by having Allison just realize there is no healing or by having her achieve peace in her situation or actually coming into a better place emotionally.

The idea that this ephemeral feeling of “love” that she feels for Colin (although why it is love, I’m not sure) can heal her or somehow make the sexual experience different for her was completely disappointing. C-