Note: Even though I really liked Maya Banks’ contribution to Four Play, I couldn’t recommend the entire book because I didn’t really like the Black story. This is an occasion in which I wish publishers would sell digital copies of anthology contributions separately. 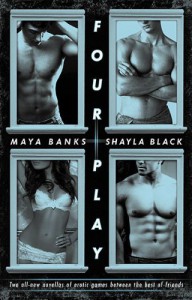 It’s an extreme fantasy. If one good man is a good thing then three good men are great, right? Within the fantasy construct, though, I thought that this story did a pretty good job of touching on some emotional and practical components of a foursome while still maintaining sexiness that the foursome is designed to achieve.

Zoe has this idea to bring Chase’s fantasy to life by renting out a local strip club and being the star attraction. She recruits Broday and Tate to get Chase to the club with other members of the station (no married men, she limits) because it’s not something he would ordinarily do. Her semi-public strip tease is a resounding success and the next day at the fire house, Chase feels ten feet tall (he acknowledges that this is really immature but he loves it anyway).

Around him, the guys stared up at her in awe. They looked back and forth between her and Chase as if they couldn't quite believe what was going on.

Then he saw the jealousy and the lust in their eyes. It hit him with more power than he'd ever imagined in his fantasy. This was his girl onstage, giving him the performance of a lifetime, and his friends were watching, envying him with their every breath.

He glanced back at Brody and Tate and realized then that they must have been in on it. It explained their unease. He almost laughed. They looked a little green, and every time one of the guys yelled something to Zoe or made a motion like he wanted to touch, he thought they were going to resort to violence.

But he saw something else in their eyes. Something they probably didn't want anyone to see. He saw desire and yearning.

Chase wants to return the favor. He saw something in Brody and Tate that night at the strip club, something that confirms a feeling he may have subconsciously suspected. He approaches them about bringing her capture fantasies to life. Each new encounter, each enactment of a whispered fantasy emboldens Chase and he wants to carry out other fantasies until his behavior starts to threaten the relationship of the four of them.

"Are you in love with her?" Chase asked bluntly.

Tate's expression grew impassive. It was like iron bars rolled over his eyes. He was a hard son of a bitch.

"Now that would be pretty damn stupid, wouldn't it?" Tate asked softly. "Falling for my best friend's girl?"

"I didn't ask you if it was stupid. I asked if you were in love with her."

It was one thing for Brody and Tate to yearn for Zoe from afar, but having had a taste of her and what it could be to really have her like Chase has her, makes the living arrangements, the casual relationship nearly unbearable. Zoe and Chase and Brody and Tate all have to make decisions about their future.

Drawbacks to this story is that because a) it is shorter and b) there are so many players, Zoe seems to be swallowed up at times. I would have liked to have seen more screen time with her and her thoughts in this. Some of the optics of the situations, particularly with the foursome seemed awkward at times.

I thought the guy to guy talks were really authentic (as authentic as it can be in this fantasy construct) and that you did a very good job of making an unreal situation seem real. Even the ending, where the four talk about going forward together (and I don’t consider this a spoiler because it’s a romance about a foursome, dammit), addressed a few of the challenges a committed foursome might encounter. B

I confess that your story suffered even greater because of the thoughtfulness of the Banks’ emotional storyline. I’m not certain that there is an emotional storyline in Her Fantasy Men. Kelsey is the object of three men’s affection. Her neighbor Rhys Adams has been trying to wrangle an invitation into her bed since they moved in next door to each other. Her boss, Jeremy Beck, has been fantasizing about his secretary of four years. And Kelsey’s best friend of fifteen years, Tucker Hall, has held her hand and dried her tears and hoped that one day she would be kissing him in passion.

The three of them confront each other one night at a house part at Kelsey’s house.

Which one of you lucky bastards is nailing Kelsey?" Rhys Adams leaned against the back of the sofa, beer in hand, and glanced at the other two men. "It isn't me, and she glows too much to be going without."

Figuring out that none of the three are getting lucky, they band together to figure out exactly what Kesley wants by rummaging through her belongings and hoping to find a private journal and read it. I think one of the major problems in this story is the overweaning skeeviness of it. They know Kelsey is a private person. They decide to invade her privacy, rifle through her personal items in hopes of finding documentation of her most private thoughts because up until now they have struck out with her.

Another example is that Rhys watches Kesley through her bedroom. He has the neighbor across the street watch Kelsey’s house when he isn’t around. We are even treated to a scene wherein Rhys is sneaking into house and has to stay in her closet while she retires for the night. She begins to pleasure herself and unbeknowst to her Rhys is broadcasting her every movement to the other two guys and they all have a weird orgasmic experience. Yes, Rhys was essentially have phone sex with with friend and the boss.

The tone set Rhys on edge. "Fuck off."

"I helped you get into her house with a phone call and a plan,"

Jeremy argued. "Tucker lent you his key. If such a gorgeous sight is going to fall into your lap, you're going to share with us. Or we won't help you with an exit strategy."

Of course, the reason that Kelsey is pleasuring herself is she knows that if she takes up an offer from one of the men in her life, she will lose the others and they each bring a unique gift. She gets hugs from Tucker (or nerdlinger as my friend calls him), dominance from Jeremy (who refers to her as “vixen” or “little vixen”), and impetus to be carefree from Rhys (or peeping Tom).

Then without any notice, Rhys and Jeremy lose all patience and Kelsey’s fine principles come to a grinding halt, one by one. Of course, during coitus they do share their “I love yous” to keep this story romantic. When Kelsey is “punished” by Jeremy for having sex with one of the other men without him, she points out the hypocrisy of this. Jeremy excuses himself because all of his other women were short, curvy brunettes with lush figures. It’s okay for him to have fucked other women because they were just substitutes for her!

What is probably worse is that Kelsey goes from having sex with Rhys to having sex with Jeremy to having sex with Tucker all in the space of about five days with NO CONDOMS. In stark contrast, condoms were used in nearly every sex scene in the Banks book except between the long time couple. You even acknowledge that there is no use of condoms and that Kelsey is not on birth control. OY OY OY. I suppose in this fantasy, it is all about the woman getting what she wants but a foursome isn’t really what the others want and the male characters vacillate between having no backbone and dominating her and fighting over her. It didn’t seem that anyone was really happy in this scenario, particularly Tucker who was SHOCKED that anyone would be into BDSM and then couldn’t wield the spanking hand fast enough. C-