REVIEW: Forever and a Day by Jill Shalvis

I think the first book of yours that I read was Instant Attraction, and I remember being so taken by the smart, capable heroine, the realistic relationship issues in the romance, and the interesting Sierra Nevada setting. It was small town Romance that didn’t read kitschy or cutesy to me, and I loved it. Over the years I have continued to read your single-title small town Romances, hoping for another shot of that “instant” magic. In that time, your books have become more of a comfort read than anything else, because I can count on a certain range of quirky, smart, often commitment phobic heroines, paired with hunky, popular, emotionally damaged heroes. The Lucky Harbor books – both series – are no exception. I have not hated any of these books, and most fall into the B-range. Forever And a Day is probably my least favorite, though, in part because I’m getting slightly bored with the expected, but mostly because I experienced too much dissonance between the light tone and the serious issues packed into the story. 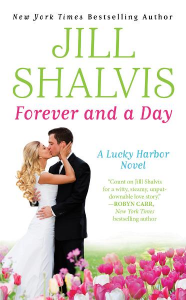 Grace Brooks ended up in Lucky Harbor more or less by accident, having driven from New York to Seattle for a job interview, and from Seattle to Lucky Harbor on the only gas she could afford, with no job and a completely depleted savings. Her New York finance job had gone up in smoke with the economy, her engagement to a doctor her parents loved broke when he expected her to move to England for six years without asking her first, and instead of disappointing the high expectations of her adoptive parents, she had been trying to find her way alone. Once in Lucky Harbor, of course, she strikes up an immediate friendship with Mallory Quinn and Amy Michaels, all of whom make a chocolate and storm-fueled pact to step out of their comfort zones.  For Grace, that means learning how to be happy, instead of just seeking security and the approval of her parents. The problem is, she has much more experience with the latter than the former, and she doesn’t know how to go about achieving something that can’t be attained with a CPA and an outstanding resume.

Josh Scott doesn’t have any time to think about happiness. Besides working as a doctor at the local hospital and volunteering for Mallory’s community clinic, Josh continues to run his father’s medical practice, serves as guardian to his paralyzed and pissed off younger sister, Anna, and has full custody of his five-year-old son, Toby, whose mother left when Toby was still an infant. Soon after Toby was born, Josh and Anna’s parents were killed in a car accident, which has yielded five-plus years of 24/7 overwork and no play. And just recently, Anna gave Toby a pug puppy, Tank, who chews on everything, runs away any chance he gets, and is wholly unappreciative of the sacrifices Josh makes to his family and Lucky Harbor as a whole.

Both Josh and Grace are desperate. So when Josh accidentally calls Grace’s cell phone, believing he is calling a local dog walker, Grace accepts the job offer, figuring it can’t be too hard to walk a puppy. Had that walk occurred without incident, it is unlikely that Grace and Josh would ever actually meet, and while their meeting was hardly a stress-free meet-cute, it certainly establishes the attraction, and the initial pattern of their interaction, as Josh inexplicably gives Grace another chance to permanently lose walk Tank. Well, there is an explanation, one that relies on Josh’s desperation and Grace’s beauteous charms, which, in Lucky Harbor, seems to be enough to get you a house key, room and board (in a guesthouse), and an insanely overgenerous pile of cash.

Okay, I’m exaggerating a little here, but not by much. In fact, it’s not too long before Josh has entrusted not only the puppy he doesn’t much care for to Grace, but also the son he very much loves and whose various nannies have quit and disappeared:

“I’m sorry, Josh,” she said with real regret. “But I think my replacement should be two nannies. And maybe an enforcer.”

Josh called Anna next. She didn’t pick up. Shock. He pictured Toby waiting at school with no one there and his stomach cramped. He sped up while mentally thumbing through the contacts on his phone, slowing at Grace’s name.

Don’t do it, man. She was smart as hell but she was also a really, really bad dog walker. No way should he burden her with his kid too. Except she’d already handled Toby yesterday for an hour, and everyone had lived to tell the tale.

She’d come through for him, twice now. Which really begged the question—exactly who was helping who here?

The truth was, she’d already proven more reliable than half the people in his life. And damn if there wasn’t something in her eyes that pulled him in like the tide, something extremely unforgettable. He knew she was a little lost, searching for something. He had no idea what but he wanted to help. Which was a very bad idea. He needed another person on his plate like he needed a hole in his head, but he couldn’t turn back now. He was drawn to her.

The problems with the novel really start here. Josh has a twenty-one year old paralyzed sister who appears to have no life plan and a really bad attitude, as well as a son who years for the mother who will never return and who spends much of the book barking like a dog to his father instead of speaking. To say that his life is complicated is an understatement. But it’s more than that; the people who depend on him have issues, and he does not have time to address them. And in the midst of all that chaos, he hires a woman he barely knows, in part (large part, I feel) because he’s so attracted to her. So not only is he handing his family over to a woman he barely knows, he’s also doing that instead of simplifying his own life so he could attend to the people who need him the most. The set up is just so problematic for me that I’m on edge before Josh and Grace’s relationship really gets going.

Unfortunately, once it does get going, the conflict between the whole ‘search for happiness’ subtext and the neglect I feel Anna and Toby are getting from Josh’s life choices is just too powerful. In fact, at one point Grace even scolds Josh for not being there for Toby when he lost his tooth. And yet Grace’s appeal to Josh is part of the reason for Josh’s lack of attention, even as she has taken on some of Josh’s responsibilities as father and brother, becoming a mother and sister figure for Toby and Anna. It’s a dynamic that works only as long as you view Josh as selfless, instead of as selfish. Which, for me, meant ignoring a great deal of the book.

For example, the night Josh makes a critical decision, he comes home from his medical practice and finds Grace in the pool. Soon they are enmeshed on a lounge chair, Anna likely on a date with her no-good boyfriend, and Toby at a sleepover. Hot and heavy on the chair, Grace and Josh are interrupted by Anna, who rolls her wheelchair outside to inform Josh that Toby had been “demon-dialing [him] for half an hour.” It’s not only a reminder to Josh and Grace that there are other people who depend on them, but it’s a reminder to the reader, as well, and one that I found much more important than the relationship between Josh and Grace.

However, the set up of the book intertwines the two in such a way as to make Grace’s transition into the family seem natural and inevitable. Which, while perhaps satisfying some Romance devices, was troubling for me, because she so often substitutes for Josh, and I just cannot see her as pre-destined mommy/sister without viewing the difficulties as unrealistic. Because if I am supposed to treat them as realistic, I am going to be worried about much more than Josh and Grace’s interrupted poolside sex; I’m going to worry about the fact that Toby has had a revolving door of nannies before age six; that nanny number whatever (Grace) is getting involved with his father, that Anna’s anger over her paralysis and the loss of her parents is not being addressed, and that her boyfriend, who Josh believes is only after the settlement money Anna soon has coming to her, is a jerk who wants to take Anna’s virginity, whether she’s ready or not. None of these things makes me comfortable with the relationship between Grace and Josh, even though (and perhaps especially because) the relationship also seems to drive all these things. Consequently, I am left believing that Toby is going to be one screwed-up adult, that Anna is going to need years of therapy, and that Josh and Grace have ultimately placed their own needs above those of others, which is, I’m quite sure, the exact opposite of what I’m supposed to get from the novel.

Taking a minute to look back at the three-book series, I think the second book, At Last, is my favorite of the series (a solid B), because the one relatively serious subplot involving a runaway girl is used as a mirror for the heroine, not completely intertwined in Amy’s romantic journey. It’s a relatively obvious mirror, but still one that doesn’t interfere with the romantic trajectory of Amy and Matt’s relationship. The first book, Lucky In Love keeps most of the drama between the hero and heroine, and while the book felt a little clichéd, with the good-girl heroine and the wounded alpha male hero, the writing was competent and the formula worked for me (B-). Forever and A Day is also competently written, and it has some of the fun girl-humor I enjoy in Shalvis’s books, but I felt that the central conflict in the book (responsibility v. happiness) was just too serious for its handling, belittling the very problems the book relies on to facilitate the love match. So despite the enjoyable moments, it’s ultimately a C- read for me.