While historical romances aren’t my favored genre, I do love paranormal romances. If I pick up a historical, more often than not there’s a whiff of the paranormal in it. I remember first hearing about your debut novel several months ago and it sounded interesting enough that it stayed on my radar. As I was warned, Firelight is certainly a mix of many different genres. I’m all for genre-mixing, but I’m just not sure it worked here. 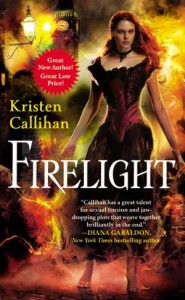 The youngest daughter of a destitute family, Miranda Ellis was born with an unusual gift. She has the ability to start fires, and I don’t mean with matches. In fact, it is because of this firestarting ability that her family is penniless. To survive, Miranda has taken to using her pretty face (and other, ahem, assets) to steal.

That ends when Miranda is forced to marry the infamous Lord Benjamin Archer, who wears a mask to hide his disfigured face. Miranda is resigned to her fate but complications arise when Archer becomes the main suspect of a series of murders. The victims were all prior acquaintances of Archer’s and more importantly, were known to be on poor terms with him.

Despite his reputation, Miranda knows that her husband can’t be responsible. She sees the goodness in him. She embarks on a quest to discover Archer’s past in order to learn the mystery behind his mask and why he hides his face from the world. But in doing so, she attracts the attention of the real murderer and may soon become the next target.

I realize a lot of this is the result of my preferences. I know I’m particular when it comes to worldbuilding. I don’t like it when things are dropped in without any explanation whatsoever and I’m just supposed to accept it. As a reader, I’m already accepting that there are fantastical elements which, let’s be fair, is a pretty big suspension of disbelief. I need a little more grounding to avoid frustration. In this case, I’m specifically talking about Archer’s “disfigurement.” What was up with that? I was torn between rolling my eyes at the tweeness and going WTF at the random tossing in of Egyptian mythology.

This in turn brings us to what I consider the major flaw of the novel. There’s a fine balance when you draw out a mystery. It can increase tension or it can become outright annoying, thereby having the opposite effect of slowing down the narrative. While it was initially novel to speculate about Archer’s disfigurement and presumed paranormal dilemma, this soon got tiresome. And the more tiresome it got, the less engaged I became. It was very easy for me to put this book down. I sometimes forgot I was reading it and had to force myself to pick it back up. By the time we learn Archer’s secret, the revelation was so anticlimactic I found I couldn’t care less.

At its heart, this is a Beauty and the Beast story. Unfortunately, the romance left me cold. I understood why Archer loved and adored Miranda. But I never quite followed why Miranda began to reciprocate. Whether or not this romance works for a reader will depend on that reader’s tolerance for couples who lie to each other. Miranda and Archer spend the majority of the book lying to one another. Miranda doesn’t tell him about her firestarting abilities. Archer doesn’t tell her about his past, what he knows about the murders being pinned on him, or about his disfigurement. This type of storyline is one of my least favorites. They kept lying to one another and shutting each other out, so I failed to see any lowering of defenses or the emotional intimacy I like to see in romantic plots.

Overall, I found this book to be unfocused. That could simply be due to the fact that I was so irritated with the drawing out of Archer’s mystery disfigurement that I began to notice other flaws. It happens. In theory, I thought the various elements should go well together but they came off as jumbled to me: Archer’s mystery disfigurement, Miranda’s firestarting ability, the murders, Archer’s rivals and enemies – one of whom keeps flirting with Miranda and may not be entirely human, a mysterious woman who may be Archer’s ex-lover, a mysterious club that Miranda cannot track down and so on. I guess I expect a certain level of depth to any given plot element and when you have too many in a book of this length, it starts becoming a bit shallow.

I can see why some readers would enjoy this book. It has a gothic sensibility to it. It’s very reminiscent of Phantom of the Opera. For all that I found Archer’s secret to be underwhelming and perhaps a little silly, it was fairly original. I don’t say that often when it comes to paranormals. But despite all that, I’m afraid this book just didn’t work for me. C-